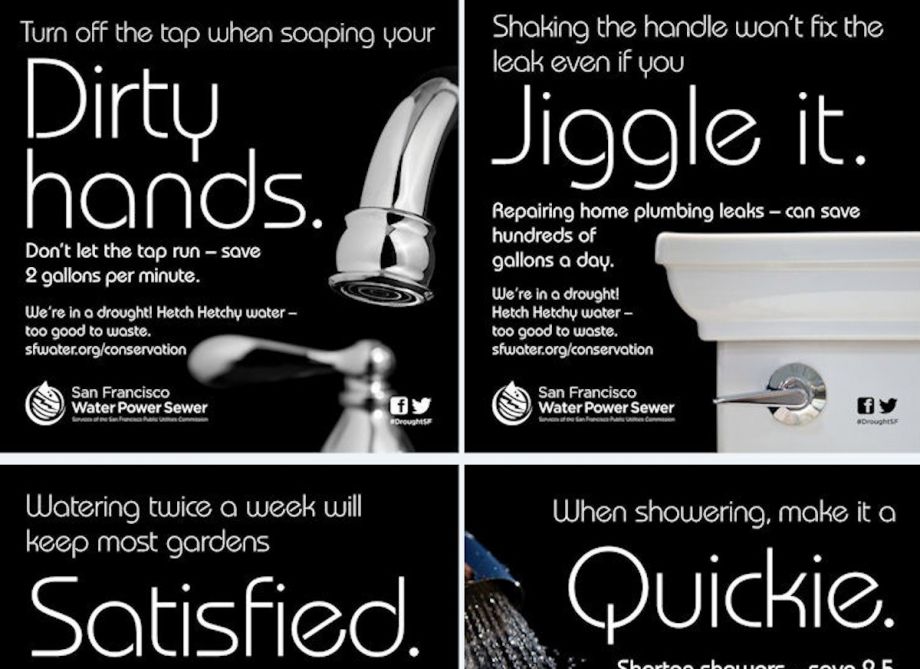 In dust-dry California, gone are the days of rock garden incentives and polite PSAs. When Governor Jerry Brown ordered a mandatory 25 percent cut in urban water use this spring, he traded last year’s pleas for costly penalties. Now, water suppliers that exceed state-imposed restrictions could eventually face up to $10,000 a day in fines.

That’s a lot of money, especially considering the fact that Golden State residents failed to heed Brown’s 2014 call for voluntary conservation. Last year, the Governor asked for a 20 percent reduction, but from June 2014 to May 2015, Californians only used a cumulative average of 8.6 percent less than the previous year, according to the state Water Board.

Not surprisingly, municipal utilities have spent the last few months upping their game and switching strategies, from letters reminding residents that their meters are being watched to sprinkler restrictions, hand-watering limits and fine threats that make traffic citations look appealing.

Then there’s the San Francisco Public Utilities Commission, which has taken a more “Mad Men”-style approach and proved, yet again, that sex can sell anything, even voluntary water conservation.

First, some background. The Water Board is mandating an average reduction of 25 percent statewide, but each city received a separate target based on a figure called R-GPCD, or residential gallons per capita per day. Districts that already use less received a lower target.

San Francisco’s new target, 8 percent, is one of California’s lowest. The reason, explains S.F. utilities commission spokesperson Tyrone Jue, is that residents in the Northern California city only use an average of about 44 R-GPCD. When the Water Board released calculations in February, the statewide average was 76.7, with the Colorado River hydrologic region (i.e., inland Southern California east of the San Bernardino mountains) using a high of 165.6.

“San Francisco historically has maintained one of the lowest per capita figures in the state,” Jue writes in an email.

But as Jue outlined in April, those low numbers tend to make additional conservation even more challenging. So last year, officials turned to a tried-and-true attention grabber: the words “Doing It.”

Called the “Water Conservation Is Smart and Sexy” campaign, the strategy featured several ads. One read, “When showering, make it a quickie” (“quickie” was blown up in giant font); another stated, “Shaking the handle won’t fix the leak even if you jiggle it” (yep, “jiggle it” was blown up); a third instructed, “Replace your old toilet and get paid for doing it” (guess). A TV ad combined mood music with a voiceover about turning off faucets while washing “those dirty hands.”

Since last June, when the ads launched, residents have exceeded the voluntary reduction (10 percent) requested by the commission — part of the reason its new mandatory number is so low. Jue says that despite the threat of state-imposed fines, the agency still plans to issue citations only as a last resort.

“I truly believe in the spirit and willingness of our customers to step up,” he writes. “For those very select few that intentionally remain tone deaf to our need to conserve and if they still don’t respond after multiple attempts, we may then resort to fines.”

But as I detailed in April, cities like San Francisco have a distinct advantage in the area of water conservation — and it’s not just a made-you-look ad campaign. Put simply: They’re dense with few front lawns.

According to Joe Flores of Burbank Water and Power, cities like Burbank (residential, single-story homes, yards) tended to receive higher numbers from the state.

“Most people don’t have an appreciation of where water goes,” he says. “They think they have to take shorter showers, but outdoor watering is by far our largest use of water.”

Burbank residents need to slash water use by 28 percent — not Beverly Hills’ 36 percent, but still, in Flores words, “a seriously deep cut.”

The city needs to meet state mandates quickly — otherwise it could begin to see those fines threatened by the Governor. (Cities need to meet their reduction targets by February 2016. If they don’t, the daily fine kicks in then until they do. The goal is cumulative, so if Burbank doesn’t reduce enough in June, it could still make up for it in July and so on to get down to that average goal — but then residents would need to conserve even more.)

The utility has publicized a strict watering schedule and will be penalizing residents who flout it: $100 for first-time offenders, $200 for second offense, and $500 after that. But although citations will play a role going forward, Flores still sees public education as key.

“What we’re hearing from our citizens here in the city is that they understand the severity of the drought, but they’re not sure if their specific actions are going to make a difference,” he says.

Accordingly, the utility is undertaking a customer outreach campaign (sorry, no sensual music) under the heading “Burbank’s Billion Gallon Challenge.” A page on the utility’s website acts as a visual calculator of exactly how much residents need to save alongside an array of actions, including introductions to recycled water, offers of free, low-flow shower heads and turf-replacement rebates.

And Flores says that despite the large number, he’s confident the city can make the necessary cuts.

“When we first started talking about the drought we heard a lot of pushback,” he says, adding that as California’s dry spell continued, community advocates began to rally around conservation. “Now the tone in the community has completely changed.”

And if all else fails, there’s always the San Francisco approach: Paste “Jiggle It” in giant print on the side of a bus.