Building on Chicago’s Legacy of Community Development Banking – Next City 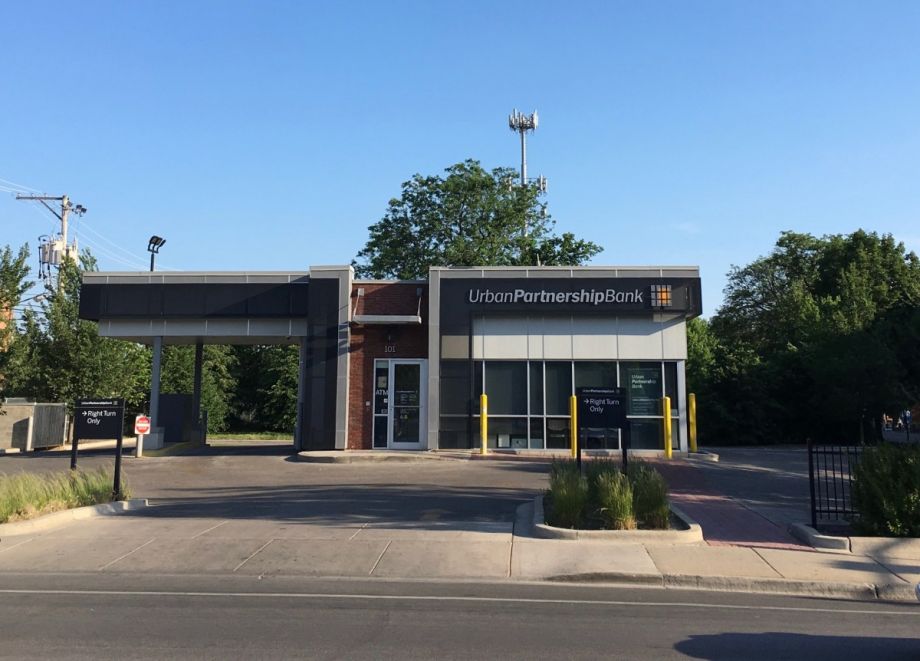 The corner of Michigan Avenue and 35th Street on the South Side of Chicago is nondescript. The area is a part of the city’s historic Bronzeville neighborhood — but today, the spot seems to offer little but an empty lot on the one side of the street and a mundane shopping plaza on the other.

To Megan Hryndza, however, a block like this one holds a key to the development of Chicago — and potentially every city in America. That’s because a local financial institution focused on community development is located here.

Hryndza is a founder of Mighty, a business aimed at supporting consumers who want to use data on community commitment and impact to choose their banks. As Next City covered previously, the organization aims to make that possible by turning complex government reports on each of the country’s roughly 5,000 banks into a single user-friendly online database. During an event in Chicago’s Hyde Park neighborhood last week, Hryndza explained the organization by analogy: “We’re like Trip Advisor for banks,” she said. Behind her, a Powerpoint read, “Americans put 40 percent of their money into 0.1 percent of banks. Know the other 99.9 percent.”

The purpose of adding consumer intentionality to banking is not just to maximize personal benefits or convenience. Mighty also emphasizes that banks use deposited funds for loans and investments and that, by placing money with banks that will use this money for good, the average consumer can contribute positively to community development or devote their cash to a cause.

The Hyde Park event, which was titled “How to Pick a Community-Focused Bank” and organized as part of citywide festival Chicago Ideas Week, offered interactive demonstration of the database and a panel discussion about banking experiences. Presenter Daniel Ramirez-Raftree, 26, a banker, hewed closely to the central theme of the event, saying, “Your bank could be more than convenient. It could be something meaningful,” adding, “The good news is that you don’t have to choose between convenience and doing good. You can have both.”

Response to the idea was thoughtful but mixed.

Audience member Elizabeth Dwyer, a professional who said she works in “the finance-for-good field,” was hopeful that a community focus could hold sway over bank choice. Although she felt that convenient features like online bill pay are essential to “close the deal for the vast majority of customers,” she compared the idea with another intentional choice that has arisen in the last decades: “To me, the idea of being intentional about your bank seems very akin to organic shopping,” which likewise involves “getting the same [product]” while pursuing a large mission.

Meanwhile, participant Tricia Scully was uncertain about the database’s usefulness to communities. She said, “I love this sort by community financing hubs [feature]. It’s just amazing to see the banks that are 100 percent focusing on Chicago … It’s really good to be able to have that short list.” But Scully, a former loan officer at a microfinance institution, noted that community-focused depositing was “not a quick fix” for the problems of underdeveloped communities.

Mary Houghton, a retired financier and bank founder who serves as an advisor for Mighty, felt that the organization’s effect on banks seemed the most potent immediate effect: “I think that the first thing that [Mighty] is doing is working with banks to get them to compete [and] differentiate themselves by mission, not just by profits.” But she, too, was uncertain of the effect on consumers. “This is a really complicated business idea, that you could actually understand all the data around banking so that people could really act … It’s got a long way before it’s a movement.”

The mix of hope and uncertainty reflected similar characteristics of the banks on which the event focused. Tacit within the event was the reality that the banks on Chicago’s South Side — including prominent ones that panelists and participants discussed — are in some cases struggling to survive in their current, in some cases historic, form.

During an interactive exercise that permitted event participants to deposit up to $250,000 in fictional money into up to three banks, participants placed 25.69 percent of the total into Urban Partnership Bank, by far the most popular option. (The next-highest tally was 15.30 percent.) Earlier, panelists had also repeatedly mentioned this institution, a community development bank founded in 2010.

Although it went largely unspoken, some panelists and participants clearly knew the bank’s backstory. Urban Partnership Bank was the successor of ShoreBank, an institution founded by Houghton and others in 1973 to ameliorate the lack of banking services on the South Side. Before becoming insolvent during the Great Recession, ShoreBank was arguably the best-known of US community development financial institutions, or CFDIs, a subset of financial institutions federally certified for their focus on investment in low- and moderate-income areas.

At ShoreBank’s dissolution, Urban Partnership Bank formed to acquire its deposits, its mission, and much of its leadership — and, because of both the earlier institution’s prominence and the South Side’s enduring lack of banks, Urban Partnership also took ShoreBank’s place as one of the most well-known financial institutions on the city’s South Side. For those reasons, its prominence in the minds of event attendees was unsurprising.

Yet nobody clarified the bank’s recent change in status. In September, Urban Partnership announced it was being acquired by another bank, Providence Bank and Trust — based in a Chicago suburb — that lacks its intense community development focus.

Ramirez-Raftree, a financier who began his career at Urban Partnership and remains its customer, comments on the change: “It might be a prudent move, in the sense that if they keep their community focus and expand their services to the public, I see that as a good shift. That said, I don’t know much about Providence Bank.” His words pointed out an issue with Mighty’s mission: bank acquisitions that shift accounts from one institution to another scuttle consumers’ ability to understand and control where their deposits are used.

“That’s the reality of the marketplace,” Hryndza concedes in an interview before pointing out that this situation is one in which Mighty is especially helpful. The database, she says, is “giving that level of transparency—[Providence] is not a CFDI, but this is where [its] deposits are going.” This, she says, is “helping each individual reconcile what was the old bank and what is the new bank … so they can make an empowered choice.”

And that’s true whether Urban Partnership Bank — including its branch located at the corner of 35th and Michigan — remains a place where community development happens or not.