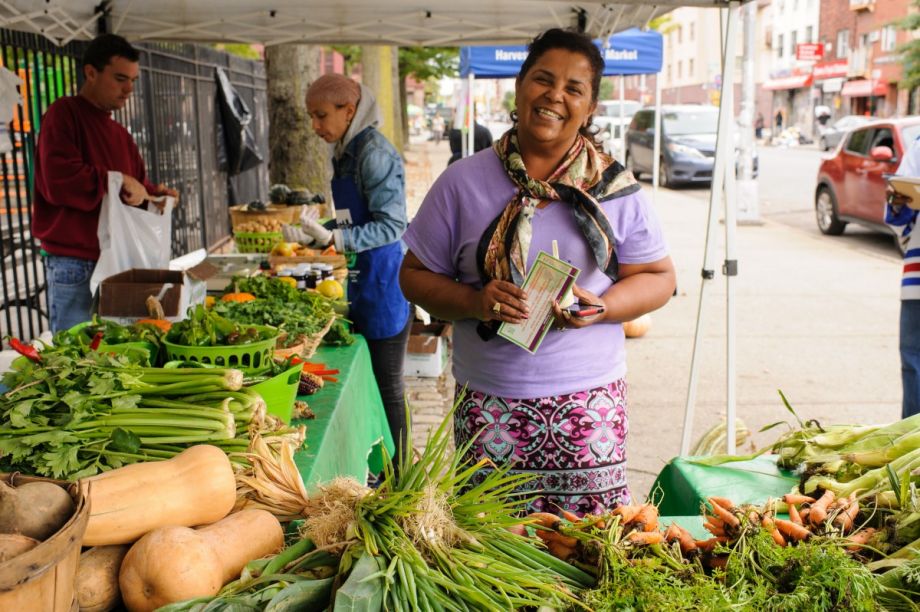 A farmer’s market that works in partnership with the Communities for Healthy Food program in Bed-Stuy, Brooklyn. (Photos by Reeve Jolliffe at Gas Tower Studio)

The 48-year-old mother of two already had oranges, apples, and plantains in her grocery cart when a pantry volunteer encouraged her to take some canned peaches and pineapples.

“We like both of those,” said King cheerfully as she added the cans to the cart. King filled it with green peppers and squash, canned salmon, peanut butter, bran flakes and non-fat yogurt before steering to the checkout with enough groceries for a week, she reckoned. “Oh yeah, that’s a wrap,” she said.

Golden Harvest is just one component of Communities for Healthy Food NYC, a pioneering approach to combatting high rates of obesity, diabetes, heart disease and other diet-related health conditions in targeted high-poverty neighborhoods. It does this by bringing better foods and food awareness to residents like King. The initiative is a partnership between the Local Initiatives Support Corporation (LISC) New York City and community development corporations with deep roots in their neighborhoods—two in Brooklyn, one in the Bronx, and another in Harlem.

While Communities for Healthy Food’s immediate goal is to foster healthier eating in parts of the city that need it the most, the ultimate aim is something more ambitious, says Rick Luftglass, executive director of the Laurie M. Tisch Illumination Fund, which provided $1.6 million in funding to kick-start the effort with the New York office of the Local Initiatives Support Corporation in 2013.

“We’re talking about food in the larger, more holistic sense—issues like access and affordability, health disparities, and employment,” said Luftglass. “We’re addressing it with a laser-like focus that we feel can actually move the needle on improving people’s lives.”

Community chefs are trained to teach cooking classes and lead demos for Bed-Stuy residents. This demo is co-led by Community Chefs Melanie Vergara and Amanda Ash at the farmer’s market.

To make this happen, Communities for Healthy Food has infused access to, and education about, healthy food into all facets of these agencies’ programming. Staffers researched neighborhood assets by looking at health centers, programs in schools, food stores, community gardens and other sources of food and nutrition education. Where there were gaps—for example, if a neighborhood needed a food pantry, farmers market, assistance for corner stores or free cooking classes—they brought in agencies that were doing relevant work elsewhere in the city. Or, they helped neighborhood organizations enrich the services they already provided, as with Golden Harvest.

Communities for Healthy Food has also placed “Community Healthy Food Advocates” in affordable housing buildings, public schools and commercial and community spaces, where they organize family cooking courses, organic gardening classes, food-industry job trainings, and even movie nights with feature films related to food—complete with healthy snacks that tie in to the theme of the night, like the healthy soul food that accompanied the documentary “Soul Food Junkies.”

The strategy of using food access and education as a community-building tool and integral component of revitalizing entire neighborhoods dovetails with a broad, cultural movement: food has become an object of intense interest, not just on the Cooking Channel and in the restaurants of celebrity chefs, but in homes and markets in every neighborhood of the city.

“Food is the ‘in’ thing,” says Melony Samuels, executive director of the Bed-Stuy Campaign Against Hunger in Brooklyn’s Bedford Stuyvesant neighborhood. Her organization not only operates food pantries, but has also built four organic farms in Brooklyn and Queens, where clients diagnosed with hypertension, obesity and diabetes can exchange vouchers for the high-quality, locally grown fruits, vegetables and eggs that usually are only available in the city’s priciest markets. She has plans to launch a hydroponic farm soon.

“What I see are youths getting involved at our gardens, changing the way they eat, then impressing that on their parents,” says Samuels. “They learn how important food is to the community, and they want to talk about it.”

At New Settlement Apartments in the Bronx, young people from Bronx Helpers learn hands-on cooking skills and teach the community about nutrition through the “Teen Battle Chef” program.


Making healthy food accessible in ways that are relevant to residents’ lives drives the Communities for Healthy Food approach. In Brooklyn, Golden Harvest, which is owned and run by the Northeast Brooklyn Housing Development Corporation (NEBHDCo), has been supplying free, emergency food to low-income residents for 20 years. But recently, the pantry switched to a model of distribution known as client choice. Instead of handing out a pre-packed bag of groceries, Golden Harvest invites clients like Yvette King, who lives in a family shelter nearby, to select from a wide range of healthy foods using a point system tailored to the size of their households. Since converting from the packed-bag model in 2014, the food pantry’s clientele has more than doubled in size, thanks in part to improved outreach but also because of a cost-free supermarket-style experience that lets clients select the foods they want.

In the South Bronx neighborhoods where another partner, New Settlement Apartments, operates, roughly one third of residents are obese, according to the New York City Department of Health’s Community Health Survey. Over 16 percent of residents report having had diabetes—more than five times the rate in some of New York’s wealthiest neighborhoods—and rates for high cholesterol and high blood pressure also significantly outpace the city’s averages. LISC doesn’t claim to be able to erase these disparities, but healthy food is fundamental to any change.

Taisy Conk, the Community Healthy Food Advocate at New Settlement Apartments in the Bronx, extolls the virtue of vegetables.

And as with any neighborhood initiative designed to improve the lives of residents, progress is measured on the ground and in small increments.

Outside a C-Town Supermarket on bustling Jerome Avenue on a warm summer evening, Leeza Peña, 18, and Nyeem Gunn, 14, young volunteers who are part of a program called “Bronx Helpers,” circulated among rush-hour shoppers armed with smiles and plates of fruit kebabs. Made from ingredients immediately available at the market inside—grapes, melon, mozzarella, yogurt and honey—the tasty, low-fat fruit sticks were intended as healthier options to pre-packaged snacks loaded with sugar.


“Getting people to change the way they eat takes time, so we start small, with just the simple idea that you can make cheap food and healthy food at the same time,” said Peña, who approached one shopper after another with kebabs and recipe sheets printed in English and Spanish.

Gunn offered himself as an example of how people’s diets can improve. Before he became involved with the Chefs for Change program at the Bronx Helpers, “whenever I got money I would go down the block and buy a bag of chips and an Arizona [iced tea].” Now he sees himself as an agent of change that’s slow but significant.


“You learn to do the math yourself and realize that if you keep that up, you’re going to end up with diabetes.” Gunn says he still eats burgers, “but not nearly as often,” and has convinced his mother to buy sea salt and to sprinkle less of it on the dishes she prepares. Meanwhile, he says, the family of one his friends just started making their own juices. “I definitely think there are people in this community who know what it’s like to eat healthier,” he says.

One of the ongoing challenges of the South Bronx neighborhood is food quality, even though the area is served by four supermarkets, smaller groceries, and Green Carts selling fruits and vegetables. “There’s a persistent suspicion that the people who supply our produce are selling food that’s going to go bad in a day,” says Taisy Conk, a Community Healthy Food Advocate at New Settlement Apartments in the Mount Eden section of the Bronx.


By supplying wholesome—and tempting—choices, and by making the chain of supply more transparent, Communities for Healthy Food hopes to change that perception. In the Bronx, the initiative has partnered with Corbin Hill Food Project, a farm-share program upstate New York, to operate a Wednesday evening farm stand at the New Settlement Community Center. Customers pay $14 a week (or $7 with SNAP benefits, formerly known as food stamps) for a box of vegetables, often including neighborhood favorites like cilantro, collard greens, and kale, and at least one fruit. Parents, grandparents and children enjoy shopping there together, sampling new recipes and taking part in farm share-sponsored events like the annual Family Food Fest.

“It works on more or less the community-supported agriculture model, except that it’s cheaper and more flexible: you can pay by the week, and you don’t have to sign up for months at a time,” says Conk of the popular program. “It’s one of the ways we’ve been able to fill a gap in the neighborhood and build a community gathering place for celebrating good food.” It’s also a way for residents to see more clearly where their food is coming from.

Yemi Amu leads a gardening program for teens at the Turn Up Garden in Bed-Stuy.


Residents involved with Communities for Healthy Food are also growing food at sites around the city, including in the backyard of the Golden Harvest Client Choice Food Panty in Brooklyn, where onions, peas, lettuce and other greens grow in neat rows along with strawberries in plastic buckets.

The plot partially supplies the food pantry and, as the focus of a youth gardening project, it also serves as a classroom where young people learn about food justice, thinking critically and growing organic produce in the middle of the city. “It’s an effort to improve health and raise consciousness all at once,” says Bianca Bockman, a Community Healthy Food Advocate at NEBHDCo.


To measure the program’s impact in the targeted neighborhoods, researchers with the New York City Food Policy Center are documenting shopping and eating habits, nutrition knowledge and other indicators of individual behavior. They also look at the effect on the neighborhood environment: are there more farmers markets, healthy bodegas or active community gardens making fresh produce available to residents? Have community ties grown stronger as neighbors become engaged around nutrition and food justice?

Bockman, who grew up in government-subsidized housing in Hoboken, New Jersey, and identifies with many of the young people she works with, thinks so. But she notes that real change must be rooted in individual residents’ attitudes about what’s possible. “Food pantries don’t alleviate poverty, they give you some food when you’re in a tough spot,” she says. “We have bigger dreams. We want people to feel like their community is worth fighting for.”

Patrick Rogers is a culture and urban affairs writer in New York City.