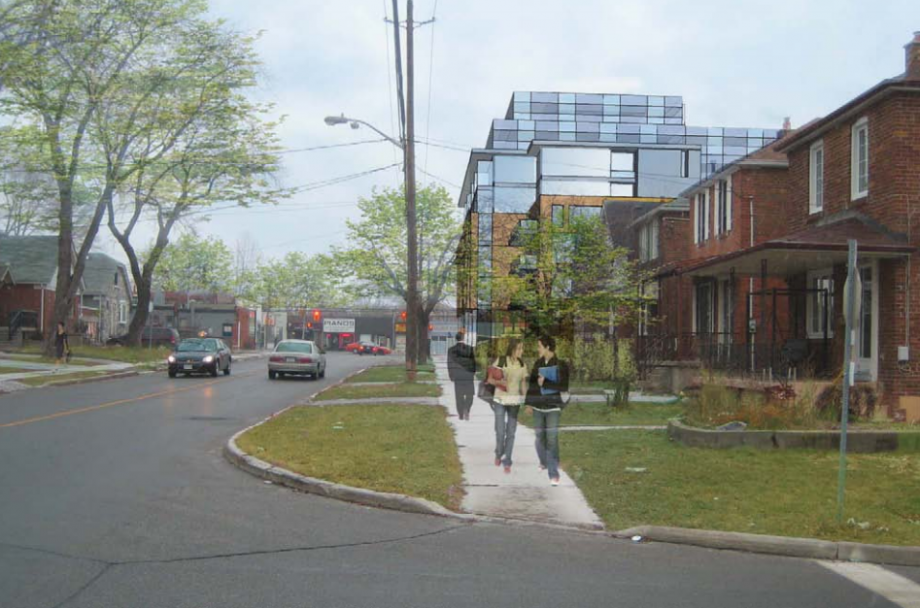 A two-story-high change in Ontario’s building code could help to increase density and ease affordable housing strains in the city of Toronto. As of January 1st, developers can now construct wood-frame buildings up to six stories; the previous height limit was four stories.

The booming Canadian city has been struggling to integrate its dual needs of housing and transit, and this change could certainly help with the first. In 2010, the planning department put forth its Avenues and Mid-Rise Buildings Plan, which called for the development of five- to 10-story multi-use buildings along arterial streets.

“What the city had been looking for was a gentler way of intensification along these avenues,” says Lorna Day, from Toronto’s planning department. “They form the edges of our neighborhoods as well as a frontage to our transit system.”

Sites once considered too narrow are now open for consideration for redevelopment now that they can accommodate taller, income-generating properties. “What this will do will make redevelopers look at these smaller lots and realize that they don’t need a 100-foot frontage on a corner in order to make redevelopment more feasible,” says Day.

Advances in wood-frame construction allow more ambitious heights while still maintaining fire and structural safety, and Day notes that wood, as a material, is cheaper. Additionally, this type of construction is more flexible than steel and concrete. Walls, stairwells and even elevator shafts can be pre-fabricated off site and then erected relatively quickly on site — an advantageous efficiency when it comes to putting together financing packages that fund developments.

Some experts say that this type of construction could be up to 20 percent less costly to produce, and these savings could be passed on to renters. Nonetheless, Day is cautious about making promises.

“It’s a crystal ball question about whether this will ease [affordability concerns],” she says. “I don’t foresee this change happening overnight. I think that this is something that the industry needs to test for a while. If you delve into the details of the code, it’s still pretty restrictive. You’re not going to get big buildings out of this. But, my understanding is that this form of housing could be more affordable on a cost per square footage basis.”

Fire officials are uncommon partners in planning conversations, but they worked closely with Toronto and Ontario planners and building officials to make sure that the code change guaranteed safety, as well as supported the city’s other planning initiatives. Another surprising stakeholder in the mix is Ontario’s forestry and wood industry, which sees the move as a boost to Northern Ontario’s economy.

The subtle change might not see much in terms of immediate results, but it’s just one of the ways that Toronto’s planning department is pushing the envelope.

“From a buildings perspective, this is the loosening of one screw to help this initiative of getting more housing on our avenues,” says Day.