Building a Post-Colonial Community Starts With Vocabulary – Next City 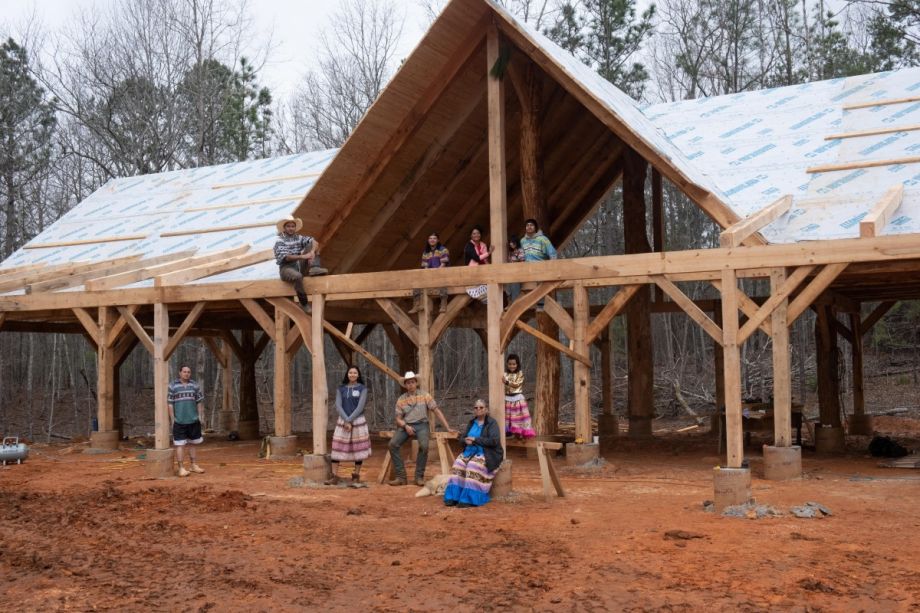 Members of the Indigenous Maskoke community stand on the site of their Timber-Framed Community Center in the Ekvn-Yefolecv ecovillage. (Photo courtesy of Ekvn-Yefolecv)

“Intentional communities” are on the rise in the United States as more and more people see the value in stepping outside of consumption-heavy American life and its corresponding deluge of nonstop media, unhealthy lifestyles, disregard for the environment and the economic rat race. One such community, situated on 577 acres of Alabama woods, however, has a higher intention: Building an ecovillage where their endangered language—Maskoke—can thrive in a way it can’t in modern settings, spurring a return to many parts of their ancestors’ pre-colonial way of life.

The community, the Ekvn-Yefolecv Indigenous Maskoke Ecovillage, is based in what is now called Weogufka, Alabama, and was first imagined 16 years ago by community activist and ecologist Marcus Briggs-Cloud. Growing up, Briggs-Cloud assumed most Maskoke people could speak the language.

“But when I became a teenager, I looked around and I didn’t see anyone younger than me that could speak our language,” he says. “That’s when I started to get nervous.”

That realization led him to study linguistics at the University of Oklahoma, where he eventually taught a course on the Maskoke language. Teaching, however, led to another realization: Not only is it impossible to learn to speak an endangered language in a classroom, but Maskoke does not always offer the vocabulary students need to describe their modern lives.

Communities who speak an endangered language often solve this by forming committees to make up and vote on words for contemporary terms to describe new technology, scientific processes and products. Initially, this idea excited Briggs-Cloud, but his eagerness was short-lived.

“I realized that by the time you dump 3,000-plus words in your lexicon that are inherently premised on post-industrialization capitalist ideology, we so significantly deviate from the traditional ethos that our ancestors left to us in the first place,” he says. “And if we’re going to do that, it begs the question of why not just speak English?”

While the English language is constantly adding words to express new concepts and inventions, the Maskoke language traditionally evolved in accordance with the natural world. Instead of pushing Maskoke to keep up with English, Briggs-Cloud became interested in materializing a community where the indigenous language could thrive without being altered drastically to express the demands of Western life.

That idea became the basis for the Ekvn-Yefolecv ecovillage. Briggs-Cloud and members of the nascent community purchased the physical land in January 2018, and while the ecovillage is still in its early stages, the theory behind it is so far proving successful. Language was the impetus, but reclaiming the Maskoke identity in its most authentic form has also led the ecovillage to decolonize nearly every aspect of life — from finances to diets to their built environment.

“My theory was that if we could recreate a society wherein everything we did we have vocabulary for, then our language would really thrive and preserve the philosophical integrity that is unique to Maskoke people instead of create a mirror image of English,” says Briggs-Cloud, who is now the director of Ekvn-Yefolecv, along with his partner, Tawna Little.

Five years before they even had a physical space, Briggs-Cloud and his community members established a Maskoke language school, which reinforced Briggs-Cloud’s theory. All of the students — including Briggs-Cloud’s two children, who have never heard him speak English — were pre-verbal and being raised with Maskoke as their first language. Many began having the same experiences his college students did of not being able to communicate their experiences out in the Western world.

“They would go to Disney World or Dave & Busters and want to talk about their experience, but we don’t have the vocabulary,” he says. “At a young age, they struggled to conceptualize the negative implications of extractive economy that we sought to teach them, and they were quickly growing to routinely desire participation in it.”

Languages reflect the worldview and culture of those who speak it, and Maskoke is no different. The young Maskoke speakers struggled to express their experiences with capitalism because it’s antithetical to the Maskoke language and ethos. Collective ownership of anything other than one’s body parts and family is constrained by the grammatical structure of the language. You wouldn’t denote personal ownership over land, for example. In the ecovillage, however, where resources are shared and life is lived communally, students have all of the vocabulary they need to express themselves and navigate their daily life.

Currently, the village has 16 permanent members and 42 transient members who all have a role in keeping the community thriving. There’s certainly no shortage of projects: They’re carrying on traditional Maskoke ecological knowledge via foraging for food and medicine on their property and reintroducing sturgeon, historically an important animal in the Maskoke diet, to the local river. Sturgeon also serve as host species in an on-site aquaponics facility. A flock of chickens provides eggs and the village grows much of their own nutrient-dense food in a greenhouse. Residents are stewarding a herd of bison which were native to the region before the Maskoke people were removed from the area. Through all of these projects, the community is committed to regenerative agriculture — farming principles and practices designed to mimic nature.

“Engagement with agrarian life daily renews our relationships to non-human living beings and supports the ability to articulate our Maskoke language, anywhere from laughter derived from recounting animal behaviors to discussing daily work responsibilities,” he says.

These initiatives aim to both improve the holistic health of the community — indigenous Americans continue to die at higher rates from diseases including liver disease, diabetes and respiratory illnesses, according to Indian Health Service — and help the residents step outside of the Western, capitalist system in fulfilling their daily needs. The community brought in a dietician to train them in how to cook healthy food, and in that same vein, alcohol, drugs and junk food are banned from the community. For some, these are a deal-breaker, but Briggs-Cloud sees it all as part of decolonizing their diets.

“We can’t save the language when our elders are dying in their 60s of chronic illnesses and taking the language with them,” Briggs-Cloud says.

Likewise, the construction of their physical space aims to both foster independence and keep their connection to the natural world. The all-natural building process starts by sourcing trees from the property for timber frame structures with straw-bale walls, earthen plaster floors and mortise and tenon joinery in place of metals such as nails. Two 2,000 gallon cisterns catch rainwater and filter it for drinking and cooking. Low-flush composting toilets are connected to a biodigester, which, along with food scraps, produces methane gas for off-grid cooking. The one building on stick frames has an HVAC requirement, so they utilize solar panels and geothermal and rocket mass heaters.

“How can we say we’re authentically exemplifying our traditional ecological values if we’re perpetuating toxic conventional construction practices and remaining tied to a grid that abuses sacred earth?” Briggs-Cloud says.

As an income-sharing community, all residents carry out a role based on their abilities and expertise in exchange for housing, food and a $400 stipend. “We are living into our values as Maskoke people,” Briggs-Cloud says. “Consumerism is not our way of life and we can’t embody the identity that was given to us by our creator if we are obsessed with material and capital accumulation.”

Currently, about half of the village speaks Maskoke. Newcomers tend to be non-speakers, but as the community’s children grow up as first-language speakers, it will eventually become the primary language. The village contains a “no English zone” for students (there’s a 25-cent fine for speaking English) and a daily Maskoke language hour. They don’t have TV — “too much English,” says Briggs-Cloud, “plus we just don’t have the time.” They do have a daily evening meeting with storytelling that provides cultural teachings and time for everyone to share the activities of the day and what they’re grateful for. Recently, that includes a number of grants and financial gifts that helped them pay off the deed to the land in late April.

Lately, facing the coronavirus pandemic, the self-sustaining, communal structure is paying off. They have a steady supply of food and are more secure in their economic future knowing they’re not dependent on outside groups for electricity, plumbing or even paychecks.

“We don’t need to be making all of these concessions to accommodate the colonial world,” Briggs-Cloud says. “We need to stand our ground and look at what kind of society did our language once function best in. That’s the kind of society that we need to be radically materializing.”