Build Affordable Housing That Can Weather the Next Superstorm – Next City

Build Affordable Housing That Can Weather the Next Superstorm 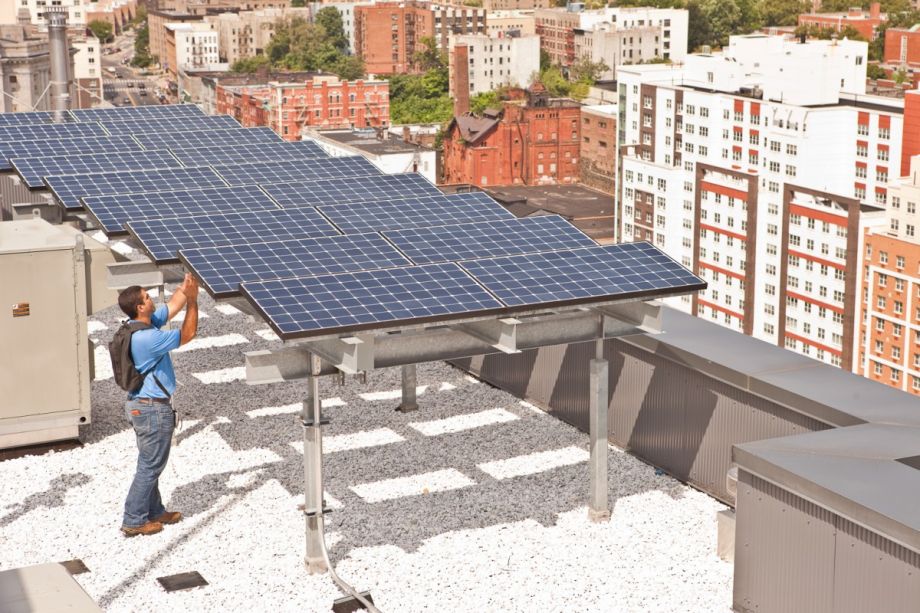 In an era when climate change is expected to increase the odds 14-fold of superstorms that threaten the U.S., low-income seniors, people with physical disabilities and other vulnerable populations are hit hardest by dangerous weather events. During Superstorm Sandy three years ago, many living in public housing along the East Coast were stranded when the electricity went out and backup diesel generators failed. For these residents, left without essential services, working elevators, mobility devices, running water, heating and cooling, medical equipment, and refrigeration for medicine, power outages are a matter of life and death.

Policymakers, housing developers, activists and advocates should accelerate the adoption of resilient power solutions now — before the next disaster strikes. Solar-plus-storage — solar power combined with battery storage systems — is part of the answer. (Solar-plus-storage is basically the technology that allows us to stockpile the sun’s energy in a battery for use on a rainy day.)

New research on the economics of solar-plus-storage systems and affordable housing examines the market in three major U.S. cities, New York City, Washington, D.C. and Chicago. The recently released report, “Resilience for Free,” indicates this emerging technology makes financial sense for building owners and protects vulnerable people in affordable housing during power outages. Developers of low-income housing across the country can use solar-plus-storage to reduce utility costs and generate revenue that would offset the cost of the system’s initial investment. According to “Resilience for Free,” D.C. would have the shortest payback period, a mere 3.5 years. That’s similar to the payback for solar-only systems, and the newer technology delivers more value over 20 years and provides a crucial resiliency benefit that solar-only systems do not.

The bottom line is that there is no longer a financial or technical excuse to leave low-income and vulnerable people at risk in prolonged power outages.

We’ve seen the breakthroughs in clean energy technology from Tesla and SolarCity, but these companies are primarily marketing only to big commercial customers that want to reduce their utility bills. While this is a good way to build the early markets for clean energy and solar-plus-storage systems, vulnerable residents don’t have time to wait for these innovations to trickle down to their communities — not when they are economically feasible today and mean the difference between protection and tragedy.

Governments, businesses and nonprofit must work now to bend the solar-plus-storage trend to serve public needs, such as affordable housing and other essential services in low-income communities. Policymakers should implement more targeted incentive programs for solar-plus-storage development in affordable housing. And developers and building owners should explore installing such systems, knowing they can protect vulnerable populations and receive an economic return. Energy storage and solar companies should aggressively enlarge their marketing to include affordable housing and buildings for seniors and vulnerable populations, as well as all critical public facilities. Targeting only corporate customers shortchanges the technology’s social promise.

Vulnerable populations and their advocates should demand equal access to these new resilient power technologies, while environmentalists should support solar-plus-storage as part of climate change initiatives. And finally, banks, foundations and socially responsible investors must find creative ways to finance these technologies to serve critical public needs.

With the right market structures and incentives, solar-plus-storage systems can change the way America thinks about clean energy. Let’s not surrender the benefits to private companies or wealthy individuals alone. Three years after Sandy, the hardest-hit areas are not only still recovering, they are still at risk. It’s time to make sure that vulnerable people and communities nationwide have access to reliable power when the next disaster strikes.

Lewis Milford is the president of Clean Energy Group, a nonprofit advocacy organization that released “Resilience for Free: How Solar+Storage Could Protect Multifamily Affordable Housing from Power Outages at Little or No Net Cost” on October 14th. It is the first public analysis of the economics of solar+storage systems in multifamily affordable housing developments.