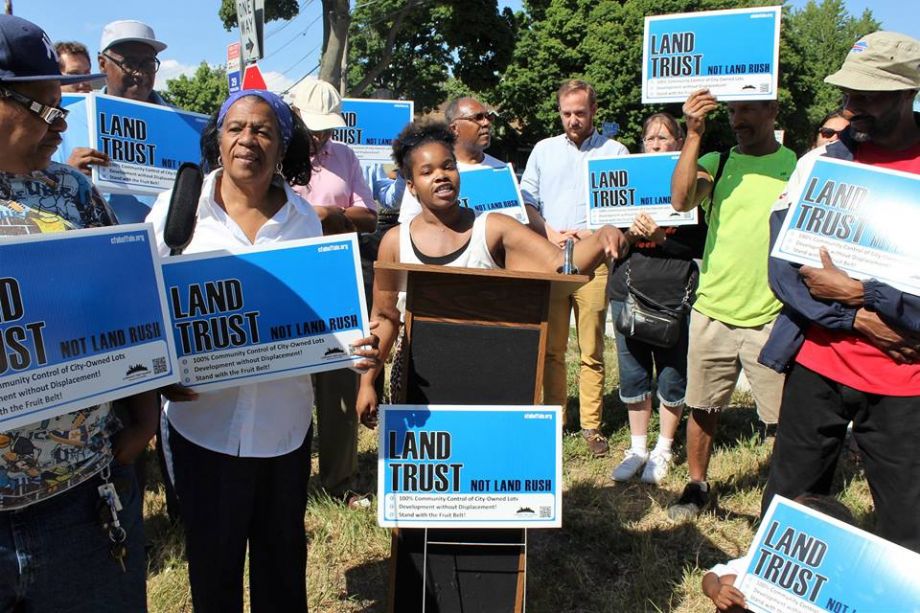 India B. Walton speaks at a rally in support of the Fruit Belt Community Land Trust. (Credit: Community First Alliance)

Buffalo Common Council partially lifted a two-and-a-half-year moratorium on the sale of city-owned property in Buffalo’s historic Fruit Belt community on Tuesday, reported the Buffalo News. The action paves the way for the transfer of up to 20 vacant lots to the F.B. Community Land Trust, as well as the sale of other vacant lots to homeowners living adjacent to the parcels, the Buffalo News reported.

The move was applauded by Fruit Belt community members and city officials, in no small part because it is buttressed by a strategic development plan that gives residents a seat at the table in shaping the neighborhood’s future development.

“I’m very excited,” India Walton, Fruit Belt resident and founding member of the F.B. Community Land Trust, said to the Buffalo News. “We’ve been able to find a way to work in concert with the city so we see development happen, but see it in a way that benefits the people who have been caring for this community for so long.”

As Next City previously reported, Walton’s ad hoc efforts, which included putting up caution tape to protect parking spots for senior citizens, helped push the conversation forward around forming the community land trust, a nonprofit that takes ownership of property within a community on behalf of that community, and leases that land to developers or homeowners on terms that ensure permanent affordability for that community.

“It empowers people to vet development in the community,” said Buffalo Common Council President Darius G. Pridgen, who represents the Fruit Belt neighborhood. “This is one of my crown jewels in my term as councilmember. To save some of the city-owned land in the Fruit Belt for low-income and working class who want to stay, it’s a good day.”

It’s a significant step in a process begun nearly three years ago by East Side Buffalo activists to ensure that gentrification did not leave the neighborhood’s impoverished and legacy residents behind. In the coming weeks, it’s expected that moratoriums on the sale of some 200 more city-owned lots will be lifted as well. Prospective developments, which include both commercial and mixed-income residential projects, will be reviewed by a Fruit Belt Advisory Committee, which will then make recommendations to the city, Pridgen told the News.

The larger goal, Walton and Pridgen told the Buffalo News, goes beyond housing.

“People want retail and services back,” Pridgen said. “They don’t want to have to drive across town for goods and services.”

The historic Fruit Belt neighborhood, so named for the flowering fruit orchards planted there by German immigrants, has struggled since the 1950s, when construction of the Kensington Expressway split the area in half, destabilizing what had been a peaceful district, decreasing property values and driving out long-time residents. In their place, as Next City reported, came a significant population of African-American families, who themselves had been driven out of the downtown area by urban renewal projects. Buffalo’s deindustrialization — and its attendant job loss — in later years saw the Fruit Belt decline even further, with a rise in abandoned properties and poverty levels.

Threatening encroachment by the adjacent and growing Buffalo Niagara Medical Campus kick-started the push to create the Community First Alliance in the fight against displacement. The alliance’s work with the city led to the launch of the F.B. Community Land Trust, giving the residents negotiating power in working with developers.

“If we control the process of who purchases those lots, we will be able to control rents, we will have development without displacement of our residents. That’s what’s key,” Annette Lott, who has lived in the Fruit Belt for more than six decades, told Next City. “We want development, we want businesses, we need businesses in our community, but we don’t want to do it at the expense of dismantling what has been a viable, community spirit that we have built for many many years.”