Buffalo and Its Daily Paper, Two Fates Inter-webbed – Next City 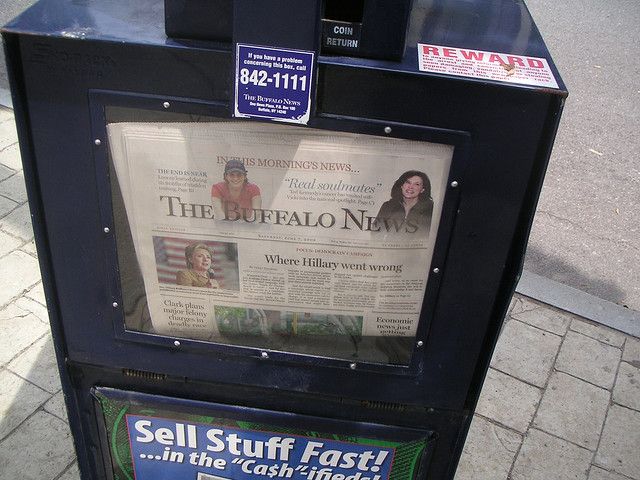 Last Saturday, Arthur Brisbane penned his final column as public editor of the New York Times. In it, he admonished the paper for its imprudence in the digital era.

“As the digital transformation proceeds, the Times should more forcefully communicate its brand values — its high standards, commitment to accountability, etc.,” wrote Brisbane, adding that doing so “secures the anchor in a time of change like this.”

If so, his successor, Margaret Sullivan, marks an auspicious start.

As editor and vice president of the Buffalo News for over a decade, Sullivan was seasoned in the art of grounding a paper during turbulent change — weathering Buffalo’s decline, and channeling momentum from its more recent whiffs of resurgence. The test of her legacy at the News, though, will be the more recent transition foreseen by Brisbane: digitalization.

At the turn of the 20th century, Buffalo’s population swelled to make it the 13th-largest city in America. But just decades after being christened the “City of Light,” it began shedding the legions of manufacturing workers who once powered the local economy. As a blighting inner city eroded the middle class, Buffalo came to be invoked, along with Detroit and Cleveland, as one of America’s quintessential Rust Belt cities — in that it ached from unrealized promise.

Under Sullivan, The Buffalo News was equipped with its first investigative team to delve into Buffalo’s systemic distress. “The most important role of the News in revitalizing the region,” Sullivan told me, was to “cast a bright and unsparing light on its problems, its public officials, its business community and its various governments.”

Nearly one in three Buffalonians live in below the poverty line ($23,000 for a family of four), confirming Buffalo as the third-poorest big city in America. A News investigative series documenting daily lives of the city’s poor residents is perhaps the touchstone of the investigative team’s work.

Part of a five-month investigation, the series exposed the added costs — from predatory loans to illegal fees for check cashing — tied to life in poverty. The poor must contend with a dual affliction, Sullivan explained, “both living below the poverty line and being taken advantage of by unscrupulous business people.” The articles spurred the a deeper look at poverty in Buffalo, and earned the News a Distinguished Community Service Award from the New York News Publishers Association.

Under Sullivan’s tenure, the News has won this same award for eight consecutive years. Coverage ranged from overlooked prescription drug abuse to the crash of Continental Flight 3407, which claimed 50 lives and exposed widespread industry negligence.

Like any daily supporting a struggling community, the paper has had to navigate a thorny path between dispassionate journalism and targeted advocacy. “Sometimes the reporting translates into the advocacy,” said Lee Coppola, a former reporter at the News who went on to serve as dean of the Jandoli School of Journalism and Mass Communication at St. Bonaventure. “Reporting the failures of, for instance, the public school system, advocates for change without advocating in the news pages.”

Despite community reforms that followed in the wake of her paper’s coverage, Sullivan made one thing clear: “Our best role is not as an advocate or a participant; it is a journalistic one — reporting what’s going on, and getting underneath the surface.”

That journalistic role may now be changing. Recent infusions of State funding, along with legislative reforms designed to streamline redevelopment, have primed Buffalo for major revitalization. To maintain its deep ties to the city, the News must contend with a modern era — begat by a digitizing media industry and an urbanizing physical environment.

Whether watching fireworks at a Bisons game or touring independent art exhibits in old grain mills along the waterfront, the sense that Buffalo will recover is palpable. But how others will catch wind of the recovery is another matter. Marren began his first class of the semester by polling his students: Where do they get their news?

“Very few students read the paper or even watch the news on television,” Marren confirmed. “They all get it online.”

Since 2007 alone, 14 metropolitan dailies have closed across the U.S., while nine more have clung by a cyber-thread, subsisting off haphazard online platforms, according to NewspaperDeathWatch.com. Others, such as the New Orleans Times-Picayune, have cut back their circulation to a few days a week — which some argue leaves the window open for nontraditional digital outlets to take the reigns in providing hard-hitting local journalism.

For the local dailies that can cope, and potentially thrive, some degree of online-print hybridization is inevitable. Yet for a paper like the News, tied so intimately to its city, the right mix is hard to envision.

Warren Buffet, whose company Berkshire Hathaway owns the News among more than 60 other daily newspapers, told The New York Times that “newspapers that intensively cover their communities will have a good future,” adding an advisory note to dailies to “make your paper indispensable to anyone who cares about what is going on in your city or town.” Here the News has excelled, as evidenced by a readership that the Times pegged at 70.9 percent of area households, the second-highest in the nation (this in a city where one in three adults have failed literacy tests).

“The public likes the paper and thinks that it serves them well,” Sullivan explained. “They may complain about some aspects of the paper, but they trust it, depend on it, talk about it and buy it.”

Buffalo’s aging population is a likely boon to print readership, something both Sullivan and Coppola acknowledge. (In a recent ‘Ask the Editor’ online chat session, one comment for Sullivan read: “I’m 63, so having a print newspaper is something that I’m used to…and love. Do you think that daily print journalism will survive?”) That the city is poised for redevelopment and an influx of tech-hungry young adults, then, could very well threaten the News’ circulation.

“If the dead-tree editions go the way of linotype machines, journalism and journalistic enterprise is bound to suffer,” Coppola explained. “The key is to blend both, make both available and, at the same time, indispensable.” Prior to her departure, Sullivan initiated changes along these lines: This year, the News will boast a redesigned website and offer digital subscriptions along with respective mobile e-editions.

The changes are part of figuring out the “best way to keep the daily print edition afloat for as long as possible — forever sounds good — while making a determined and fast transition to the digital future,” Sullivan said.