BRT Has Had a Pretty Good Week So Far – Next City

BRT Has Had a Pretty Good Week So Far 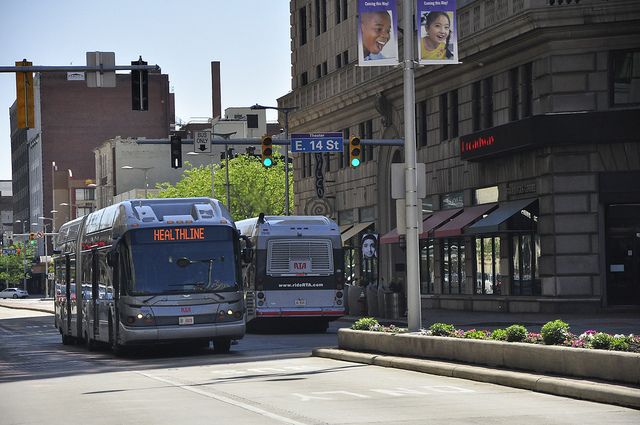 The HealthLine in Cleveland, at present one of the only BRT systems in the U.S. Credit: EMBARQ Brazil

Bus rapid transit, which for more than a decade has enjoyed tremendous popularity in a number of Latin American and Asian cities, has never gotten much play in the U.S. beyond a single 6.8-mile route in Cleveland. It’s a fairly shining example of what BRT can do when done properly, but it pretty much stands alone.

Yet over the last few days, the prospects for future BRT systems in at least two other major U.S. cities have begun to look up.

We can start in Nashville, where transportation officials just learned that their application to secure federal funding for a BRT line has moved forward, the Tennessean reported yesterday. The proposed 7.1-mile system, known locally as The Amp, would connect neighborhoods in East Nashville to those on the city’s west side at an estimated cost of $174 million.

By all appearances, the feds are open to footing a $75 million chunk of that bill. Even though nothing has yet reached final approval, the news comes as a promising sign that The Amp will eventually secure funding under the Federal Transit Administration’s Small Starts program. (The other $100 million is expected to come from the State of Tennessee, the Nashville Area Metropolitan Planning Organization and the Nashville Metropolitan Transit Authority.)

“Being accepted into project development is essentially the FTA saying we’re on the right track with our project and they want to help us get to a point where it can be recommended for federal funding,” Nashville Mayor Karl Dean said in a statement.

What’s more, The Amp doesn’t look like it will slouch on the features that make bus rapid transit, well, rapid. It will have dedicated lanes, signal prioritization and level boarding. Not bad for a city that one local blogger once called the “sprawliest sprawler.” See the video below for a primer on Music City’s first potential BRT line.

Meanwhile, BRT represents some of the only news to come out of Detroit of late that isn’t about bankruptcy or elections. John Hertel, CEO of the newly created Regional Transit Authority (Metro Detroit’s first!), yesterday threw his support behind BRT, plans for which have been gestating and stalling for years. And he sounds pretty darn excited about it.

“These vehicles look like rocket ships,” Hertel, who has led the RTA since told local radio station WDET. “You can’t see the tires. They run in dedicated lanes. They run at the same speed as light rail. They control the signals so they don’t have to stop for red lights.”

Bill Bradley has explained why the RTA’s creation could mean Southeast Michigan might finally get the ball rolling on a 40-years-in-the-making light rail connection between Detroit and Ann Arbor. Hertel’s zeal for BRT in Detroit — which would not only serve the city, but also span some 80-plus miles across four counties in the metro area — also bodes well for other modes of public transit in and around Motor City.

“What you would have is 110 miles of a modern system running in all four counties and finally running people back and forth to [Detroit Metro] Airport,” Hertel said. “It would change everybody’s attitude and reality about what mass transit can do for them.” (Note: As Yonah Freemark pointed out in 2011, Detroit’s BRT system may only span about 83 miles despite local politicians sticking with the “110” number.) 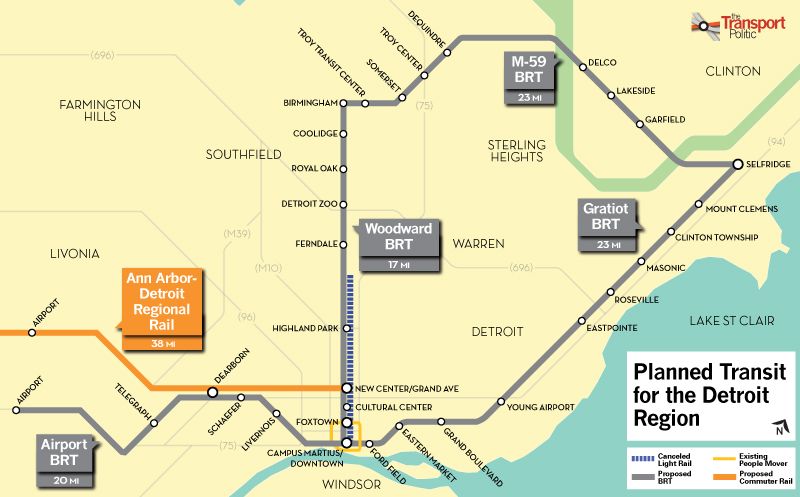 Over at The Atlantic Cities, Eric Jaffe had a piece this month in which he called for transportation advocates to better manage their expectations. In an age when planners are speculating on everything from floating pods to Hyperloops to bicycle highways, he argued, we run the risk of ignoring viable, concrete solutions for moving people around with greater efficiency.

“For all our occasional frenzy over futuristic transport modes, the real future of transportation may be the bus,” Jaffe wrote.

So until we actually see Elon Musk’s passenger-carrying pods running along “air bearings” on the California coast, maybe cities can set their sights on dedicated lanes and level station platforms.