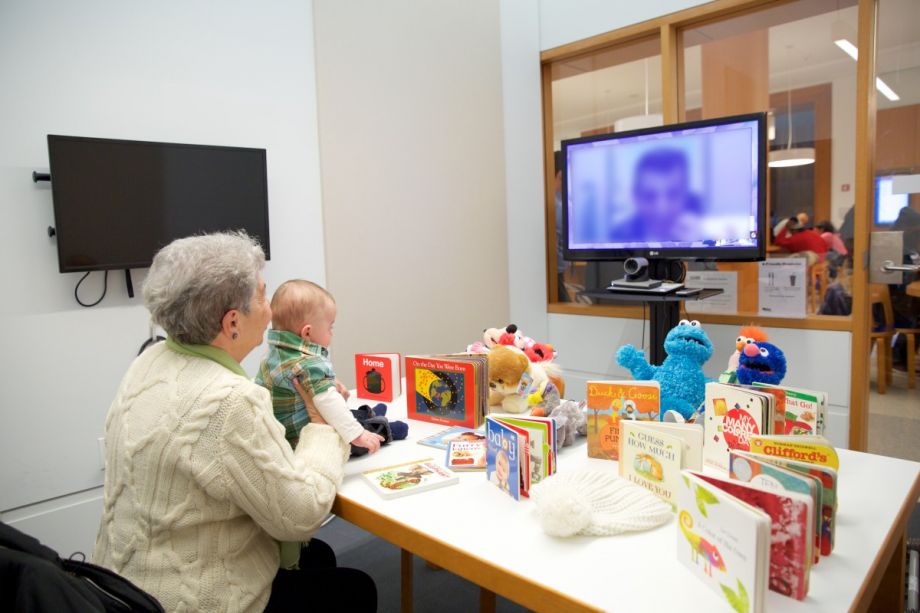 A family uses the Brooklyn Public Library's telestory program to video conference with an incarcerated loved one. (Photo by Gregg Richards/BPL)

Eleven months had passed since Rebecca Sanchez’s two children, both younger than 3, had last seen their father, who was incarcerated at Rikers Island. The family is banned for a year from in-person visitations, but last month, in a conference room filled with toys and books, they were together again. The children sang their father nursery rhymes. He watched them color. They read a book together: I Love You Daddy. They just couldn’t touch — because Sanchez and her children were in a branch of the Brooklyn Public Library, and their father was appearing via video conferencing from the prison, 12 miles away. Still Sanchez says the visit “felt kind of normal, compared to going to a Rikers visit. … I would never have thought that the public library would do stuff like that.”

The family is one of about 160 that has participated in Brooklyn Public Library’s Telestory program, which allows children to read and visit with an incarcerated parent via video conferencing. Two years after the program’s launch, four BPL branches offer the service, and it’s about to expand. This summer BPL received nearly $400,000 from the Knight Foundation to offer the service in 12 branches total, including ones in Brownsville and East New York.

BPL was one of 14 recipients in the foundation’s libraries challenge, which asked, “How might libraries serve 21st-century information needs?” Nick Higgins, director of BPL’s outreach services, says video visitation might seem out of step with traditional library offerings, but in reality it’s just one facet of BPL’s commitment to democratizing access for all Brooklynites.

“As simply as I can put it, it’s just reading books between family members, it’s providing the opportunity for a kid to read a book with his dad,” he says. “If there’s a shelter or a jail, they’re populations that are sort of out of sight, out mind. They’re severely marginalized and they’re put in facilities that no one really has access to. If we can do something to help bridge them back into the community in a very public, very welcoming way, I think that we’re doing what we should be doing. If the core mission of the libraries is to be as accessible and inclusive as possible of all our diverse communities, I think it’s right in line with our mission.”

The Telestory program allows four or five families a week to conference with their loved ones for about an hour, free of charge. Families gather in a room at the library stocked with toys and books; the incarcerated parent has the same set of books in a room at the prison. Higgins says the library also encourages people to continue to visit in person, which he says distinguishes Telestory from other video visitation services that are proliferating across the country. As more jails and prisons implement video conferencing — over 600 so far — many sign exclusive contracts with telecommunications companies like Securus Technologies that obligate the correctional facilities to do away with in-person visits all together. Families are left with no option but those video services, which are often not free and can cost up to $20 for 20 minutes.

In these cases, the incentive is clear: profit, for both the prisons — which receive a cut of the proceeds — and the telecom companies. Suits have been filed in several states to guarantee prisoners the right to in-person visits, some arguing that it’s inhumane to deny them, others that the exclusive video visitation policies violate antitrust laws by requiring people to incur otherwise avoidable costs. Bills have already passed or are underway in Texas and California to restore in-person visitation or prevent correctional facilities from removing it, but Higgins says the practice of video visitation isn’t going away. “This is an opportunity for us to just show people how it should be done,” he says of Telestory. “I think that the public library, at least Brooklyn Public Library, is positioned to really create a best practice for this.”

Telestory isn’t BPL’s first program to work with Brooklyn’s incarcerated, or their children. Library staff run a sci-fi book club for young men and trade books with inmates at Rikers every week. BPL also runs an early literacy program for incarcerated parents at Rikers called Daddy and Me. In a four-week class, parents are taught how their young children are learning to read and write, how they construct narratives and develop a vocabulary and sense of rhyme. Parents then practice picking out and reading age-appropriate books, and record themselves reading to their kids. On the last day, families come for a visit, where children receive those audio recordings, plus books and their own library cards.

“We’re trying to help those children understand the importance of reading but also to help maintain a connection between the parents and children and doing it through literacy skills,” says BPL President and CEO Linda Johnson. “All of this really is about trying to deliver on that message of being there for every New Yorker and being accessible,” she says. For BPL that mission manifests as a broad range of programs, from children’s books in family homeless shelters, to technical books for Spanish-speaking day laborers at the Worker’s Justice Project, to legal services for recent immigrants seeking citizenship. Over 8 million visitors utilize the library every year; 1 million Brooklyn residents hold library cards in a borough of 2.6 million people. Despite doomsday predictions about the death of libraries, Johnson says BPL’s role has only changed in the digital age.

“Once it was books, now it’s technology, and who knows what it will be in 20 years,” she says. “But the affluent will have it at home first, the underprivileged won’t, and we’ll be there to level the playing field.”