The Recession Was Anti-Sprawl, Brookings Report Finds – Next City 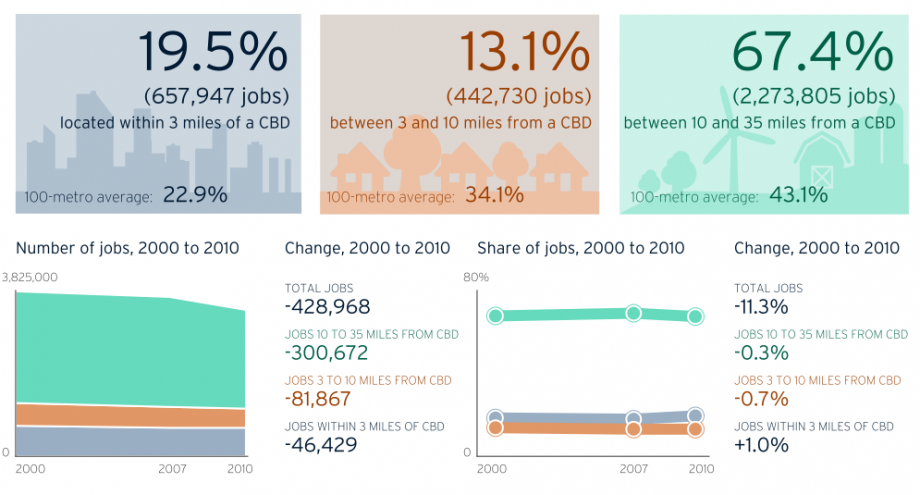 Job data for the Chicago metropolitan area between 2000 and 2010. Credit: Brookings Institution

Good if not altogether surprising news for anti-sprawl advocates: Central business districts weathered the recession better than their suburban counterparts, according to a report released Thursday by the Brookings Metropolitan Policy Program, and the economic downturn actually helped stall the outward migration of jobs from downtown areas.

The report looks at the number of jobs within three, 10 and 35 miles of central business districts, first from the period between the years 2000 and 2007 (before the recession hit) and again between 2007 and 2010. Of the 100 largest metro areas analyzed, only seven saw an increase in the share of jobs within three miles of the downtown area during the past decade.

All but three of the largest 100 metros lost jobs during the recession, which affected outer-ring jobs (10-35 miles outside the business district) the most. Many of the these are in decentralized fields like construction, manufacturing and retail, accounting for 60 percent of recession-related job losses far from downtowns.

Jobs within the inner ring (within three miles of the business district) had a modest spike following the recession, thanks the growing fields of health care and education, which tend to be very centralized. Also, downtowns lost jobs at a slower rate than suburban areas.

Detroit leads the nation in job sprawl, with over 77 percent of its jobs located 10-35 miles from its downtown. San Jose is the most centralized metro area, with 64 percent of jobs located within three miles of its central business districts.

Before the recession, both jobs and people were moving to outer-ring areas. The report shows that the share jobs within 10 to 35 miles of metropolitan downtown areas increased by nearly 10 percent between 2000 to 2007. But from 2007 to 2010, the outer-ring areas experienced the highest level of job loss.

Not only did the recession stall the movement of jobs from downtown to the suburbs, but during that same time period the largest metro areas experienced notable population increases within their central business districts. According to 2010 Census data, the outer suburbs either saw less growth or no growth in population as compared to the inner suburbs and downtown areas.