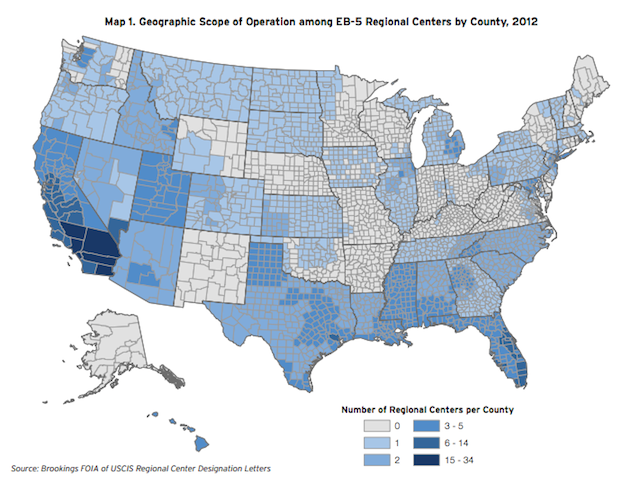 The federal EB-5 visa program gives immigrants a chance to secure a green card by investing at least $500,000 in an American business and creating at least 10 jobs. In return, it brings capital to parts of the country where private money has dried up. In the years since the recession, EB-5 has exploded on the backs of a great deal of interest from well-heeled investors in developing countries.

According to a new report from the Brookings Institution, however, the increased interest has exposed some issues with the system.

The majority of EB-5 visas are granted through what is called the regional center program, implemented as a result of low participation in the original EB-5 Targeted Employment Area program. Basically, an immigrant investor applies to a regional center, which is a public or private entity that will serve as an intermediary. The program started in 1993 and saw modest growth in its first 15 years, with 16 regional centers across the country by 2007.

But in the years since the economy crashed, regional centers have grown at a meteoric rate. In 2008 the number nearly doubled before it hit 74 in 2009. As of the end of last year, the country had approximately 400 regional centers. 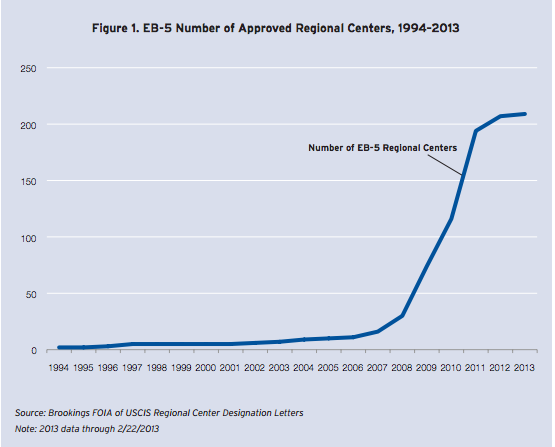 With the influx of eager investors comes growing pains. The immigrant investors deal with a byzantine network of intermediaries at the regional centers. There is little, if any, regulatory oversight. Most worrisome of all, there is a lack of dialogue between the regional centers and local economic development agencies (EDAs).

The regional centers and immigrant investors need each other. The centers can’t exist without the investor’s interest, and the investor relies on the center to invest their capital in the local economy. But regional centers sometimes charge fees in addition to the required investment for their “services,” which the government does not regulate.

The program isn’t without corruption, either. Last February, the Securities and Exchange Commission filed a lawsuit against a Chicago regional center for trying to defraud more than 250 investors who had put up over $150 million. Twenty-seven investors sued a New Orleans regional center for abusing funds intended to build restaurants and hotels.

Corruption is nothing to take lightly, though here it seems like a confined problem. It’s the lack of coordination between EDAs and regional centers that can really doom programs from the outset. Though EB-5 is a federal program, the majority of economic development happens at a hyper-local level. “There are no criteria in the federal program that promote coordination between regional centers and existing state and regional economic development efforts,” the Brookings Institution writes. “The EB-5 program could have more of an impact if both entities worked more closely with each other.”

EB-5 should be a well-oiled machine, and there’s no denying that the program has acted as a catalyst for regional economic development across the country. Until the government implements stronger regulations and gets local EDAs in on the picture, though, it won’t meet its central goal of fostering development and creating jobs.