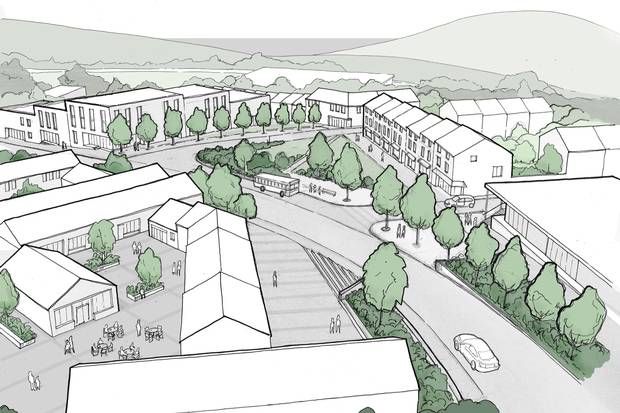 A rendering of the town proposed by Damien Hirst.

If you’re eager to live in a town built by the guy who soaked a shark in formaldehyde and erected a statue of a spliced-open pregnant woman, your dreams just got one step closer to reality.

U.K. shock-artist Damien Hirst floated plans last year to build an entire village from scratch on the British coast. Now those plans are about to come to fruition. As Feargus O’Sullivan reported in December for Next City:

Hirst plans to build a 187-acre, 750-home settlement near his own home outside the coastal town of Ilfracombe, a project that locals are already dubbing “Hirst-on-Sea.” His chosen collaborators, Architects Rundell Associates, have so far kept silent on the specifics – all that’s publicly known comes from some very vague renderings and a comment reported from a public meeting that Hirst “has a horror of building anonymous, lifeless buildings.” Still, with Hirst’s great wealth and his taste for grand guignol effects, one thing’s for sure: the resulting townscape, whatever it looks like, will generate buzz.

Generating buzz, it is. Outline plans for the project were approved by the North Devon Council this week. The village will officially be known by the surprisingly prosaic name Southern Extension, and will include shops, a primary school, a sports pitch and woodlands. According to the North Devon Journal, “there was fierce debate among councilors and members of the public over the effect the development would have on Ilfracombe.”

The project will include 75 affordable homes, and will be built over the next 10 to 15 years. Renderings show an extremely typical suburban town filled with identical houses and strolling pedestrians. Given Hirst’s history, it’s hard to imagine he’s not trying to make some sort of statement. We just may have to wait until it’s complete to figure out exactly what that statement is.