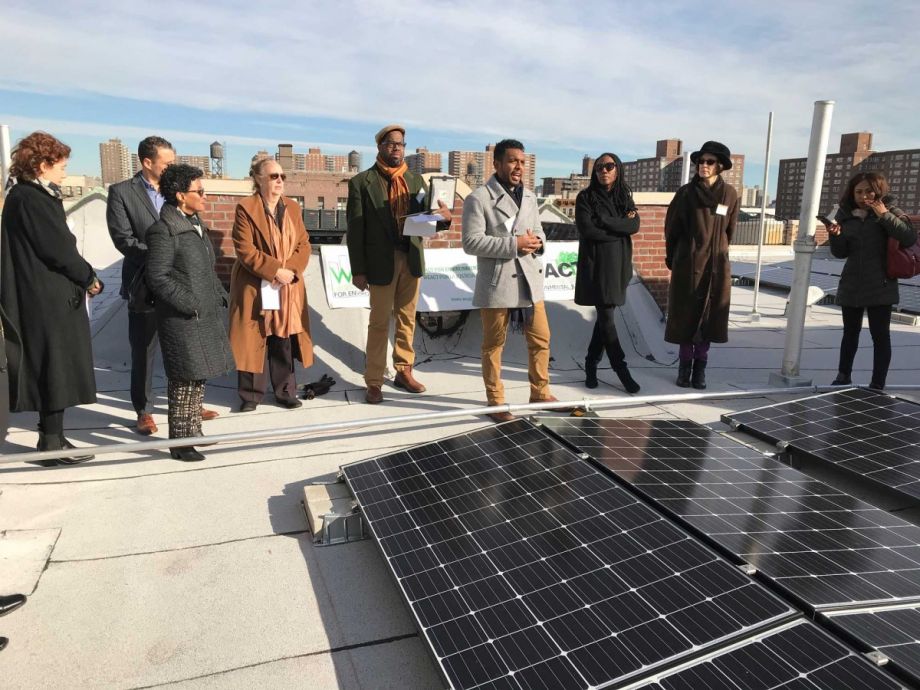 Installing solar in multifamily buildings in New York City is a unique challenge, but Solar One, WE ACT, and more groups in New York are working to lower energy costs for low-income residents while increasing sustainability. (Photo courtesy Solar One)

When New York City passed the Climate Mobilization Act last June, laying out strict requirements for the biggest buildings in town to curtail their carbon emissions, the city council included exemptions for certain public properties and affordable-housing complexes. But some affordable co-ops have been finding ways to reduce emissions anyway, and save money for residents in the process.

WE ACT for Environmental Justice, a nonprofit advocacy group based in northern Manhattan, announced an initiative in 2016 called Solar Uptown Now, a group-purchasing program for solar panels targeted at affordable-housing co-ops in New York. The program was a partnership with Solar One, a nonprofit that provides technical assistance for solar projects, and the Urban Homesteading Assistance Board (UHAB), which works with a unique set of limited-equity co-ops in New York City called Housing Development Fund Corporations, or HDFCs. The program has so far trained 118 northern Manhattan residents in solar installations, and added solar panels to 13 buildings in the area, says Cecil Corbin-Mark, deputy director of WE ACT for Environmental Justice. By tying together the goals of carbon reduction, affordable-housing preservation, and job training, Corbin-Mark says, the program creates “a platform from which northern Manhattan can spring into greater energy independence and energy democracy.” And lessons learned from the program are helping some of the partners bring solar energy to other co-ops across New York.

HDFCs are buildings that were abandoned by their former landlords during the financial crises of the 1970s and turned over to residents under a provision of the state Private Housing Finance Law, with certain restrictions on resident income and maximum sales prices. They tend to be in neighborhoods with “really high environmental burdens” such as air pollution and urban heat-island impacts, says Clara Weinstein of UHAB. Many HDFCs were neglected by their previous landlords, and so they “aren’t always in the greatest physical shape,” Weinstein says. Plus, the fact that residents’ incomes are limited makes it extra challenging to carry out big building renovations.

“We knew that solar was a technology that could be saving people a lot of money and helping people in affordable housing, but there was a lot to figure out in terms of how to make it work for our community,” Weinstein says.

Solar Uptown Now was UHAB’s first big foray into solar, and UHAB’s credibility with the resident-owners of HDFC buildings was a key to moving the project forward. Co-ops often have high energy costs, particularly in common spaces like hallways, laundry rooms, boiler rooms, and elevators. The 13 buildings participating in Solar Uptown Now could save nearly $2 million in energy costs over the 25-year life of the panels, according to one estimate. UHAB has since launched Co-ops Go Solar, an initiative to bring solar energy to as many HDFC buildings as it can, as Next City reported in 2018. There are around 1,300 HDFCs in the city, Weinstein says. About half are UHAB members, and the group has so far signed up 22 buildings all around the city for solar purchasing, and started talks with around 330 more co-ops about the solar possibilities. Solar Uptown Now was an important proof of concept, Weinstein says.

“Having other role models in the community makes a huge difference,” she says.

“Solar for single-family homes is very straightforward — you could do it in a day if you wanted to,” says Anika Wistar-Jones, the affordable solar program manager at Solar One. Installing solar in New York is more complicated, and installing solar in multifamily buildings in the city is more complicated still, she says. “And solar for multifamily affordable housing in New York City is the most complicated, and that’s why we do what we do.”

Solar One is also a partner with the New York City Housing Authority on a series of community shared solar programs in Brooklyn and Manhattan. The programs involve installing solar panels on NYCHA buildings’ rooftops, and allowing low-income residents of the surrounding neighborhoods to sign up for the energy they provide, in an effort to reduce housing costs and help community members remain in place. Some NYCHA residents will see savings too, but only about 6 percent of NYCHA households pay their own utilities, says Ellen Zielinski, director of capital projects for energy and sustainability at NYCHA. The shared community solar projects that NYCHA is carrying out with partners around the city are focused on expanding solar energy in the city generally.

No solar installations have been completed at NYCHA buildings yet, but rooftop leases have been signed at a number of buildings. NYCHA has a goal of producing 25 megawatts of solar energy through the program by 2025, and it’s on track to produce half of that amount with projects that are already in the pipeline.

WE ACT is also a partner on one of the shared community solar projects with NYCHA, at Carver Houses in Manhattan. And the group is working on an offshoot of the initial project called Solar Uptown Now Services, which involves working with a small subset of the 118 solar trainees on creating a worker-training cooperative. Efforts are already afoot to diversify the green economy as it relates to housing in New York, as Next City reported last year. WE ACT’s new program is meant to help workers not just find jobs, but to own their own training and installation businesses. Corbin-Mark says the group has had conversations with Congresswoman Alexandria Ocasio-Cortez’s office about the solar training models it’s experimenting with, as an inspiration for the Green New Deal for Public Housing legislation that she announced last year.

“All of this is our version of what a Green New Deal looks like in operation,” Corbin-Mark says.