Bringing Solar Power to Affordable Housing in Brooklyn – Next City 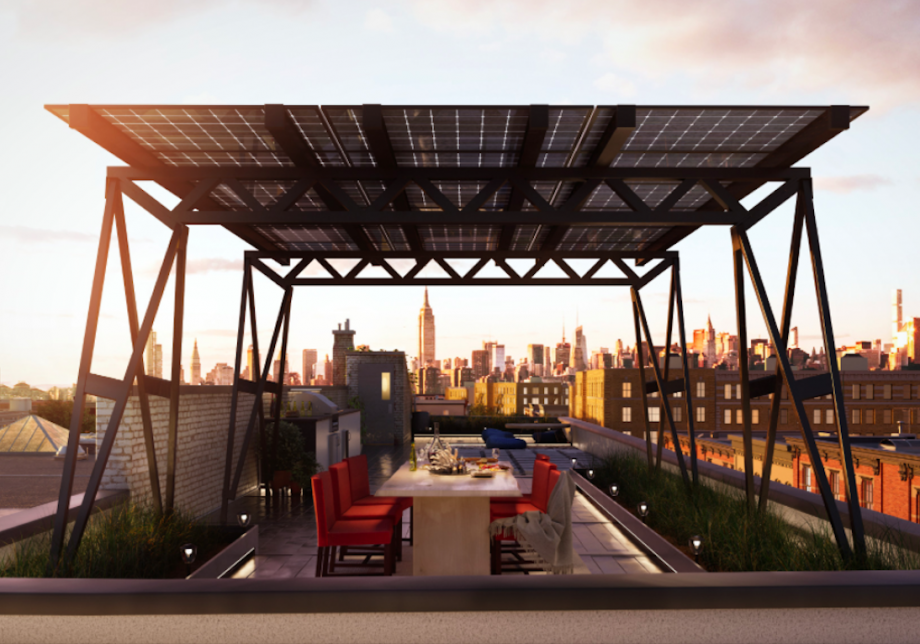 Three years ago, TR Ludwig and Gaelen McKee founded Brooklyn SolarWorks in Brooklyn, New York, and were soon making frequent trips out of the city — to surrounding suburbs, upstate, and New Jersey — to install solar panels on homes.

“We all lived in Brooklyn and when you drive through Brooklyn, you just don’t see much solar,” says Ludwig. “We asked, ‘why aren’t we focused on getting solar here?’”

They found a number of hurdles that have kept solar installation from flourishing in New York City. But the past year has brought promising changes, as well as a new initiative spearheading Brooklyn’s first large-scale solar project for privately-owned affordable housing.

Fifth Avenue Committee, a nonprofit providing affordable housing in Brooklyn since 1978, has enlisted Brooklyn SolarWorks and Gowanus Grid & Electric, LLC to introduce a model for bringing solar power to New York’s privately-owned low- and moderate-income housing stock. The group was inspired by the community solar model, in which open spaces and industrial rooftops are utilized to develop large community solar projects to which anyone can “subscribe”, reducing their electricity bills. In one common setup, subscribers receive a credit on their electric bills for a share of the energy produced by a shared solar installation and sent back into the grid.

Despite the promise of the model, there have been major barriers in bringing solar to New York City, especially to benefit multi-family housing, says Noah Ginsburg, director of Here Comes Solar, a program that looks to spur the adoption of solar within New York’s underserved markets.

Off the bat, Ginsburg says, “we have complicated building stock.” New York’s multifamily buildings are mostly topped by flat roofs, meaning extra complications and regulations solar installations to comply with NYC fire code. The upfront cost is another barrier. Co-ops with low cash reserves are often hesitant to take out a loan to fund an installation, he points out. Finally, New York City renters can not take advantage of federal and state incentives offered to homeowners.

“Issues of environmental justice are always top-of-mind for us,” de la Uz says.

As for Kilgore, he founded Gowanus Grid & Electric “specifically… to make multi-family solar work for families who can’t pay for solar with tax credits and upfront payments,” he says via email.

Fifth Avenue Committee and Gowanus Grid & Electric received grants last year from Citi Foundation and the U.S. Department of Energy to explore solar capabilities for smaller multifamily buildings. “We needed to figure out if it was feasible and cost effective for us to put solar on relatively small roofs,” de la Uz says. “We realized it can be done.”

Their work resulted in a request for proposals seeking a company for building and installation. One of the applicants was Brooklyn SolarWorks. The company developed a solar canopy specifically for the flat rooftops of New York City, meeting all fire code requirements. This innovation, plus a commitment to hiring and training local workforce, made their proposal a clear winner, according to de la Uz.

Solar installation wasn’t feasible on all 45 roofs within Fifth Avenue Committee’s portfolio. Instead, the team will install solar panels on 21 buildings — four of which are newly constructed — in the Brooklyn neighborhoods of Park Slope, Gowanus and Prospect Heights, and Jamaica, Queens. Brooklyn SolarWorks will design canopies for some of the existing buildings, the four new developments, and also the nonprofit’s headquarters in Gowanus.

Financing for installation is not set in stone, according to de la Uz. “Our goal is to finance this with new and evolving programs coming about for solar on multi-family properties,” she says.

Once financing is in place and installation complete, Fifth Avenue Committee expects solar power to initially cover 20 to 30 percent of costs powering common areas of the buildings. “The hope is to go 100 percent,” de la Uz says. “As costs go down and new financing opportunities emerge, we can hopefully expand solar to additional roofs.”

Fifth Avenue Committee also started collecting utility bills from its tenants to better understand their energy usage. A later goal of the program, based off the community solar concept, is for the nonprofit to share its cost savings with tenants and engage residents on broader renewable energy efforts. Cost sharing, de la Uz says, is “the next level of feasibility we need to do.”

She’s hopeful for new solar possibilities emerging in New York, noting that the city’s public housing provider, NYCHA, set a goal to install 25 megawatts of solar capacity on its properties by 2025. That includes work already started at a massive public housing complex in the Rockaways. The agency is expected to release a request for proposals for system-wide installation soon.

“It’s moving from the realm of idea to reality,” de la Uz says. “It’s all happening in real time.”