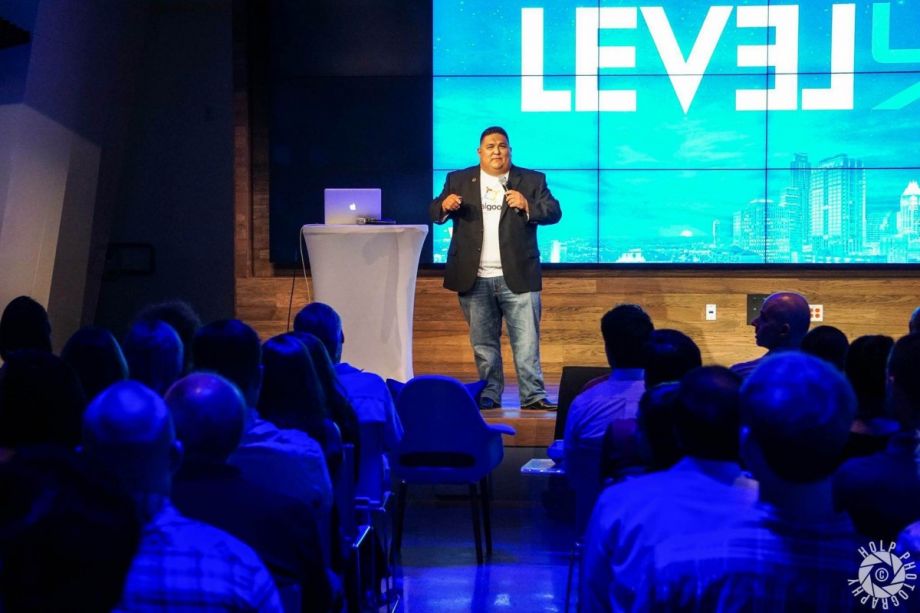 Rúben Cantú speaks at the SocialGood.us and LevelUp Institute kick-off event in Austin.

Rúben Cantú can trace his entrepreneurial spirit all the way back to early childhood. He remembers selling snow cones on the street in Austin, Texas when he was eight years old to make enough money to buy clothes for school.

But after brief stints working for Sony, Apple and MTV, Cantú, who was the first person from his Mexican-American family to go to college, realized that profit wasn’t the gauge he wanted to use to measure his success.

“I realized how it didn’t matter how hard the work was — the work would never stop coming,” he says. Then and there, Cantú decided to leverage his achievements to help low-income communities like the one he came from in Austin, which has the highest density of neighborhoods segregated by education, income and occupation throughout the U.S. It was just a matter of finding a way to wed the nonprofit ethos of the philanthropic sector with the for-profit resources of the Apples of the world.

Cantú is currently testing out a new social enterprise platform to bring this business model to a national scale. He’s taking his Austin-based work with +SocialGood, an international and virtual hub that puts social innovators from around the world in touch with each other, and turning it into a national portal called SocialGood.us.

For his first act: backing venture ideas from sharp first-generation college students who’ve come from immigrant, low-income families, and giving them the same type of support that Cantú got from his local community and professors at the University of Texas at Austin when he set off to navigate the entrepreneurial world as a minority.

That’s the goal of the LevelUp Institute, a tech incubator Cantú founded with another Austin entrepreneur and former Apple employee, Koy McDermott. The incubator just finished up its first four-month program and is now taking applications for its spring 2017 program.

With LevelUp, Cantú hopes to encourage the next crop of B Corporation-type tech companies. B Corps are traditional for-profit enterprises, but have to meet a series of social, environmental and transparency requirements as laid out by the international nonprofit B Lab.

One such group is the team of college-aged Latinos behind YOUnite.io, a one-stop-online-shop for foreign-born youth in the U.S. to learn about the Deferred Action for Childhood Arrival act, or DACA. The law was created in 2012 to let undocumented immigrants who arrived in the U.S. before they turned 16 qualify for a two-year work permit and Social Security number, pending a few other qualifications. While its expansion was halted this year in a Supreme Court ruling, the United States Citizenship and Immigration Services (USCIS) is still taking applications and granting renewals for DACA. Four of the six YOUnite.io founders are DACA permit holders.

But while DACA promises a lifeline for tens of thousands more young undocumented people, “delays[,] confusion over the renewals process, [and a] lack of outreach and information,” limit its reach, according to a policy brief published by the Migration Institute Policy, a think tank, in 2015. With first-hand understanding of that challenge as fuel for their fire and the support of LevelUp behind them, the YOUnite.io team got working to build what will soon become a platform to help support applicants as they move through the cumbersome process.

“They came in not knowing anything about entrepreneurship, and through the process we taught them about turning problems into opportunities,” says Cantú, describing how the group benefited from the first LevelUp incubator. “They went to work and collectively came up with this idea that will help solve the issue for [hundreds of thousands] of people.”

With a new cohort on the horizon, Cantú will be combing through applications over the coming months to try and find what he believes will be the next great B corporation created by first-generation college students. His big plan for SocialGood.us, which hasn’t rolled out quite yet, is to start courting ideas from across the country that tackle the 17 Sustainable Development Goals adopted by the UN in 2015. Right now, there are only over 1,600 B Corp companies up and running across the world, but Cantú’s work could help raise that number — and just as importantly, bring underrepresented groups into the fold.