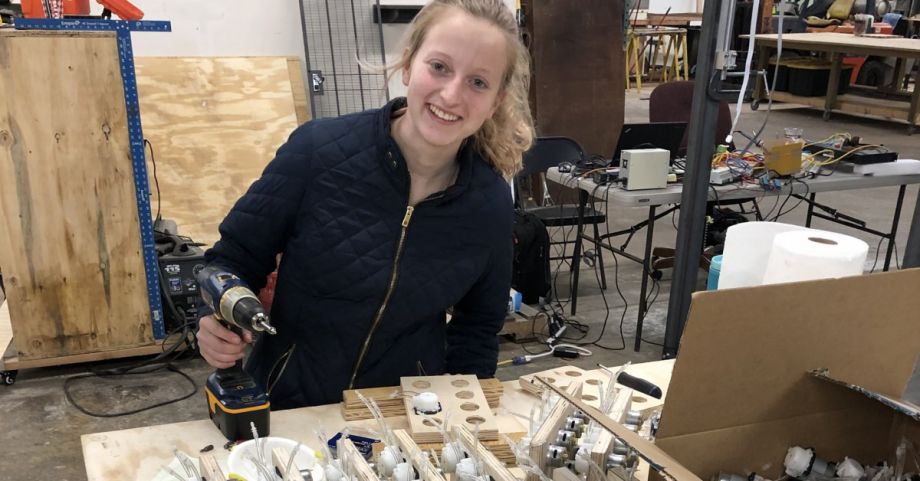 On April 13, in the middle of a pandemic, a storm with wind gusts up to 75 mph ravaged the Hampton Roads coastal region of Virginia. From downed trees to lost power, damage abounded. As sea levels rise, storm surges are slated to get worse.

The RISE Resilience Innovations accelerator in Norfolk is dedicated to ensuring that the region is prepared for a resilient future.

In 2016, the Commonwealth of Virginia was one of 13 states and cities that received grant funding from HUD’s National Disaster Resilience Competition to battle sea level rise along its Hampton Roads region. Since 1930, the sea level has risen by 14 inches in the area, worsening tidal flooding and increasing storm flooding and surges. “This increased risk is already being realized in communities across Virginia’s coast,” the HUD award summary reads. “Seven of the region’s 10 most severe storms, including Hurricane Irene, have occurred in the past 13 years.”

Part of that money was used to realize an idea that Katerina Oskarsson, then working in Norfolk’s resilience office, had been dreaming up with co-workers and collaborators for some time: a coastal resilience laboratory and accelerator. Once funding came through, Oskarsson left her work with the city to launch the accelerator as its own non-profit. Today, that resilience accelerator has a name, RISE Resilience Innovations, which recently announced the second round of winners (the first was in 2018) of its Coastal Community Resilience Challenge.

Today, Oskarsson serves as RISE’s chief strategy officer. “The idea was that, of course climate change and sea level rise is going to be an increasingly big and expensive issue here,” Oskarsson says of the region that is home to the largest naval base in the world. “We figure that a lot of Hampton Road communities will be spending a lot of money to adapt to sea level rise and flooding.” While infrastructure projects can help mitigate the impacts of sea level rise, not all cities, especially smaller ones, can afford large-scale solutions nor can they wait for the time it takes for them to be completed.

That’s why RISE is focusing on accelerating small businesses that offer less expensive solutions that can be tested and implemented in the Hampton Roads region through its Coastal Community Resilience Challenge.The 2020 cohort is composed of five companies from across the country with piloted products ready to be scaled up.

Natrx, one of the 2020 cohort of winners, uses specialized 3D printers to craft custom “exo-structures” from materials like biopolymers, natural material that is either produced organically by living organisms or synthetically from renewable resources. Natrx produces these structures in conjunction with local ecologists and engineers and installs them along waterfronts to preserve infrastructure by mitigating erosion while also providing a habitat for natural growth.

“The void spaces are just as important as the physical spaces,” Leonard Nelson, a Natrx co-founder, says. “In a situation where there are certain species like sea turtles who need to [lay eggs] on land, if you put up a seawall, you’ve blocked their ability to thrive.”

Natrx was founded at the end of 2018, making the company an ideal candidate for RISE’s program. “We’re at the state where we ramped up our progress. We have a viable business and what we want to do is scale it up to produce at the point of need,” Nelson says. Natrx will be using its RISE funding to fabricate their first mobile production unit, a 3-D printer that can travel to project locations and print structures where they’ll be used. In addition to eliminating the costs and hassles of shipping, this process will ideally lead to job opportunities for local contractors as well.

The other four members of the 2020 RISE cohort include Re:Public, which helps non-mapping professionals track real-time flood risks; StormSensor, which builds stormwater monitoring products; Virginia PACE Authority, which offers a financing solution to provide capital related to flood mitigation and other resilience improvements; and WeatherCheck, which uses AI to monitor properties for weather-related damage and loss in order to both speed up the claims process and improve the future of risk analysis.

RISE doesn’t look to fund ideas. Rather it helps bring solutions that have already been piloted to a wider market by providing revenue-based funding, business mentorship, and access to data, experts, and demo sites along the Hampton Roads coast.

“We’re not an incubator, we’re an economic development organization. We broker the problems and solutions with funding,” RISE executive director Paul Robinson says. “What we’ve been building here is a way to identify resilience problems and see if there is a market for [solutions] here and elsewhere. We pick [challenge winners] based on economic viability.” With RISE funding, companies only repay their loans when they begin to see revenue. (The 2018 cohort was actually only announced in spring 2019, so those companies are still working on scaling up, as well.)

A benefit of locating the accelerator in Norfolk and infusing the region with companies testing and growing their resilience-based products is economic diversification for the city. While RISE doesn’t require winners to permanently relocate their business to Hampton Roads, during “normal times” the teams naturally spend quite a bit of time at RISE’s co-working and workshop space, with some choosing to relocate to or open new space in the region. That’s good for the city’s economic base, Robinson says.

“Historically we’ve been really reliant on government dollars from the DOD,” Robinson says. “We need to grow and diversify the economy. Why not, instead of putting money into walls or storm drains, we put some towards developing intellectual capital and innovation around resilient coastal communities?”

In thinking about the future, Robinson says that RISE’s goals are to keep sourcing solutions to big problems and adding another five companies to the accelerator this summer through their Urban Mobility Challenge that focuses on apps that offer real-time flooding solutions.

“We want [Hampton Roads] to be a community that people want to belong to,” he says, “where innovation and resilience happens and starts to grow organically.”