In Memphis, Youth Who Have Moved Through the School-to-Prison Pipeline Are Helping to Change It – Next City

In Memphis, Youth Who Have Moved Through the School-to-Prison Pipeline Are Helping to Change It 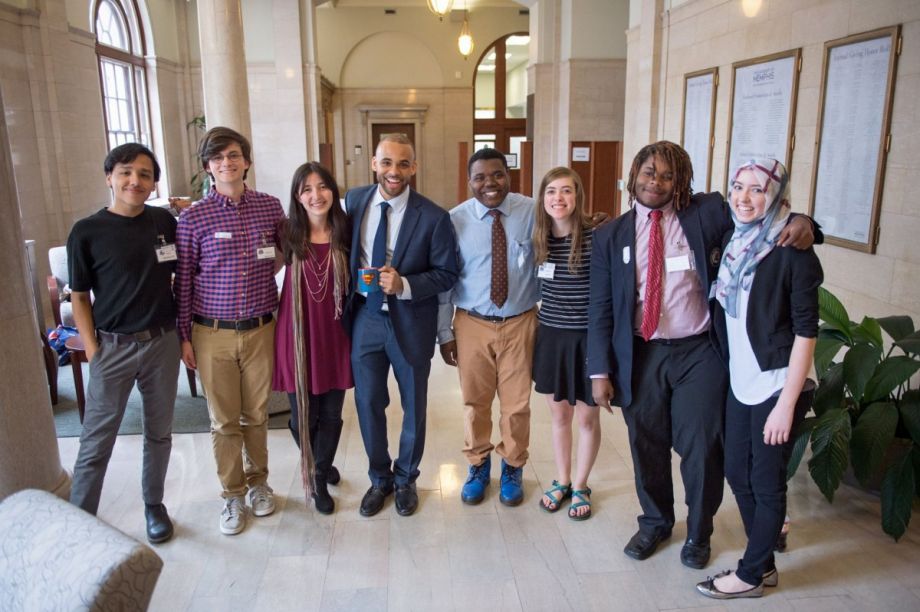 For almost six months, Mahal Burr and Evan John Ross Morrison, employees of the nonprofit BRIDGES USA, had been working with a group of Juvenile Court detainees on a public event where the youth would give policy suggestions on preventing youth violence. But a few days before the event was scheduled to be held, the organizers canceled it.

So Morrison and Burr decided to compile the recommendations of the young men into a letter.

The two’s project was spurred by members of the Memphis organization’s youth leadership program who wanted to connect with youth that had experience with the justice system, since none of them had. The cohort of 30 Memphis teens had previously selected the school-to-prison pipeline as their year-long community action project.

Soon after writing the letter, Burr and Morrison held a workshop with incarcerated youth at a Memphis jail. While the officers and guards remained silent, the youth talked about the systemic problems surrounding youth violence and recidivism. Chief Jailer Robert Moore then began a pilot program where the young men could develop their insights further and be equipped with the tools to help prevent other young people from ending up behind bars.

Under the direction of Burr and Morrison, the young men selected for the pilot received training in leadership, restorative justice, and public speaking. By the workshops’ end, the young men turned their collective thoughts into six models for change that they wished to see implemented within schools, local government, and the criminal justice system. The young men in the group first were known as Incarcerated Brothers Speaking Out for Change. Later, they changed their name to Incarcerated Youth Speaking Out for Change.

In January of this year, the young men presented their findings in front of an audience of over 400 at BRIDGES Youth Ignite Memphis, a city-wide competition to facilitate youth-led social change. Students attending picked IYSOC to win the competition.

“I would have to say that the young men in IYSOC today are not the same young men I met a year and half ago,” Morrison said. “They have become much more eloquent in their communication, more confident in their interactions with people different from them, and much more respectful toward one another. Within a few months of starting the program last year, Jail East saw a dramatic decrease in violence in the youth pod. Youth have avoided physical altercations by using nonviolent skills developed through the program. Even officer and youth relationships have changed. I’ve had officers off duty stop me in the streets asking about how the young men are doing.”

Before landing at BRIDGES, both Burr and Morrison’s previous work experiences helped prepare them for their current roles.

At Minnesota’s Carleton College Burr served as Alternatives to Violence program director. AVP is an association of community, school and prison-based groups with the mission of conflict resolution built on affirmation, respect for all, community, cooperation and trust. AVP was founded in prison and based on the actual experiences of prisoners.

Following college, Burr returned to her hometown of Memphis and worked as a community organizer in the education reform arena, and as a teacher, before she joined BRIDGES as Community Action Coordinator. Burr is an alumna of Bridge Builders.

“A huge part of what I’m really passionate about is bringing people to the table and networking and helping making collaborations happen around social issues, so that’s a huge part of my job now,” Burr said.

Morrison is also an alumnus of Bridge Builders; he first started working for the organization in his second year of graduate school as a Housing and Community Development Fellow in June 2014.

Four young men from the pilot are still involved (one was released); in August the next cohort of seven to 10 will begin with IYSOC.

Burr said that this year BRIDGES will be creating a youth fellowship program for those who have been involved with the justice system, so they can get paid a stipend to work to create change in improving the juvenile justice system on the ground level.

“There is only so much you can do from within the jail,” Burr said.

Elle Perry is a freelance journalist and photographer based in Memphis, Tenn. She previously served as Coordinator of The Teen Appeal, which was the Scripps Howard city-wide high school newspaper program. She is a two-time graduate of the University of Memphis Edward J. Meeman School of Journalism.