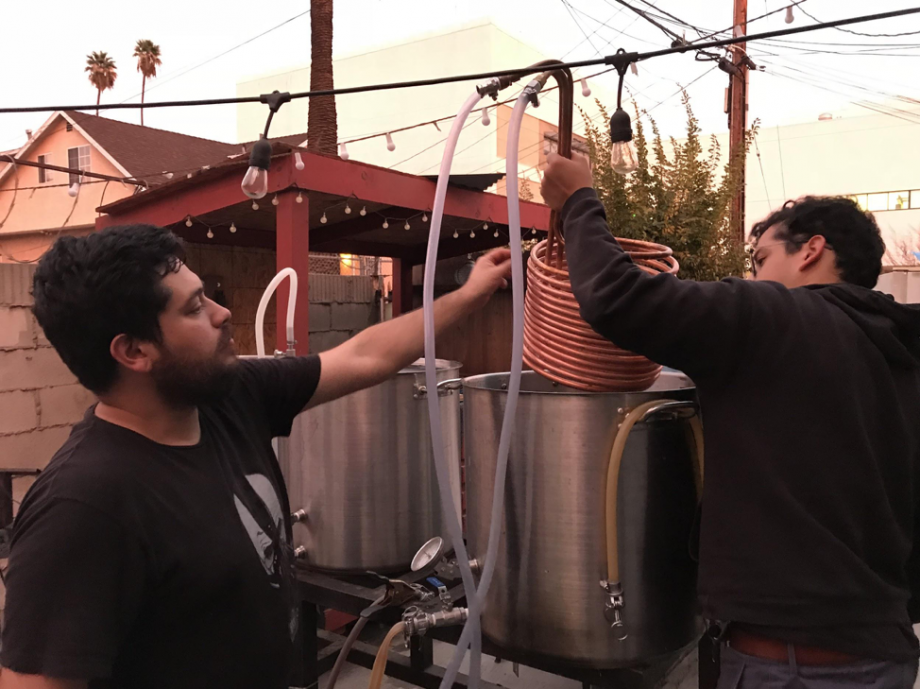 Alex Ruiz and Melvin Marroquin hovered near two large stainless steel pots, detaching and plugging tubes so cold water could run through a batch of beer they were brewing. The beer needed to cool down before yeast could be added in.

It was early December, and Ruiz and Marroquin were making their last gallons of beer for the year, which included a café de olla mix infused with piloncillo, cinnamon, anis, and coffee from a local roaster. They brew once a month from their backyard in South Central Los Angeles.

Ruiz, Marroquin, and Zaneta Santana are homebrewers who created South Central Brewing Company in 2016. They may not have large-scale equipment, a dedicated space, or a taproom — yet — but the way they see it, their backyard operation allows them to brew beer that’s by and for South Central.

The group of Latinx brewers wants to open a taproom in South Central, but it won’t be easy in a rapidly changing area where — among other developments — the new Los Angeles Football Club stadium recently opened and where the $1.5 billion Lucas Museum of Narrative Art is under construction.

“We don’t have the capital to just be like, ‘Let’s fucking do it tomorrow,’” Marroquin says.

The group met while in high school through the punk music scene and mutual friends. As brewers, it often feels like they’re racing against time. As they phrase it in their social media bio, they’re homebrewers and craft lovers who are “trying to make it happen in our hoods before them developers do.”

Breweries can be a source of community pride that serve as hubs where locals can gather. They’re also agents of economic development. California is home to more than 900 craft breweries in the state, more than any other state in the nation, according to statistics compiled by the California Craft Brewers Association. Craft breweries in 2016 contributed about $7.3 billion to the state’s economy, the data show.

Craft beer has also been a boon to rural communities and small towns like in North Carolina, where the industry generated $1.2 billion and 10,000 jobs, the North Carolina Craft Brewers found.

While the South Central Brewing Company founders all have jobs and careers outside of making beer, they want to do this full time eventually — but the city keeps getting pricier.

“A lot of breweries open up in more rural areas, but to want a brewery in South Central? It’s expensive,” Marroquin says. “At the very least I feel like we try to establish that we’re here in whatever way we can … We figured let’s name it South Central Brewing Company specifically for that reason. We’re going to take on that identity before anyone else does.”

For the group, it’s hard to avoid the influences of nearby downtown L.A. and USC. There’s the thriving food scene and high-rises and creative offices under development in downtown L.A. Meanwhile, the University of Southern California Campus continues to expand. In 2017, the university opened the $700 million USC Village— which includes a Trader Joe’s and Target — to house more students on campus.

It’s as if the city is closing in, says Ruiz, who works at a nonprofit with teens exploring tech.

“It’s narrowing down this whole idea of what is South Central,” Marroquin says.

The ingredients used to make the café de olla brew include anis, piloncillo, and oranges. (Photo by Alejandra Molina)

The brewers managed to afford their equipment by evenly splitting costs. Their backyard homebrewing setup cost about $2,500, including the pots, frame, and a sink they found for a deal on Craigslist. Because they brew from home, the group is not actually allowed to sell the beer. For now, the brewers often donate it to nonprofits who can sell the beer at charitable events.

Ruiz estimates startup costs for a taproom would be about $500,000. He said a real estate agent advised that in L.A., the brewers should have the financial backing to be in their space for about a year before they’re even allowed to open.

“That’s why we’re thinking half a million dollars just to be safe,” Ruiz says. “One or two of us will have to quit our jobs.”

For Latinx entrepreneurs, the lack of capital is often a major obstacle in starting and maintaining businesses. Non-Latinxs own employer businesses at nearly three times the rate of Latinxs, according to “The U.S. Latino Entrepreneurship Gap” report by the Stanford Graduate School of Business. If this entrepreneurship gap were closed, the U.S. could have an extra 650,000 businesses and an additional 5.3 million jobs, the report found.

“There are a range of opportunity gaps arguably preventing this group from reaching its full entrepreneurial potential, including negative impacts driven by lack of access to growth capital and the high cost of acquiring that capital,” the report says.

Ruiz said they’ve started a business plan they aim to finish around March. They plan to spend a year raising money with the goal of finding a location by 2021.

Aside from the financial challenges, the brewers will also have to face the stigma associated with breweries in communities at risk of gentrification.

Marroquin and Ruiz were raised in South Central, while Santana’s family is in Bell, Calif. Despite their local roots, they expect some backlash. In nearby Boyle Heights — a predominantly working-class Latinx neighborhood — anti-gentrification activists have been protesting breweries sprouting up in the area. The way the activists see it, breweries invite more affluent, higher-income hipsters to cross the L.A. River into the community.

To Marroquin, it just makes sense for people to embrace and share particular crafts, like beer-making or coffee, instead of relying on others to pursue such endeavors.

“Why does it have to come from somewhere else?” Marroquin says.