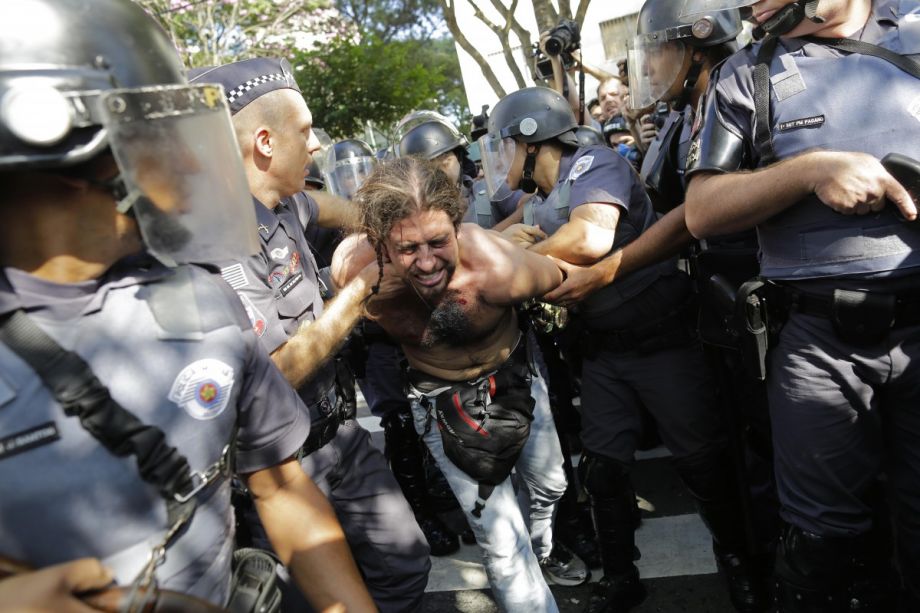 A protester is detained by police during a demonstration against the money spent on the World Cup in Brazil. (AP Photo/Nelson Antoine)

In the midst of the World Cup, some elements of the press seem enthused to report that protests in Brazil are small and populated by the dreaded “black bloc anarchists” who haunt the margins of some protests. (If they did not exist, clucking newscasters would have to invent them.) But while marching masses have largely been repressed by the threat of police violence, there have still been a series of smaller, more tightly focused protests around the World Cup presence. Here, a makeshift timeline of soccer protests, the groups behind them and the government reaction.

From afar, the first obvious manifestation occurred in early June last year, in response to a hike in bus fares in São Paulo, Brazil’s largest city. No one likes cost-of-living increases, and people are especially apt to notice centrally administered transit price hikes, and know just who to blame. It’s all the more infuriating when the national government is spending $27 billion on sporting events — including the 2016 Olympics in Rio — that are notoriously parasitic, providing little gain and much pain for locals. (A Free Fare Movement was mentioned in conjunction with the uprisings, although it is unclear whether they initiated the protests or piggybacked.)

By the time international media starts paying attention, about mid-month, lavish spending on FIFA events and the Olympics are already mentioned as points of contention. The fare hikes were rolled back by the end of June and President Dilma Rousseff promised reforms including greater investment in transit, health care and public education. Police violence was pervasive and brutal.

By July, the initial round of mass protests died down. A Forbes contributor cited a Brazilian newspaper’s count of the cities swept up in the unrest — 353 — and a São Paulo newspaper’s research, which showed that 77 percent of the protesters had some degree of higher education, over half were younger than 25, and 71 percent were first-time protesters. On July 11, the labor movement conducted a one-day mass strike across multiple cities, with bank tellers, bus drivers and dockworkers demanding a shorter work week in addition to greater spending on transit, education and health care. The New York Times described the action as “heavily scripted,” stating that some organizers “even met in advance with the authorities to work out the rules of the protest.” The whiff of tear gas was faint.

Police Crack Down Hard in September

The next round of unrest broke out in September in reaction to the militarized celebrations of Brazil’s independence day. These actions were smaller than the spontaneous hordes that typified the June unrest but still occurred across scores of urban areas. Law enforcement crackdowns appear to be even more aggressive. Protesters “were dispersed violently by the police [as the] broad flare-up of public ire has given way to an array of more fragmented movements, some of which have been struggling in the face of crackdowns by Brazilian security forces,” the New York Times reported&. Police dogs wounded foreign journalists and untold Brazilians were beaten, gassed, mauled and trampled.

Since the New Year, in the months leading up to the World Cup, the protests and work stoppages have been much more focused than the huge rallies of last June, more threatening than the one-day work stoppage of last July, but with a police response honed by the incendiary September actions. While smaller actions of eclectic protesters have taken place, the headlines are dominated by organized groups with real demands: Teachers, police transportation workers, garbage collectors and homeless workers.

These groups know that the international spotlight is resting on their nation and that they currently enjoy an unusual opportunity for leverage. They can make the government of Brazil look bad in front of the cameras by occupying public spaces, shutting down transit, and generally causing a chaotic spectacle. The state, in turn, can choose to retaliate with violent force or more subtle means of coercion.

The fates of two different protests illustrate the uncertain results of this game of chicken. The subway workers who struck for five days in São Paulo last week, and caused the worst congestion of the year and 125 miles of traffic jams, were harshly smacked down by a variety of repressive methods. The city government fired 42 workers for alleged vandalism and threatened an additional 300 with similar treatment; a judge declared the strike illegal and threatened a $222,000-a-day fine for each day the strike continued; and the police gassed, beat, and arrested participants. The subway workers gave up their strike.

These kinds of harsh police attacks have been very common, probably as a means to prevent a repeat of June. The New York Times and numerous other media outlets have shown videos of police waving around unholstered firearms and shooting live rounds to scare the crowds. An urban planning professor on the ground in Brazil, Christopher Gaffney, wrote, “There is nothing more likely to keep disenchanted middle-class people off the street (and to keep their kids at home) than the imminent threat of injury.” Nation reporter David Zirin, also on the ground, agrees: “It is certainly true that the numbers are smaller in comparison to the ones a year ago — hundreds and low thousands instead of hundreds of thousands — but … It’s not quiescence. It’s fear.”

There have been successes too. The Landless Workers Movement, which represents the almost two million homeless Brazilians, many of whom have become squatters, marched in support of the subway workers and, at the beginning of May, occupied a stretch of land close to a stadium in São Paulo. In return for a peaceful exit, they have secured a promise of 2,000 affordable housing units in that location and a commission to stop the expulsion of the families from the favelas, the makeshift neighborhoods where those with nothing make their homes. Untold thousands of these housing units have been destroyed, and their occupants forced out, in preparations for the World Cup. (Next City’s Forefront, “Ghettos of the World Cup,” examines the public housing boom that spread through Brazil in the run-up to the World Cup.)

“The response in Brazil has been a super-impressive, in-the-streets fight-back spring boarding off a sports mega-event double-whammy (the World Cup and the Rio 2016 Olympics),” says Jules Boykoff, in an email message. He is working on a political history of the Olympics and teaches at Pacific University. “It [is] one of the biggest, most sustained activist responses to a sports mega-event [in my lifetime].”

The current political context in Brazil may prove advantageous to demands from workers and homeless people, as President Rousseff tries to maintain her base in the run-up to the elections this autumn. (She is loathed by some powerful segments of the Brazilian elite, who hope the unrest will give them a chance to unseat her and end the Workers’ Party’s decade-long grip on power.) Her promise to invest $22 billion in public transit was a direct response to the events of June, as was her subsequent pledge of $3 billion for infrastructure in São Paulo. These sporting events give those without much clout in the electoral system a chance to create the kind of instability that may force yet more concessions from electoral leaders. But it’s a narrow window and it is unclear how long it will last or what else can be won.