Boston’s ‘Concert for One’ Brings Music to the Community, One Listener at a Time – Next City

Boston’s ‘Concert for One’ Brings Music to the Community, One Listener at a Time 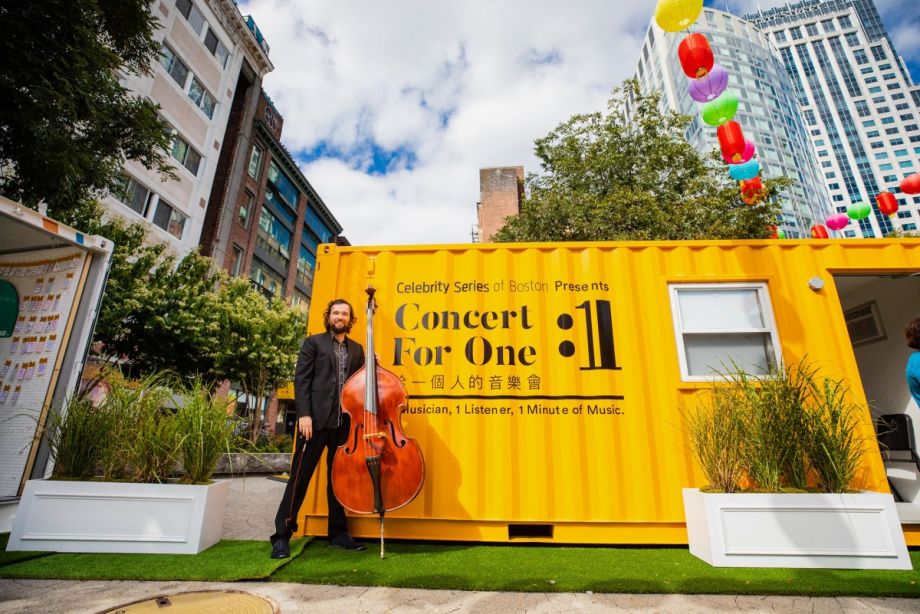 Chin Park near Boston’s Chinatown Gate bustles with life on a sunny late-September afternoon. Neighborhood children mingle on geometric play structures with the children of visitors; groups of men huddle around board games; visitors and local workers stroll through underneath strings of multi-colored paper lanterns.

For 10 days, a bright yellow shipping container has been stationed among the plaza’s tables and chairs. The mysterious container, labeled “Concert for One,” offers up surprise and delight to passersby in the form of an intimate, ephemeral musical performance — one musician, one listener, for one minute.

No advance information tells listeners what instrument, performer or type of music to expect. Once ushered inside, they find a musician poised to play in a 10-by-10-foot space containing a plant, a music stand and just two chairs that put listener and performer nearly knee-to-knee.

People waiting in the queue appear uncertain or neutral, but one by one, they exit the container with broad smiles and looks of wonder.

“It’s amazingly intimate,” says Caprice DeLauder, 59, a recent transplant from Tennessee to the Boston area. She felt moved by the viola piece she heard — an African-American love song, she was told. “It brought tears to my eyes,” she says.

Monica Le and her 7-year-old daughter Zoe emerge from their one-minute performance and head to the adjacent exhibit space that includes instruments people can try out.

“It was like we were in someone’s living room. My daughter loves music, but she’s never had that kind of experience,” Le says, as Zoe reaches for a small violin hanging at child-height. The little girl adds her own summary: “I think the musician did an awesome job and she practices a lot. She smiled and was so nice to us. I loved it!” she says.

“Concert for One” is part of the nonprofit Celebrity Series of Boston’s annual outdoor public performance series that aims to reach new audiences. Previous projects have included walkable jazz performances along the Charles River and decorated pianos placed around the city for anyone to play.

Karen Brown, director of performance operations, says that over 10 days, the one-minute individual concerts will reach an estimated 4,500 listeners at two sites, Chin Park in Boston and a plaza outside Harvard’s Science Center in Cambridge. The roster of 58 musicians, culled from 200 applicants, includes professional musicians, music students and highly trained amateurs. They play in one-hour shifts.

Violinist Jean Huang plays for a guest inside the “amazingly intimate” Concert for One container. (Photo by Robert Torres; courtesy Celebrity Series)

The short, intimate performance model is the brainchild of violist Rayna Yun Chou, a New England Conservatory graduate. In 2016, she created a similar installation, “Music, Distance and One Minute of Just Us,” in her native Taiwan. Last year, she submitted the idea in response to Celebrity Series’ call for proposals, and “Concert for One” was conceived.

Chou’s impetus for the original project was a desire to forge connections between classical musicians and everyday people who may not have the familiarity or the means to enjoy classical music.

Brown describes a similar aim for “Concert for One” in Boston.

“Think about it — how many barriers are eliminated here?” Brown says. “You don’t have to reserve a seat or buy a ticket. You don’t have to know when to clap. You don’t have to go far from home.” While the Harvard site drew mainly the university community and tourists, the Chinatown site served a large number of neighborhood families and children. She and other staff noticed repeated visits by students from an elementary school nearby in Chinatown, many of whom spend time in Chin Park on weekends and after school.

Chou, the violist who originated the model, participated in “Concert for One” as performer, listener and site observer. Dropping by Chin Park on this day, she says the mini-concerts allow musicians to see their impact on people in a very direct way. In some ways, it can build the players’ own self-confidence.

“When we study music in school, they say, ‘Don’t be nervous, the listeners are on your side.’ But it’s hard to believe that until you come here, as a player and as a listener.”

Chou says she did not envision replication of the model when she first designed it, but she sees it as “adaptable.” Implementing it well, though, takes a lot of resources, she notes.

Indeed, Brown estimates the hard costs for Celebrity Series totaled $130,000 for 120 total hours of programming over 10 days in two sites. The musicians were compensated, and four to five paid staff members worked the sites to coordinate activity and guide visitors. Other logistics considerations, she says, included selecting sites that are large enough to hold both the shipping containers and queues of unpredictable length, are able to accommodate a flatbed truck entering to drop off the containers, allow access to a power supply — and promise plenty of foot traffic and a diverse set of visitors.

While costly, presenting a multiple-day run rather than a single event is key to building local engagement, she says, as people share the experience with relatives and neighbors and word of the event spreads.

In Chinatown, the magic didn’t happen overnight. Brown says there was initial distrust by the local park denizens, especially the older adults. A Celebrity Series staff member who speaks both Cantonese and Mandarin was able to cut through some of that, but barriers of class, education and previous classical music exposure were evident as well.

“We were struck by the fact that locals would see a violin and assume ‘This isn’t for me.’ It took repeated engagement and encouragement — and it was through younger people, the children and their parents.” Brown says. “The most rewarding part of this experience was watching the Chinatown community move, over the course of 10 days, from not having much trust to people trying it and coming out with a smile on their face. It just took time.”

Tags: arts and culture, boston, for whom by whom