Boston Wants to Build Inclusion into Its Construction Boom – Next City

Boston Wants to Build Inclusion into Its Construction Boom 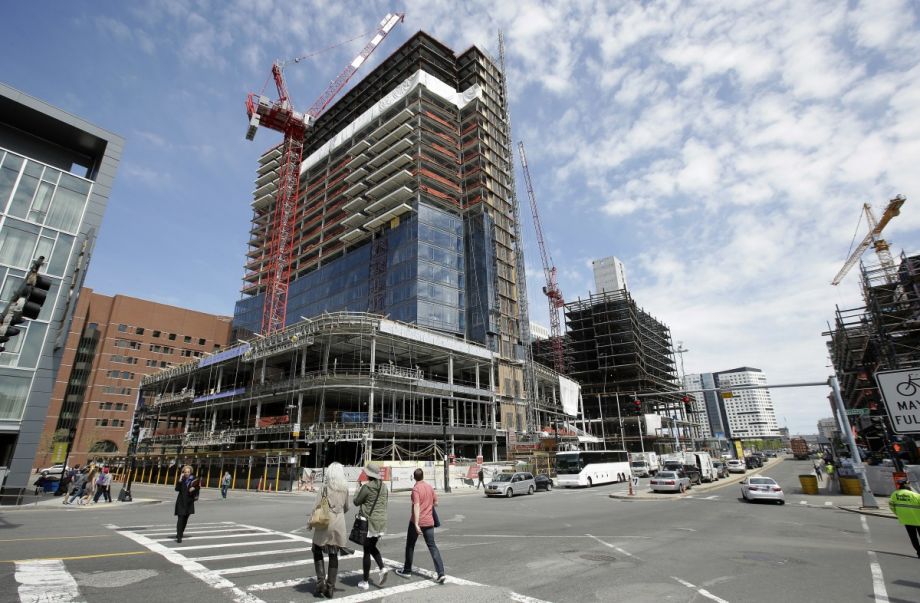 Boston's construction boom has been going on for a few years now. (AP Photo/Steven Senne)

In the midst of that growth, however, one big concern has emerged.

“There’s big money being invested and big money being made, but it is not, by any stretch of the imagination, being shared equitably by the people of Boston,” says Brian Golden, director of the Boston Planning and Development Agency.

Golden points to the “extraordinary disparity” that divides Bostonians. In 2014, the city was found to be the most income-unequal big city in America. A 2017 study published by the Federal Reserve Bank of Boston found the median net worth for Boston’s white households was $247,500, while the median net worth of an African American household was just $8.

In recent years there’s been a realization within the planning department, Golden says, “that it is incumbent upon us to develop tools that help us move real estate development in Boston in a more equitable direction.”

This month the city announced a new set of criteria to better promote diversity and inclusion, as well as prevent displacement, in Requests for Proposals released for public land within the city. All developers proposing to develop city-owned parcels must now include a “Diversity and Inclusion Plan,” aimed at creating increased opportunities for people of color and women in the fields of construction, design, development, financing, operations and ownership.

The initiative comes as city politicians have become increasingly vocal about the city’s inequality as it rapidly develops.

Last year, Council Members Michelle Wu and Ayanna Pressley spearheaded an ordinance calling for similar diversity plans on city contracts and construction projects. The pair will soon receive data on the city’s past contracts and funding, “to understand what percentage of our dollars are going to businesses owned by people of color and women,” says Council Member Wu.

“We know it’s going to be disappointing to see those numbers. There’s a lot of work to do,” she says. “Across the board, city government is talking about how to reduce income inequality.”

Inequality was an early priority for Mayor Marty Walsh, who released a comprehensive housing plan at the start of his mayoral tenure and set goals to develop more income-restricted housing as Boston’s population increases. In 2015, a city-owned downtown parking garage — where redevelopment proposals had failed to materialize — became a testing ground to address inequality through new development.

“It was clear this project had to work for many Bostonians… [the city] wasn’t as specific on how to do things, but they were clear this project needed to address issues of economic inclusion and economic justice,” says Joe Larkin, a principal of MP Boston, the developer selected by the city to develop the parcel into a multi-use skyscraper in 2016.

Setting such goals meant the firm had to come to terms with the lack of diversity in the industry.

“Everyone on our team has a history of being really good at what they do, and so we’ve asked them to come back and do it again,” Larkin says. “It’s an easier thing to do rather than realize there are lots of people who never got the start in the first place.”

MP Boston looked for specific ways to address inclusion in each industry that contributes to building development. In architecture, for example, Handel Architects, an established New York City-based firm, and DREAM Collaborative, a local, minority-owned firm, were selected to collaborate for the building design.

In construction, MP Boston worked with an electrician union to better promote and expand its apprenticeship program in minority communities. “In this year’s apprenticeship class, [the union] saw the highest number of applications from people of color, which has been turned into the highest class of people of color,” Larkin says. He views these early efforts as contributing to “a growing established infrastructure of minority-owned companies.”

MP Boston’s efforts encouraged the planning department to set more specific goals for developers moving forward. “They articulated a really constructive package that looked at the development deal holistically,” says Golden. “So we’ve begun to seek replication of those goals.”

He looks at the planning agency’s diversity and inclusion criteria for public land as a space for developers “to be creative and compelling” in changing up business-as-usual. “We want developers reaching out to neighborhood groups, academics, contractors, figuring out how to put their best foot forward,” Golden says.

Golden notes that there are hundreds of city-owned parcels, varying in size, that will now require a diversity and inclusion plan under the new criteria. A number of those parcels are the result of Boston’s aggressive urban renewal policies starting in the 1950s. “By embedding the diversity and inclusion plan, we can develop these parcels in a way that benefits a whole lot of Bostonians who otherwise would be left behind,” he says.

“Will this policy get us to the promise land, a totally equitable society we seek?” Golden asks. “No, not this policy alone. But it’s a meaningful step in that direction.”