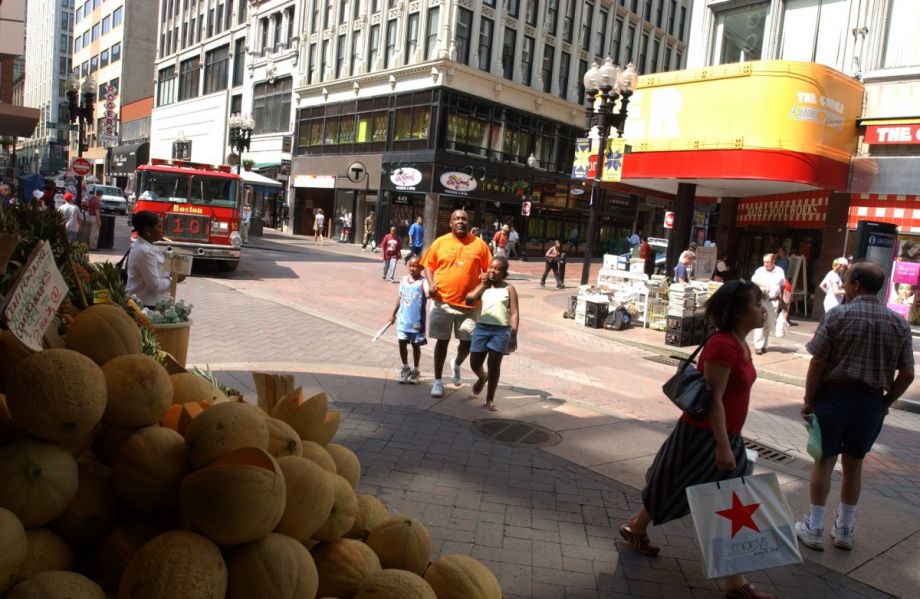 Bikes might be hogging the trend spotlight these days, but cities are smart to cater to those who move by shoe.

And Boston is one place that’s set to be a leader in that regard, according to the people behind last year’s ranking of walkability in the 30 largest metros in the U.S.

The region is home to 57 key “walkable urban places” that make up only 6 percent of the metro’s land area. The rest of the region misses out not only on walkability, but a majority of commercial real estate development, according to “The WalkUP Wake-Up Call: Boston,” which was released today. The authors, Chris Leinberger and Patrick Lynch of the George Washington University School of Business, say that walkable urban places (what they call WalkUPs) attracted the majority of real estate development in the last cycle and concluded that pedestrian-oriented living is in high demand in Boston:

Previous research has demonstrated the correlation between walkable urban places and both the education of the metropolitan work force and the GDP per capita. The current research confirms this finding: For example, since 2000, 70 percent of the population growth of young, educated workers has occurred in the walkable urban places of the Boston region.

“This analysis validates the shift towards walkable urban development that we’ve seen across the country,” said Leinberger, who has contributed to Next City. “This change will reshape the way we approach urban design and planning, regulation, financing and construction nationwide. The findings will play a critical role in the guessing game of where developers and investors should be looking in the future.”

Leinberger’s a dedicated proponent of walkable urbanism and transit-oriented development, and is involved in real estate too.

The highest-ranking WalkUPs receiving the report’s “platinum” designation in the economic category included Back Bay, Beacon Hill and MIT/Kendall Square. All are located in or near downtown, with rents averaging 9 percent above the second tier of WalkUPs that got a “gold” label.

The “copper” WalkUPs are largely outside of Boston’s core metropolitan area, such as downtown Gloucester and Lowell.

“Many of the copper-ranked WalkUPs have inherited a street network devised before the rise of the automobile, meaning they have the appropriate ‘bones’ for future walkable urban development,” the study notes. “Unfortunately, some of these WalkUPs do not have appropriate zoning for what the market wants, generally not allowing sufficient density for new development and economic growth to emerge.”

For those connecting the dots between gentrification and transit-oriented development, the study’s authors suggest that the cure for rising rents in desirable, walker-friendly neighborhoods is to build more desirable, walker-friendly neighborhoods. Noting that reliable public transit is key to walkability, they also fire a warning about MBTA, which struggled mightily this winter with keeping public transit running during major snowfall.

“It’s clear from this research that reliable and efficient transit service is vital to the success of walkable urban places, which are largely clustered around MBTA stations both in the rapid-transit served core and on the outer reaches of the commuter rail,” said Barry Bluestone, director of the Dukakis Center at Northeastern University, which is also behind the report. “In order to realize the private market investment in these walkable urban places, we are going to have to improve capacity and resiliency of the MBTA.”

Accessibility, affordability and opportunity dominate the report’s social equity rankings. The number of platinum-ranked WalkUPs doubles, with 10 neighborhoods remaining “somewhat affordable” and in close proximity to public transit and job centers. Nine of the 10 copper-ranked social equity WalkUPs overlap with the lowest economic ranking of WalkUPs.

The study also pinpoints 14 emerging (East Boston, Ipswich, Needham are a few) and eight potential WalkUPs (includes Everett, Natick, Stoughton) and concludes that a push toward walkable urbanism could have better long-term effects on real estate pricing and have major implications for policymaking:

Policymakers must understand how to position their communities to take advantage of this shift in market demand. At a minimum, the government must not discourage walkable urban development with outdated, auto-oriented zoning codes and parking regulations, or long public approval processes.

For all the neighborhood rankings, read “The WalkUP Wake-Up Call: Boston” here.