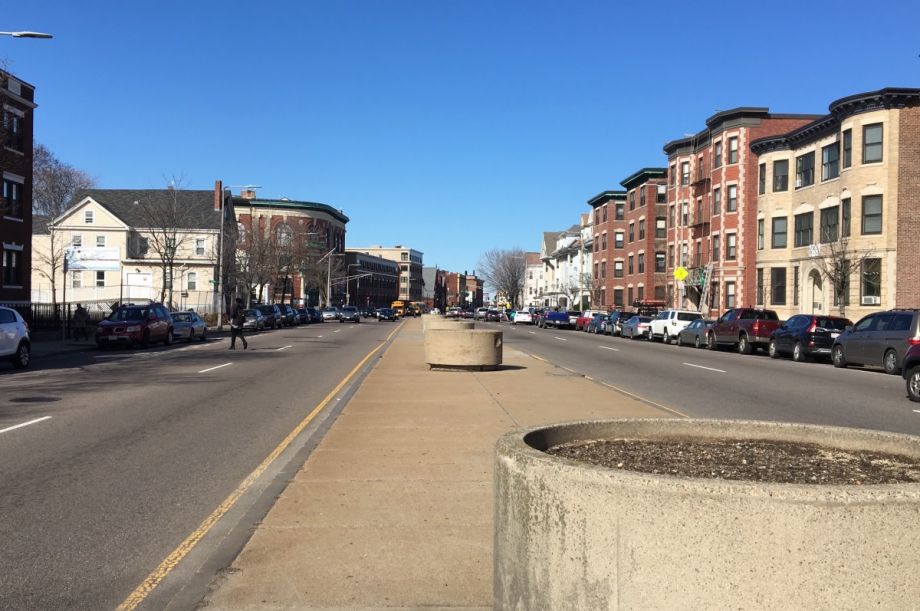 When landscape architect Frederick Law Olmsted designed his renowned park system in Boston in the 19th century (later dubbed the Emerald Necklace), he envisioned a series of natural refuges from the growing city, connected by tree-lined parkways. Park commissioners planned for one of those connections to be a wide boulevard in Dorchester, Boston’s largest neighborhood, which would bridge a large gap in the system between the 527-acre Franklin Park and Marine Park on the ocean waterfront.

Logistical challenges stymied the plan. Today, the main section of that road — a two-and-a-half-mile stretch called Columbia Road — is far from Olmsted’s vision. It’s a wide, heavily trafficked thoroughfare split by desolate concrete medians and flanked by a smattering of street trees. It runs through some historically disadvantaged neighborhoods that lack amenities and public transportation. And it passes through one of the city’s most dangerous intersections for pedestrians and drivers, a free-for-all rotary called Kosciuszko Circle.

But there’s a growing movement among planners and green space advocates to fulfill Olmsted’s vision by turning Columbia Road into a greenway. Advocates see it as a way to bring green space and paths for walking and biking to a neighborhood that has long been neglected. And the city has tentatively embraced the idea, including Columbia Road in its larger ambition to add green corridors throughout the city.

Greenways have been a growing priority for Boston. In 2014, the Boston Society of Architects (BSA) Urban Design Committee and the nonprofit LivableStreets Alliance held a design charrette in which local landscape architects and planners proposed ideas for greenways in the city, including along Columbia Road. The event spurred the creation of LivableStreets’ Emerald Network program, which advocates for a 200-mile network of off-road paths for pedestrians and bikes connecting open spaces in the region. The Boston Transportation Department also launched a Boston Green Links plan to fill in missing bike and pedestrian connections to greenways with paths, bike facilities and safer road crossings.

A Columbia Road greenway was also floated by planners involved in Boston’s bid to host the 2024 Olympics, as a way to direct Olympic funds toward needed civic improvements. (Lacking enthusiastic public support, the city ultimately withdrew its bid.) More recently, Columbia Road has found its way into Boston’s planning discussions. Mayor Marty Walsh has expressed a commitment to greenways, and to Columbia Road in particular. The street was highlighted in a draft report for the city’s first master plan since the 1960s, Imagine Boston 2030, and also in its recent transportation plan, Go Boston 2030. The latter estimates that the greenway vision would cost about $17 million just in the planning and design phase, and take five to 10 years.

So far the project has not found its way into Boston’s capital budget.

“We’re at the very early stages of the planning process,” says Natalia Urtubey, the mayor’s director of engagement. Any project would likely require a mix of federal, state, city and private funding, she adds, and “a very elaborate collaboration between a lot of parties.”

To help spur discussion about what a greenway could look like, the BSA is hosting a four-part discussion series (the first was on March 29), which includes presentations from designers and advocates of green corridors in the U.S. and abroad, including the South Bronx Greenway and High Line in New York, the 11th Street Bridge Park in Washington, D.C., the Indianapolis Cultural Trail, and Superkilen park in Copenhagen. “We’re hoping to push everyone to think a little bit farther and dream a little bigger about what the corridor could look like in 10 or 15 years,” says Elliya Cutler, civic initiatives program manager at BSA.

Olmsted’s legacy looms large in Boston, and the idea of fulfilling his vision carries resonance for many residents and planners. But that doesn’t mean that a greenway along Columbia Road would look anything like well-known Olmsted-era parkways. For one, the original parkways were designed as carriage roads; automobiles have turned many into speedways. Nidhi Gulati, program manager at LivableStreets Alliance, says that the focus should be on slowing traffic, making walking and biking more pleasant, and building an amenity for the people living along Columbia Road.

But those goals will need to be balanced against considerable local and crosstown car traffic. Any design that hinders driving and parking is likely to meet opposition in an already congested city. A rough design for a Columbia Road greenway, developed for the 2014 design charrette by Alan Mountjoy and Alex Krieger of architecture firm NBBJ, removed medians and maximized shade trees along sidewalks. Mountjoy says they tried to honor the road’s existing uses by prioritizing walking paths over separated bike lanes, and maintaining on-street parking.

The 1894 plan for the Emerald Necklace park system in Boston

Even in the 19th century, Columbia Road was a planning challenge. Surrounding development limited its width, and space was given to traffic rather than trees. Today, Columbia Road will be an important test case for how Boston can plan and design linear parks through its dense and diverse neighborhoods. Unlike in Olmsted’s time, the design will arise from a lengthy process of community outreach. A greenway would require buy-in to a cohesive vision from community groups already active in adjacent neighborhoods. “The bigger challenge is how do we tie the mini-neighborhoods together?” says Gulati. She says that planners will also need to address concerns about displacement and gentrification in Dorchester, where housing prices have climbed.

Corey Allen, executive director of the Franklin Park Coalition, spoke at the recent BSA event about the diverse array of businesses, housing, parks, schools and historical attractions already along Columbia Road, including Boston’s oldest house, the 17th- century James Blake House. He says he hoped to convince designers not to see it as a generic blank slate. “How can we look at the organizations and the existing infrastructure that are on and adjacent to the road,” he says, “and highlight what is already there?”

Courtney Humphries is a freelance journalist in Boston covering science, health, nature and the built environment.