Boston Fed to Small Massachusetts Cities: We Want Your Best Ideas for Collaborative Problem-Solving – Next City 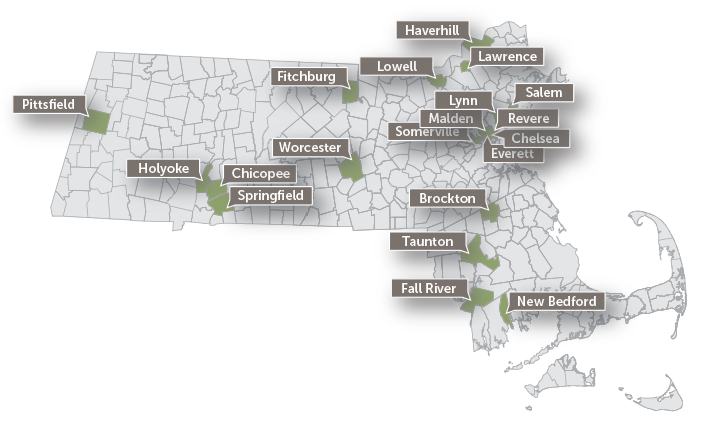 The 20 Massachusetts cities eligible to enter the Working Cities Challenge.

A new grant competition for smaller Massachusetts cities launched today, promising up to $700,000 for specific projects that can help change the lives of low-income people.

The catch: All proposals must involve cooperation between the private, public and non-profit sectors.

Open to 20 eligible cities in the Bay State — applicants must have populations above 35,000, a median family income below the median level and a poverty rate above the median level — the Working Cities Challenge seeks to award ideas for large-scale change and provide the resources to help them become a reality. (Boston will not participate.)

Spearheading the competition is the Federal Reserve Bank of Boston, which carries out the responsibilities of the Fed in New England and which also, thanks to the Community Reinvestment Act, has a community development mandate. The Boston Fed will not award grant money or have a vote in which cities win, but it’s bringing together the partner organizations that will. These include the Massachusetts state government as well as Living Cities, the philanthropic collaborative.

Why the emphasis on cross-sector cooperation? A 2009 Boston Fed report, which examined “resurgent” cities — or cities that suffered from deindustrialization but have since enjoyed some degree of economic turnaround — found that more than any specific policy or imitative, this kind of collaboration was a key factor in their recovery.

“The emphasis here is on having this table where your public, private, non-profit, philanthropic and anchor institutions sit together to enact a vision that will move the city forward,” said Prabal Chakrabarti, the Boston Fed’s vice president of regional and community outreach.

Winning proposals, Chakrabarti said, will have to aim for some kind of systemic change, whether that’s in public policy or the way things are financed. But other than that, there’s a lot of wiggle room in terms of which issues get targeted.

“As long as it has a large-scale result and it’s going to benefit low-income people, we’re open to any idea,” said Ben Hecht, president and CEO of Living Cities.

As Hecht explained, the various smaller cities throughout Massachusetts represent a sizable mix of experiences, problems and opportunities. New Bedford and Fall River once relied heavily on shipping and need to diversity; Lowel and Lawrence are former manufacturing powerhouses; Somerville and Everett want to be more than bedroom communities of Boston; Worcester has universities but also room to grow.

“In many ways you get a mini U.S. in Massachusetts,” Hecht said, adding, “There are many different economies even within one state, and the challenge is, how do you build on the strengths that you have?”

All 20 of the eligible cities have submitted letters of intent, Chakrabarti said.

Could this narrowly focused, state-based approach to urban problem-solving work elsewhere? This is a pilot program, Chakrabarti stressed, but both he and Hecht were enthusiastic about replicating Working Cities in other regions if it proves successful.

According to Chakrabarti, the Boston Fed will hold workshops to help cities refine their proposals, which are due by late July. Winners will be announced in January of next year.