In Boston, Climate Change Could Take the Food Off Your Plate – Next City

In Boston, Climate Change Could Take the Food Off Your Plate 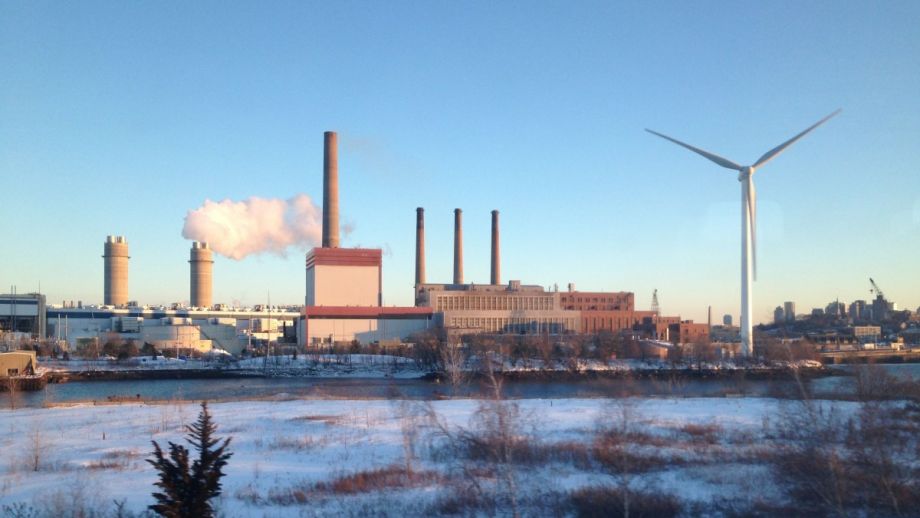 Few people living in the Boston area are familiar with a stretch of industrial buildings tucked away near an inlet of the Mystic River just a few miles from downtown. But much of the food that residents across the metro eat passes through this site — a major food distribution center that straddles the cities of Chelsea and Everett — before making its way to grocery stores and restaurants. Now, local scientists and engineers warn that the low-lying area is increasingly vulnerable to flooding due to climate change. A future storm surge could inundate the area, putting Boston’s food supplies in peril.

The food distribution center is one of several sites in the area where local flooding could have wide impacts on the region, and many cities, towns and neighborhoods may need to work together to plan and finance a solution. Boston’s Metropolitan Area Planning Council (MAPC), a regional planning agency, is leading an effort to bring scientists, planners and local officials together to address the problem.

In 2015, the MAPC launched a climate change preparedness task force through the Metro Mayors Coalition, a group of leaders from 14 Boston-area communities. One of its priorities was to identify areas where climate change could have far-reaching negative impacts, and the food distribution center was a top priority.

The area is home to the New England Produce Center — a terminal for fruit and vegetable distributors — and several wholesale food service distributors. “The distribution center is a regional resource,” says Marc Draisen, ­MAPC’s executive director. “We can’t just leave it to Chelsea and Everett to handle. We need a regional solution.”

In spring 2016, MAPC sought technical assistance through Thriving Earth Exchange, a program run by the American Geophysical Union that connects communities with Earth and space scientists willing to work pro bono. Chris Watson, a researcher at University of Massachusetts Boston, agreed to take on the project. Watson, who’s part of a team of scientists who have analyzed future sea level rise and flood risk for Boston, says he’s been concerned about the area for years.

The project has been aided by a parallel effort by the city of Chelsea, which received a state grant to conduct an in-depth climate vulnerability and adaptation study, led by international design and engineering consulting firm Stantec and Woods Hole Group, a Massachusetts-based engineering firm.

The Woods Hole Group previously worked with UMass and University of New Hampshire researchers to develop a sophisticated model of Boston’s future flood risks, funded by the Massachusetts Department of Transportation, and nearby communities like Chelsea are now extending this model to their own neighborhoods and infrastructure. Unlike FEMA flood maps, which are based on historical storms, this “hydrodynamic” flood model includes the effects of winds, waves and tides to better predict the water’s path, and takes into account future sea level rise and temperatures. Rather than predicting a single storm, such as the 100-year flood, the model runs through many simulated storms, and produces an averaged probability that a given storm will inundate an area in a given year.

The good news is that a fix for the problem could be relatively attainable. At a climate change summit for the Metro Mayors Coalition in November, Kirk Bosma, a coastal engineer with Woods Hole Group, explained that while the extent of flooding worsens, the water enters from a narrow flood path. “Does that tell me I need to build a big seawall around the whole city? No,” he said. “I can do a very cost-effective solution at a very targeted location that provides resilience, both today and going into the future.” At the meeting, Bosma presented a preliminary design proposal for Island End River, which includes a living shoreline with earthen berm on one side, a concrete retaining wall on another, and a restored salt marsh with tidal channels, designed to protect the area up to 2070.

Boston is projected to be disproportionately impacted by rising seas: A new report on climate change in Boston finds that local sea level could rise anywhere from 2 to 10 feet by the end of the century. It discusses a range of adaptation possibilities for Boston Harbor, from similar shoreline interventions to a future massive barrier linking the Harbor Islands that could cost $10 billion or more. But Bosma said he’s finding that in several locations around the city, topography constrains flood paths, making it possible to protect large areas with targeted and relatively low-cost solutions — at least for several decades. The city of Boston recently was awarded a $227,000 grant from the state’s Office of Coastal Zone Management to develop and design nature-based coastal resiliency strategies for two sites in Charlestown and East Boston.

Watson says that Island End River represents a more complex problem: a site that spans public and private land and political boundaries. “MAPC is stepping up to the plate to start the conversation on regional solutions to climate problems,” he says.

But stakeholders will need to work together to plan and fund any such project. Axum Teferra, an energy planner at MAPC who is coordinating the Island End River assessment, says that once the flooding vulnerability analysis is completed by UMass Boston, MAPC will work closely with Chelsea and Everett to launch a discussion with the property owners, community-based organizations and the state to work toward a collaborative solution.

Courtney Humphries is a freelance journalist in Boston covering science, health, nature and the built environment.