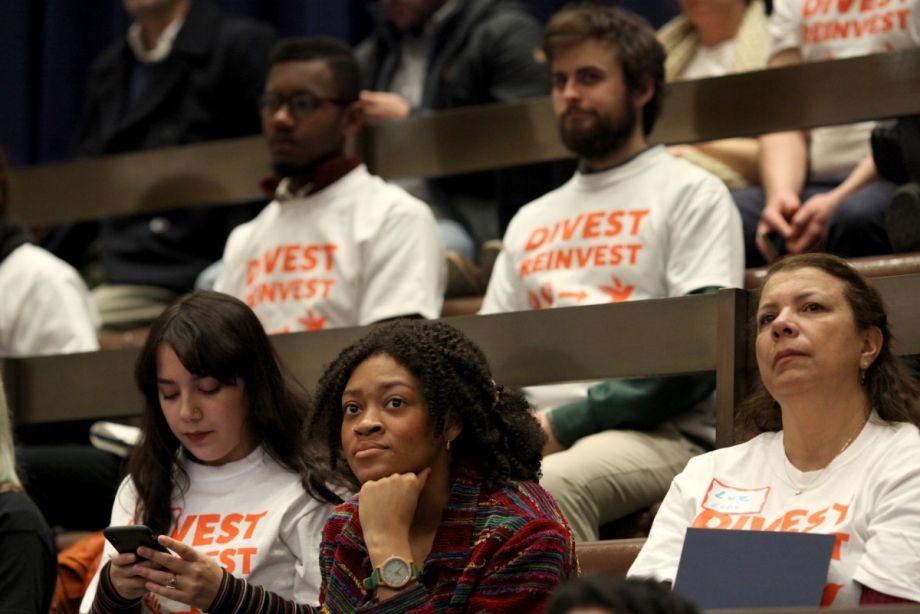 A group of Boston city councilors is pushing to change the way the city invests a municipal pension fund, to better serve residents and reflect the city’s goals on racial equity, climate change resilience and more.

Following the lead of cities such as New York, which has divested from direct holdings in private prisons and announced plans to divest from the fossil fuel industry, and Portland, Oregon, with its socially responsible investment screening, the Boston councilors, along with local advocacy groups like Ujima Project, are calling for the city to divest from corporations involved in fossil fuels, private prisons, predatory loans and weapons.

But besides pulling money out of harmful industries — and even beyond putting it into traditional socially responsible funds — they seek to go further, aiming to reinvest money into community assets like local businesses, green energy initiatives and community land trusts.

Councilors Lydia Edwards, Michelle Wu and Matt O’Malley co-sponsored a hearing at City Hall on Feb. 28 to examine where city money is being invested now and what mechanisms could allow funds to be redirected.

In her opening statement, Edwards recalled the city’s past leadership in divestment action. In 1984, Boston enacted one of the earliest and most far-reaching ordinances to divest from apartheid-era South African interests.

“We’ve done this before,” Edwards said. “Now can we go a step further, by asking not simply what we should not do, but asking residents where our money should go?”

Edwards said in an interview that the current push began with work Wu and O’Malley did in support of an earlier state effort to divest from fossil fuels. When Edwards joined the council in 2018, she added private prison investment as an investigation target.

“We found that we didn’t know where our money was,” she said.

At issue is the approximately $5 billion fund controlled by the city’s Retirement Board. (Another $1.7 billion earmarked for retired teachers is controlled by the state.) During the February hearing, councilors learned that some $23 million of that is invested in the fossil fuel industry. Another $100,000 to $130,000 is in interests related to for-profit prisons, and other investments support student loan servicers, some of which have racked up complaints and lawsuits over predatory or deceitful practices.

Emme Handy, the city’s chief financial officer, said that some of the investments the councilors deem unsavory, including private prisons, are part of a complex structure of commingled funds managed by others, making them more difficult to pinpoint and winnow out.

At the hearing, Handy, along with Timothy Smyth, executive officer of the Boston Retirement System, and representatives of the city’s external investment management firm, described their fiscal management practices. A current priority is “aggressively paying down unfunded pension liability” toward the goal of full funding by 2025, which helps retain the city’s coveted AAA credit rating. The fund needs to maintain an average return of 7.5 percent to stay on track toward the full funding goal, they said.

The retirement system serves 46,066 current and retired city and county employees. Last year, the fund paid out more than $613 million in benefits to 14,448 retirees and beneficiaries, up from $515 million in 2013. Nearly 700 people start receiving benefits every year.

While advocates testified on the human toll of mass incarceration and climate change, Smyth put the retirement fund in human terms too.

“I’ve thrown a lot of figures at you. However, I don’t see them as numbers,” Smyth said. “To me they are the 40-year City Hall employee who is naturally anxious about retiring and living on a fixed income … the employees dying of cancer that we visit in the hospital, and when you show what the benefit will be to their beneficiaries, you can see the relief on their face,” he said. “We provide benefits that allow our members and beneficiaries dignity in their retirement years and, for many, a financial lifeline.”

“It’s an easy fallback to say, ‘We’re in commingled funds and we can’t do anything,’” said Sada Geuss of Trillium Asset Management. “When you’re bringing $5 billion to asset managers, you’d be amazed how open they are to having a conversation with you, particularly when you’re looking at something like private prisons, which are a terrible business model.”

Pat Tomaino of Zevin Asset Management said that Boston is not matching some of its peers in terms of committing to specific investment standards and making regular public disclosure of pension holdings. He echoed fellow panelists in asserting that socially responsible investing and excluding harmful industries does not hurt performance.

Indeed, evidence is growing that sustainable funds, which prioritize environmental and social benefits, have held their own or outperformed the broader market in recent years.

Just hours before the divestment/reinvestment hearing, Boston Mayor Marty Walsh announced a plan to invest $150 million of the city’s operating funds in companies adhering to a set of environmental, social and governance (ESG) criteria. While councilors and advocates commended the city for this action, it doesn’t affect the pension fund, which remains a tougher nut to crack.

Boston’s 1984 pension divestment effort began with the City Council but then required buy-in from the mayor and ultimately alterations to state law, enacted only after state legislators twice overrode two vetoes.

Legislative action at the state level — whether for statewide rule changes or a home rule exception for Boston — remains a time-consuming and uncertain process. The nearby city of Somerville’s decision to divest its pension fund from fossil fuel companies met a snag last year when the state’s Public Employee Retirement Administration Commission (PERAC) ruled that divesting would violate fiduciary duty under state law by constraining investment diversification options.

Bob Massie, longtime activist on climate and social justice issues and former member of the Somerville Retirement Board, suggested that PERAC misinterpreted fiduciary duty rules. Massie said the statute’s wording is clear that diversifying investments is the required path “unless under the circumstances it is clearly prudent not to do so” — implying freedom to exclude industries in decline.

“In my judgment, divestment can be smart, legal, effective and in many cases urgent,” Massie says. “We judged that our fiduciary duty required us to restrict our investments because the fossil fuel industry is a broken and dying business model.”

Local advocacy group Fossil Free Somerville cites data showing that the fund would have seen an improvement in performance with the removal of the fossil fuel sector. Nonetheless, the Boston Retirement Board so far appears hesitant to pursue similar moves.

Next steps for the City Council include holding a working session to discuss what can and can’t be done at the city level. Then the body will assess options to seek state-level action. They’ll study city practices for screening future investments too.

Wu, in an interview after the hearing, suggested that while Boston is now committing to socially responsible investing of a portion of its operating funds, it’s doing so more as a follower than a leader.

“Practices across the industry have shifted in response to demand, so the city has been on those coattails, in a way,” she said. “Any client, especially one with a large portfolio, can have a tremendous influence, if we have political will. We can’t just keep waiting for other investors to move first and then just tag along. We should be the ones setting policy.”