Beefing Up Big-City Marathon Security, One Year After the Boston Bombings – Next City

Beefing Up Big-City Marathon Security, One Year After the Boston Bombings 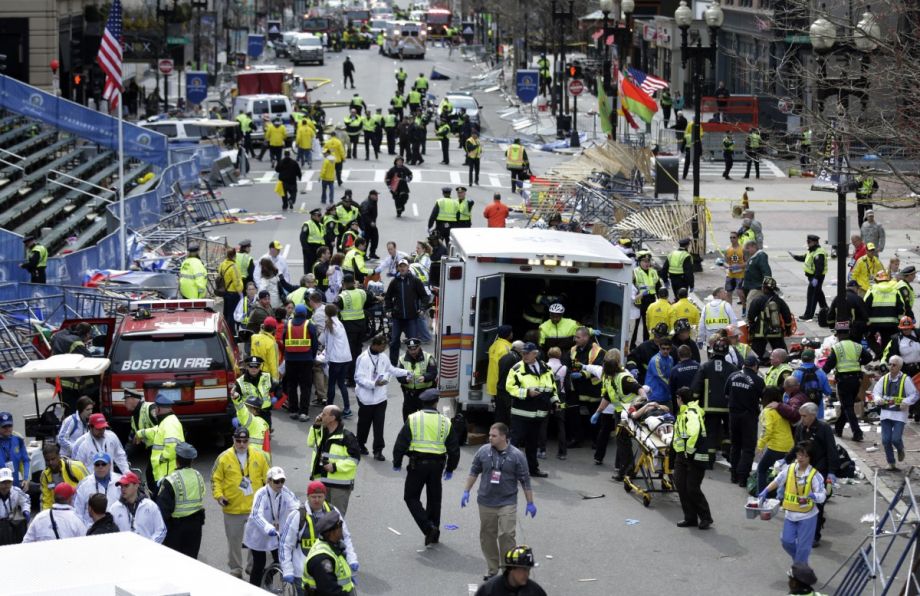 The city of Boston plans to have about twice as many police officers on hand for this year’s marathon as it did last year. Credit: AP Photo/Charles Krupa

The big-city marathon changed irrevocably when two pressure cooker bombs went off near the finish line of the Boston Marathon last year, killing three and injuring another 264. With runners from New York to Chicago to Detroit preparing to toe the start line again this year, some of the same fears — could it happen again? — that arose after 9/11 have lingered in the world of long-distance running.

Yet it hasn’t discouraged anyone from signing up. Nearly 36,000 people will run from the start line in Hopkinton, Mass. through the streets of Boston and right down Boylston Street next week. That’s 9,000 more than last year. And 50,266 runners poured through the streets of New York last November — the biggest marathon in world history — just seven months after the Boston bombings.

“The runners are not being stopped,” Bill Rodgers, an American running legend who won the Boston and New York marathon four times each between 1975 and 1980, told me. “You don’t shut down marathons.”

In the same way that airport security changed after 9/11, the nation’s biggest footraces reevaluated their security measures after Boston. There are the simple things runners see: Clear plastic bags provided for use instead of backpacks, longer lines to get to the start line or to meet your family after the finish. Then there are the heightened security measures runners and spectators don’t see: Plainclothes officers, extra bomb-sniffing dogs, and whatever else race directors and security officials won’t tell the press.

Boston intends to have more than 3,500 police officers at this year’s marathon, the 118th running of the race, doubling last year’s number. Chris Weiller, vice president of media and public relations for New York Road Runners, told me the organization ran a “top-to-bottom audit” of its security measures after Boston — the same sort of audit it did on marathon security after 9/11.

“As far as how it’s changed our races?” said Weiller, whose organization puts on the New York City Marathon. “Did it take a runners a little bit longer to get through the finish area to egress in a certain way that they couldn’t in years before? Maybe so. Did they have to come up with a different spot to meet their family members because certain areas were cordoned off? Sure.”

So marathons have tightened up security at the start and finish lines. What about the rest of the course that stretches to every corner of every major U.S. city? How do you secure 26.2 miles of public space?

“A marathon is unique because it’s a citywide party,” said Michael O’Neil, president of MSA security and a 22-year veteran of the New York City Police Department, where he was commanding officer of the city’s counterterrorism division from 2002 to 2007. “It’s a little easier, in a way, to create a physical security plan around something that has an identified structure to it, like a playoff baseball game.”

If you can’t have cops on every inch of the course, is it possible to ensure the marathon and its spectators stay safe?

“Can you completely eliminate risk?” O’Neil said. “No, but we want to make it much harder. So that means everything from better explosive detection to the security you see and the security you don’t see, like plainclothes officers looking at people in the crowd. The NYPD is very good at identifying risky behavior in a crowd. They’ve been doing it for years post-9/11.”

Directors for the Philadelphia, New York City, Chicago and Boston Marathons refused to talk about how much, exactly, the security price tag is for an event of this magnitude. (Weiller said additional security measures “haven’t had a direct impact on races fees.” O’Neil said he couldn’t approximate the cost other than to say, “I’m sure it’s not cheap.”) But after the Pittsburgh Marathon’s director expressed fears that it couldn’t afford heightened security measures in the wake of the Boston bombings, it received a $75,000 federal grant to help cover costs. Weiller said New York Road Runners spent about $1 million alone on analysis and instituting new policies last year.

I’ve run two big-city road races since Boston — the Brooklyn Half Marathon and Twin Cities Marathon — and I can say, at least anecdotally, that security was tighter than in races I had run before Boston. But the race itself? No different: Still 26.2 miles, still a miserable slog to the finish line, still screaming spectators lining the course. Runners simply have to get used to the new rules, the same way air travelers have to remove their belts and shoes for the TSA. Marathon security has changed, but the marathon itself is still an expensive excuse to run 26.2 miles on closed city streets.

Should retooled security measures give runners and city dwellers any solace? “Look, it’s not a lost cause,” O’Neil said. “You want to make it harder for bad guys to potentially operate in this environment. But we don’t want to create it where it’s so bad you don’t even want to run in the marathon anymore, or nobody wants to come out and see it. There’s a positive part of what happened in Boston — and I know that sounds crazy — but it raised the level of awareness for this type of threat at an event like this. And cities are capable of putting in place strong security measures to mitigate risk.”