Book-less, But That’s the Point – Next City

Book-less, But That’s the Point 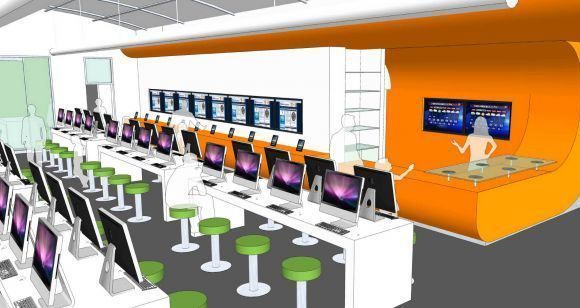 A new library in San Antonio, Texas plans to offer many services found in a typical library, except one quintessential characteristic: books.

That is, physical books. The proposed book-less library is a response to the rising popularity of e-readers and an increased demand for public Internet access.

It will be part of a soon-to-launch book-less public library system called BiblioTech. The initial branch will open in South Side, a predominantly Latino neighborhood of San Antonio, and contain 50 computer terminals as well as laptops and tablets. It will also offer preloaded e-readers that library card holders can take home for two-week rentals.

According to the San Antonio Express, the intention behind the book-less library is to give residents reading and learning opportunities that are low-cost, efficient and better utilize technology.

If San Antonio’s experiment is successful, it could offer a cost-effective model for providing modern library services in other communities.

Due to decreased municipal budgets, many cities are either closing or limiting hours of operation for public libraries. As City Limits reported this month, New York City Public libraries have cut back on hours despite an increase in attendance.

School districts across the country are closing school libraries in an attempt to save money. With less schools with libraries, communities become even more dependent on their local public library.

But libraries no longer contain only books. Today they provide necessary education and technology skills training to the communities that need them most. For example, the New York Public Library system offers free classes on everything from English to résumé writing to how to conduct an online job search. (According to a report by the Federal Communications Commission, over 80 percent of Fortune 500 companies, including Target and Walmart, post jobs online only and require applications to be submitted online.)

These services are important in places like the Bronx, where just under 40 percent of residents have home broadband access.

According to a report by the National Telecommunications & Information Administration, nearly one in four Americans do not have a computer at home. One in three do not have home access to the Internet.

The report also found a strong correlation between income and Internet access. The Department of Commerce reported that four out of 10 households that earn less than $25,000 have Internet access at home. Because of a lack of competition and access to broadband infrastructure, Internet access is simply too expensive for millions of Americans.

In an attempt to address lack of Internet access, over the summer President Obama issued an executive order that removes obstacles to building broadband infrastructure on federally owned property. The goal of the executive order is to expand broadband access while in turn making broadband Internet more affordable.

Despite the feds taking steps to make the Internet more affordable, it could be years until poor urban and rural communities have full access to broadband services. San Antonio’s experiment may cover some ground in the meantime.