Blight-Fighters Go at Memphis Decay From All Angles 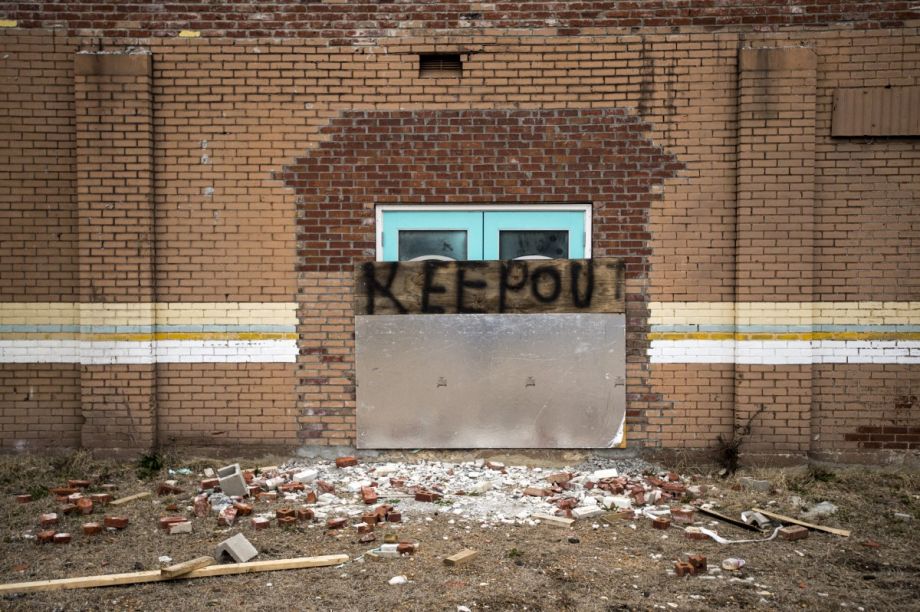 Three doors down, a leaf blower whines in the cool of a clear January afternoon.

Its operator wears an orange bandana over his mouth and nose to keep out the dust and leaves that billow around his stocky frame and the trim, neat single-story cottage the man apparently calls home. White bags stuffed with leaves are stacked in a row near the edge of the lawn, now trim and neat enough to match the house.

But that’s three doors down. Here, hardy, dark winter grasses sprout through the broken sidewalk and stand tall enough on the lawn to mostly obscure a weathered, black-gray tire wilted to its steel belts.

Paper, plastic bottles and beer cans hide like Easter eggs around the crumbling porch. White paint flakes from ancient clapboards drooping together under a pair of broken windows. The front door stands wide open in a way that would be welcoming if it weren’t ominous.

This is blight in Memphis. Pockets of urban decay fester like bad teeth in some otherwise healthy — some say even dynamic — areas. Some pockets are big, of course, sometimes covering streets or blocks. Some are smaller, narrowed to one lot.

Blight takes all forms in Memphis. City code defines blight as “property which is unsecured, left open to the elements, and without apparent and latent supervision by the owner.” That definition also offers that blighted properties are usually in disrepair, usually occupied by vagrants, are littered, and have broken windows, and that the value of property “would be greater if the building were removed.” That is, this place would be better off without you.

Brandon Gaitor knows that blight in Memphis is in the eye of the beholder.

“It’s one of those things, and not to be vulgar, but it’s like pornography,” Gaitor said. “It’s hard to describe it but you know it when you see it.”

Gaitor should know. Officially, he’s the special projects manager for Neighborhood Preservation, Inc. (NPI). The nonprofit group was founded in 2012 by a group of the city’s economic and community development leaders to help clean up the city and is directed by the law firm, Brewer & Barlow PLC. Unofficially, Gaitor is one of the city’s most doggedly determined blight fighters.

But he’s far from alone in his fight.

Roshun Austin is the executive director of The Works, which works to rebuild, restore and renew the South Memphis neighborhood. Noise and behavior figure into Austin’s definition of blight in the neighborhood bordered by Interstates 240 and 55.

Austin said South Memphis neighbors already have more pride about their home after South Side Park was cleaned up recently. Cleaning up the rest of South Memphis, she said, could stabilize this once-thriving, now-dwindling part of the city.

A few miles from South Memphis and above the manicured walks and friendly fountains of Civic Center Plaza in Downtown Memphis, blight shows up on the desk of Shelby County Trustee David Lenoir.

His tax rolls are filled with those decayed pockets of unproductive properties that don’t yield taxes and drag down property values (and, thus, tax revenues) of the properties around them.

Since simple vacancy is the leading cause of blight, consider that in the Memphis city limits, there are more than 53,000 vacant properties.

As far as longtime vacancy, Lenoir has said there are more than 35,000 parcels of land in the county for which no one has paid any taxes in the last three to four years. That is roughly 9 percent of the total 340,000 parcels in the entire county.

“Clearly there are other social and community issues related to blight, but purely from an economic perspective, there’s no doubt it is a drain on our resources,” Lenoir said. “We pay higher taxes across the county because of the blight in our community. The property value impact that it has on surrounding properties has a direct impact on our county revenues.”

Lenoir calls blight “a cancer” and said if it could be removed, the areas around it would be healthier.

Gaitor called blight Shelby County’s “common enemy” and noted that citizens need to fight the war together. First, however, they’ll have to take its threat seriously. To do that, he said, they need to grasp the scale of the problem.