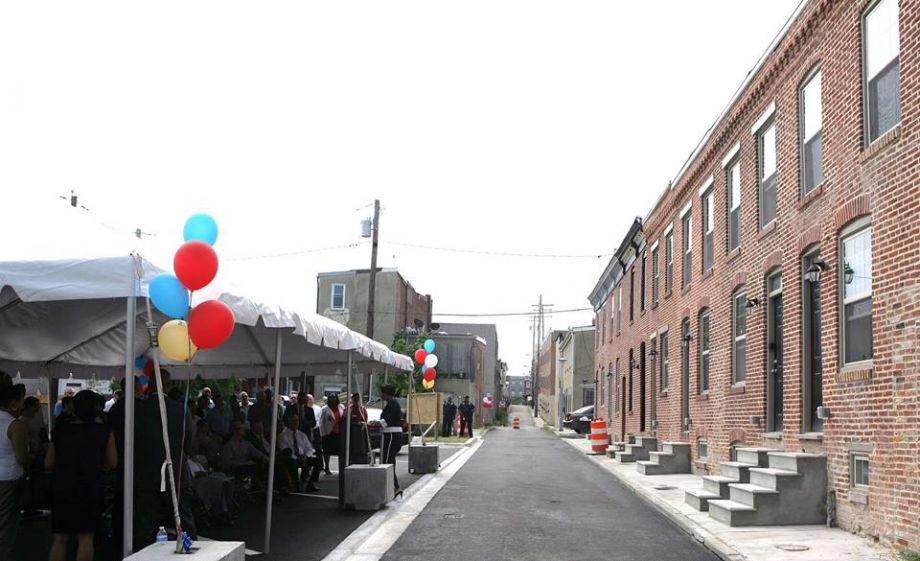 Duncan Street “alley houses” in Baltimore at a celebration of their completion last year. The tent is set up where the parking spaces are. (Credit: Southeast CDC)

Even as racial segregation in American cities has declined modestly, economic segregation continues to widen, including in Baltimore, a city known for ranking high on both measures of inequality. Of the country’s largest metro areas — those with 1 million people or more — Baltimore ranks ninth in economic segregation, according to the Martin Prosperity Institute.

But there was a time when not only was Baltimore less segregated, but the city’s housing was actually designed for integration. Many blocks had a narrow alley street running through them. So while large stately rowhouses marched around the exterior of the block, smaller, narrower houses could flank the alley on the interior. At the time most were built in the late 1800s, and wealthier German families lived on the main streets, while Czech and Polish families lived in the interiors. They’re on average 12 feet wide, 1,000 square feet total, with four rooms: two on the ground floor, two on the second.

Mary Ellen Hayward, an architectural historian and preservation consultant who wrote a book about the alley houses, says at the time they were built they were critical, since nearly everyone needed to walk to work. Almost every block of the city south of North Avenue had them. “I was always enthusiastic about [the alley houses] because they really serve an important purpose,” she says, “to provide inexpensive housing to buy or rent for low-income people. That’s what they were designed to do.”

Today, much of Baltimore remains a segregated city and a soft housing market. The city maintains a list of over 17,000 vacant buildings, and many say that’s an undercount, citing numbers as high as 30,000. It’s a situation that doesn’t bode well for the alley houses, many of which are shuttered: Why would a developer spend the money rehabbing such small properties when a buyer can still find a townhome for less than $30,000?

But in one neighborhood where the housing and job market is strengthening, Southeast CDC has redeveloped an entire row of alley houses, which it showed off during the Reclaiming Vacant Properties conference in Baltimore last month. The project, Duncan Square, was a pilot of sorts for the cities’ Vacants to Value program, which aims to tear down abandoned buildings in heavily blighted neighborhoods, and enforce code and attract developers in neighborhoods where the market is emerging.

That squares with the goals of Southeast CDC, too. “We work around the edges of the real estate market,” says Southeast CDC Executive Director Chris Ryer. “We don’t work in very successful areas or the highly distressed areas. We work in that area in between.”

Duncan Street, just a few blocks from Johns Hopkins Hospital, the city’s biggest employer, fits the bill. As far as Ryer was aware, Southeast CDC had never worked on alley houses before. “They’re small and you have to spend a lot of money doing the gut rehab without getting a very large property done,” he says.

But Duncan Street had a unique advantage. Many of the alley streets — though not all, says Hayward — are too narrow for street parking. The alley houses on one side of Duncan had already been demolished, though. Ryer says for years Southeast CDC had developed affordable housing in neighborhoods that weren’t stabilizing fast enough, so they ended up creating higher-value houses in struggling places. “We discovered over the years it wasn’t a great idea,” he says. “We’re now focusing more on quality of life improvements.”

Baltimore Housing got the transportation department to repave Duncan street and add seven angle-in parking spaces where the demolished row of houses had been. A private developer bought and rehabbed the homes, but because the city created the parking, they’re public spots. The state, which has been pushing an aggressive stormwater management policy, contributed funding for a rain garden to offset the new impervious surface created by the new parking.

The rehabs were finished last year. As of now, about half have sold, between about $170,00 and $210,000, depending on whether there’s a basement and small differences in size. Ryer says he expects all will sell. “So it’s going to be successful from that aspect, but whether it’s a successful pilot project, I don’t know,” he says. “We got 200 of these blocks all around Baltimore city and none are competitive. How do we make them competitive?”

Other blocks that still have housing on both sides of the alley may be too narrow for parking, and unattractive without it. And Ryer wonders if it’s worth the cost of demolition and repaving to replicate what was done on Duncan Street. Asked if Duncan Street was a unique circumstance, or whether it could be a model for other streets with alley houses, Baltimore Housing emailed a vague answer.

“We are looking to replicate this model where it is possible to build off of nascent market strength, and where we can form partnerships with for-profit and non-profit actors (like Southeast CDC) to ensure that the City’s investments will produce green outcomes where demolition is necessary and at the same time leverage the rehabilitation of the remaining vacant buildings,” wrote the director of communications.

On the block just south of Duncan Square, houses on both sides of the alley have been demolished. Ryer says another effective model for spots like this could be suburban-style townhouses elevated above a garage. The issue for developers is the extreme narrowness of the lots. The original houses were about 12 feet wide, and developers want to replace them with houses about 16 feet wide, but that would require replacing all of the sewer and water lines. If the city were willing to subsidize that, Ryer says developers he’s talked to might be interested.

Demand would still need to be higher. “The market’s not there for that product yet, but it might be a future solution for alley houses in certain markets,” Ryer says.

Hayward would prefer to see them saved. She actually helped her daughter buy an alley house in south Baltimore while she was studying to be a nurse practitioner at Hopkins. With more young people moving into cities, Ryer sees the small houses as alternatives to one-bedroom apartments. Whether they can bring back a measure of economic integration to strong market neighbors, “I’m sort of surprised it worked as well as it did [in the 1800 and 1900s],” says Hayward. “But I guess in a way people had no choice.”