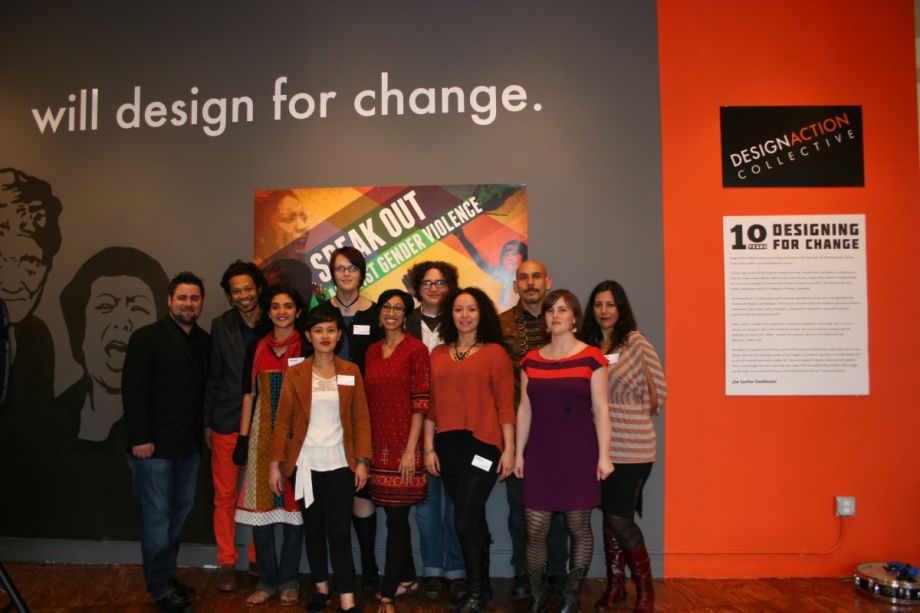 Long before #BlackLivesMatter was a trending hashtag, movement founders Patrisse Cullors, Opal Tometi and Alicia Garza had been part of a broader ecosystem of activists and organizers working on related issues for decades. That ecosystem includes Design Action Collective, a worker-owned graphic design and website development firm based in Oakland.

“Different members of Design Action have known or worked with Patrice, Alicia and Opal in different previous capacities, so that’s how they came into the shop,” says Sabiha Basrai, a graphic designer and member at Design Action.

Design Action has since done a bunch of work for the founding trio and others in the Black Lives Matter movement. They designed the recognizable yellow and black logo and signs, the Ferguson Action website and the Movement for Black Lives website.

Design Action got started in 2002 as a spin-off from the Inkworks Press Collective, a worker-owned print shop in Berkeley, California. Inkworks got started in 1974, when a bunch of progressive activists had trouble getting their materials printed and also desired a printing company that shared their values of non-exploitation and anti-oppression. Two Inkworks members, Innosanto Nagara and Kym Thomas, realized the changing needs of progressive activists, and that those needs could not fit well into Inkwell’s existing workflow, so they spun off Design Action as a sister organization. (Inkworks, unfortunately, closed down in February.)

“We see the worker co-op model as a way to integrate the values we have as activists into the way we work with one another,” says Basrai, who has been with Design Action for 10 years.

Today there are a dozen current Design Action members (and five former members, including one of the co-founders). Every member gets the same wage, and in years they earn a profit, known as a “patronage” internally to cooperatives, they distribute it based on amount of hours worked in that year. From the start, the intention was that all members would have access to healthcare, paid sick leave, family leave, paid vacations and paid holidays. They weren’t able to provide all those benefits all at once to start, but prioritized healthcare and sick leave. They now offer all these benefits to members. Additionally, they just wrote a policy for sabbaticals so that members who have been at Design Action for a certain number of years can consider taking a chunk of time off to pursue other interests.

Despite having no formal managers, they’re also unionized. It’s an important way to hold themselves accountable to union standards, as well as an expression of solidarity with unionized labor, Basrai says. “Working with a lot of unions, they tend to want to work with union shops too,” she adds.

There is no buy-in to become a worker-owner. “That’s a way we try to make ownership accessible,” Basrai says.

Instead, there is a nine-month candidacy period, with several evaluation points along the way. Candidates are given the same hourly wage as everyone else, and are part of the union, but don’t have full ownership rights such as voting on new work or other strategic business decisions. Each candidate gets a buddy, a current full member who orients them, answers questions, supports them and advocates on their behalf to other members. At the end of the period, members vote to have the person join the cooperative.

“The nine-month period has generally been enough time to clarify any questions or concerns and for all parties to feel confident in making the decision to be co-owners of a business,” Basrai explains.

They also began an apprenticeship program for people who might have some relevant skills in graphic design or website development but little professional experience. Apprentices get paid a slightly lower starting wage, in a temporary phase, while they are receiving training from members. The apprenticeship dovetails with the candidacy period, Basrai says, with the expectation after training and candidacy they’ll become full members. Apprenticeships last for about 12 months instead of nine for candidates. Three apprentices have come through so far; all became full members.

Design Action’s clients have typically come through organizations or people the group knows from their other lives embedded in movements around the country, or word of mouth from those networks. Like many graphic design and web development firms, some of the work they do is pro-bono, but they balance things out by charging on a sliding scale based on political urgency, size and reputation of the organization and other factors. Design Action holds weekly meetings to go over requests for work and current project loads.

“We strive for fairness on making sure we’re equally distributing work and also getting to work on stuff we’re excited to work on,” Basrai says. In taking on new work, new clients or new members, they strive for consensus on all decisions, making sure all concerns get heard.

Design Action is a majority women- and people-of-color-owned shop. “That’s been really important to us to grow our shop with folks who are underrepresented in our industry, graphic design and now also technology,” Basrai says. Website development is the most recent expansion to their work, with a special emphasis on web security, given that many view their clients’ work as controversial.

About half their work still consists of posters, brochures, annual reports and other publications for the nonprofits, foundations, other organizations and also some small local businesses that make up most of their client base. In any given week, Basrai says she has about a dozen open projects, which is about typical for everyone at the cooperative. Members commit to regular Monday to Friday, 9 to 5 work hours.

When Design Action wanted to expand into a new office space in late 2013, it was a rare moment when they needed some capital, to help renovate and build out their new space. For that, they went to another cooperative, Shared Capital Cooperative, a Minneapolis-based community development financial institution (CDFI).

“We talk to other cooperatives about how they do things like figuring out startup capital, financial planning and other questions,” Basrai says.

“Design Action members have had the great opportunity to collaborate with racial justice organizers and other movement organizers in different capacities over the years both inside and outside our work as designers and developers,” she adds. “So when a political moment like Black Lives Matter emerges, we are ready and able to respond with media tools.”