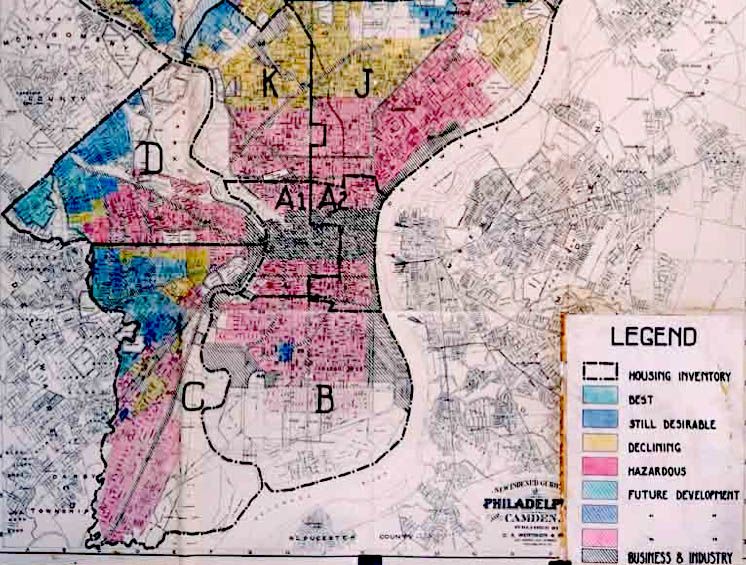 A 1936 map showing the redlining of neighborhoods in Philadelphia. Modern-day segregation manifests not in overt policy but in economic barriers.

The days of overt redlining — that nasty practice of corralling people of different races and ethnicities into different parts of a city — may be over, but evidence of de facto, neighborhood-based segregation persists everywhere you look. A number of maps showing the racial makeup of Chicago, Philadelphia and dozens of other U.S. cities portray our urban areas as divided along neat racial boundaries.

When juxtaposed with other maps showing class indicators such as income level and educational attainment, you begin to get a picture of the economic forces that keep city populations separated by race. And here’s an interesting stat: Blacks and Latinos are almost 30 percent less likely than whites to own a house. A study in last September’s issue of the Urban Affairs Review found a connection between homeownership, mobility and personal investment in a given neighborhood.

Now, researchers have found another economic barrier to minorities who want to buy a house: Blacks and Latinos pay an average of 3.5 percent more for homes than whites, according to a National Bureau of Economic Research report that was re-released this month.

Looking at more than 2 million home sales between the years 1990 and 2008, the report found that blacks and Latinos paid anywhere from 1 to 5 percent more than their white counterparts. These were for homes of comparable quality and within the same neighborhoods in four major metropolitan areas: Chicago, Baltimore-Washington, D.C., San Francisco and Los Angeles.

According to the report, a minority family’s income, wealth and access to credit had little to do with the higher prices they paid for homes. And outright racism on the part of sellers didn’t play the obvious role that one might think.

“Interestingly, we did not detect a pattern of obvious racial prejudice on the part of sellers,” Patrick Bayer, a professor of economics at Duke University and co-author of the report, says in an accompanying video. “Black and Hispanic sellers also sold at a similar premium as white sellers.”

Instead, the racial disadvantage in homebuying appears seeded in historical biases. The heretofore low homeownership rates among blacks and Latinos could be having a lingering effect, leading to a catch-22 that prevents first-time homeowners from landing a fair price, even when purchasing from people of the same race.

The report explains this conundrum in detail:

As the authors elucidate in the study’s conclusion, the added costs that minority homebuyers face can affect where they decide to move, encouraging them to keep to neighborhoods with lower prices (or choosing to rent instead), thereby perpetuating racial segregation.