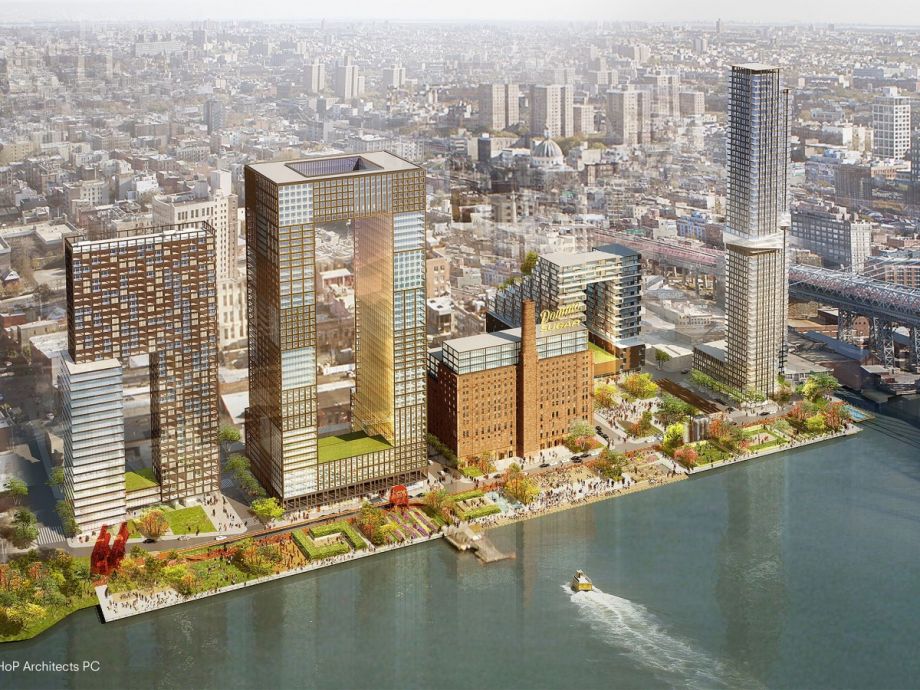 For months after his election, the press speculated about how New York City Mayor Bill de Blasio would act toward the real estate industry. Would be live up to his tough-on-developers rhetoric, or take a more conciliatory approach? Three weeks after finalizing his housing team, de Blasio has made his first move, and it’s definitely in the direction of toughness.

The latest plan to redevelop the old Domino Sugar refinery on the Williamsburg waterfront is (or was) a rare example of an uncontroversial skyscraper project in Brooklyn. Two Trees Management, the site’s developer, is a favorite of Brooklyn, with founder David Walentas having single-handedly revived Dumbo, a former industrial district under the Manhattan Bridge. His son, Jed, proposed building 2,284 apartments — nearly 30 percent of which would be affordable, more than the city usually gets out of projects on privately owned land — and renovating the old brick factory into modern office space, along with more in another building.

The office space — 630,000 square feet, a small skyscraper’s worth — was especially attractive to the local community board. The prospect of space for between 3,000 and 4,000 workers was impressive for an industrial site that had employed at most 400 when it was shuttered in 2004. The added park space was also a big draw, as Walentas proposed opening up much more waterfront space to the public than had the developers who previously owned the site. The old project included a lot of second-story retail space that probably would have been turned into some sort of chain store, while the Walentases promised to lease only the ground floor to retail, and even then only to smaller, more independent tenants. It sounded consistent with what they’ve done in Dumbo, foregoing higher rents to maintain a certain vibe.

The project was almost certain to sail on through the normally contentious political process, achieving a consensus approval impressive for a project of its size. The extra height and density seemed like a good deal for the park and office space that the community would get in return. The borough president said yes, the community board said yes and the Landmarks Preservation commission said yes. Steve Levin, the local city councilmember, seemed to go along with it for the sake of the affordable housing, and Churches United for Fair Housing, an advocacy group in Williamsburg, said, “We think that it is as close as we can get to responsible development in our neighborhood.”

But now, de Blasio is saying no:

At the meetings this week, the city officials laid out their demands, asking Mr. Walentas to dedicate more space — 50,000 square feet, the equivalent of about 60 apartments — for affordable housing, in exchange for allowing him to build taller towers. But the developer argued that if he did that he would have fewer market-rate apartments, whose profitability makes the park, the affordable housing and a school possible.

Herein lies the boldness in de Blasio’s move: Two Trees is legally entitled to build the old developer’s plan anyway. The site had already gone through public review with its previous owners, who had intended to develop it with much less office space and more retail and parking. In fact, due to the naïve nature of some of the early Brooklyn development arrangements, the old developer’s promise of 660 affordable housing units — the number Two Trees is now offering — was not actually binding, and the developer can technically get away with building only 440.

De Blasio has chosen a high-stakes target for his first move on housing. As Jed Walentas told the New York Times, “I’d very much like to work this out with them, but what they’re currently asking for is not workable.” He threatened to revert back to the old plan, dropping the desired office and park space and perhaps even putting some of the affordable housing in jeopardy. (Given Two Trees’ need to maintain good relations with the city for the sake of its long-term investments, however, this seems unlikely.)

The threat seems to have spooked even Churches United for Fair Housing. The group’s executive director, Rob Solano, told the Times that while he welcomed the administration’s aggressiveness on affordable housing, “It’s a delicate balance between pushing as hard as you can and a break. If we get to the point where nothing is built, or there are more delays, that’s another day without affordable housing.”

The real estate industry and affordable housing activists will be watching this fight, which the city council will ultimately decide, very closely. De Blasio has shown himself to be a vociferous negotiator with Gov. Andrew Cuomo over his proposed high-earner income tax to pay for university pre-kindergarten, refusing to accept the governor’s draw of pre-K but no tax. We’ll soon find out if he’s going to play as hard with the real estate industry. Walentas would probably agree to some concessions, but how hard will — or can — the mayor push him for the 50,000 extra square feet of affordable housing?