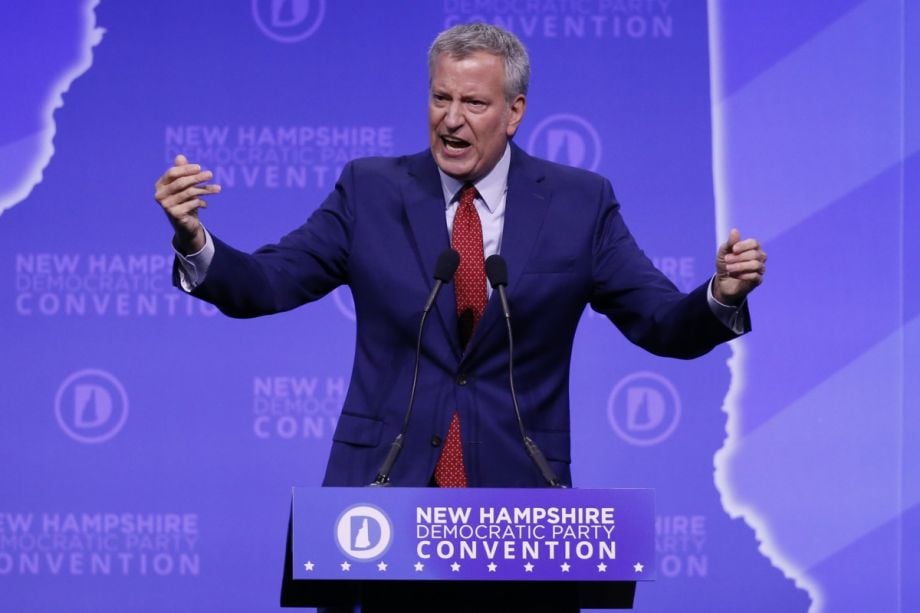 New York City mayor and presidential hopeful Bill de Blasio is leaning on his experience running the biggest city in the U.S. to explain why he’s qualified to be president. But so far, reports New York Patch, Hizzoner is failing in one major area: reducing income inequality.

Though de Blasio promised to take “dead aim” at income inequality in his inauguration speech, the city’s “Gini coefficient,” a measure of income inequality used by the U.S. census bureau, is essentially flat — even up a tiny amount since he took office, Patch notes.

New York City’s Gini coefficient was 0.5504 in 2017, the most recent year for which data is available, according to a report by the Manhattan Institute, a conservative think tank. A score of 0 would mean that all income is evenly distributed; a score of 1 would mean one person has all the money. The U.S. average Gini coefficient is 0.4815.

A de Blasio spokesperson told Patch that the Gini coefficient is too slow-moving to show that the number of people in poverty in the city has fallen by 236,500 since 2013 and does not reflect the mayor’s work on universal pre-K, affordable housing, and paid sick leave.

Even for Americans who have insurance, there’s a very real possibility that they will be hit with a surprise cost — often when they accidentally receive specialist care or lab work from an out-of-network provider.

A new analysis from Kaiser Health News finds that a number of these surprise bills are being driven by private equity firms, who own and operate many physician staffing companies and who refuse to participate in insurance networks.

“We’ve started to realize it’s not us versus the hospitals or the doctors, it’s us versus the hedge funds,” James Gelfand, senior vice president of health policy at ERIC, a group that represents large employers, told Kaiser.

Physician staffing companies fill in gaps created by doctor shortages and an aging population, by providing doctors and medical staff to run dialysis clinics, staff emergency rooms and even operate entire doctors’ offices. The two largest staffing companies, which together make up 30 percent of the market, are both owned by private equity firms.

The Coalition Against Surprise Medical Billing, made up of employers and big insurers, wants to end the practice of balance billing in situations where a patient doesn’t realize they’re going out of network. Balance billing is when a provider charges the difference between the cost of a service and what an insurer pays. In an out-of-network situation, the insurer may pay nothing, making the patient responsible for the entire bill.

On the other side of the debate are groups such as Physicians for Fair Coverage and Doctor Patient Unity, which Kaiser says are made up of physician staffing firms owned by private equity firms. These deep-pocketed groups are spending heavily on lobbying.

“There’s no way we can match them,” said Gelfand, from ERIC. “We’re entering this debate knowing we’re being horrifically outspent.”

Researchers asked a nationally representative sample of adults to estimate the wealth gap between white and black Americans over time. “If the average white American has $100 in 1963, how much does the average black American have?” they asked, repeating the question for 11 more time points between 1963 and 2018, in random order.

Their responses show that Americans hold two erroneous beliefs about the wealth gap. In a new paper, researchers Michael Kraus and coauthors show that most Americans believe the wealth gap is significantly smaller than it is, and that it is steadily decreasing over time (such that the average respondent said that the wealth gap in 2016 was only a few percentage points). In reality, the wealth gap between black and white households in America is essentially unchanged, with the median white family having 7 times more wealth than the median black family.

People of color were generally more accurate in their predictions, Kraus said on Twitter; as were people who were more financially literate.

In a FAQ that accompanied the research, the authors note that the data does not mean that society has made no progress in 50 years — it’s just not progress related to economic equity. “The computing power in individual cell phones surpasses the entire computing power of the moon landings for instance,” they write. “We are arguing that a certain kind of progress — toward a more just society — is not as easy, natural, or as automatic as we might want to believe. And seeing progress in domains where it is not warranted can actually prevent the pursuit of justice.”