Bike-Share May Roll Into New Haven – Next City

Bike-Share May Roll Into New Haven 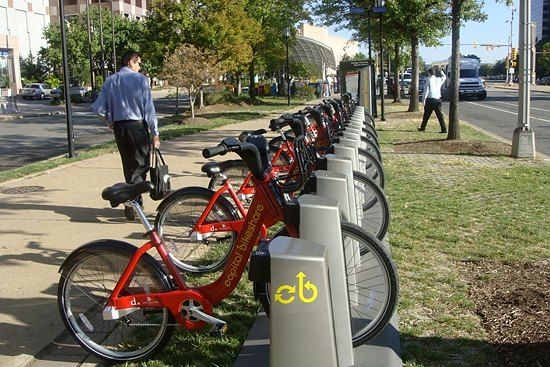 Capital Bikeshare in Washington, D.C. If awarded a $400,000 grant, New Haven may get 10 such stations. Credit: Mario Roberto Duran Ortiz

This post is an excerpt of a longer piece that originally appeared on the New haven Independent.

Stepping off the train at New Haven’s Union Station, Joe Commuter checks a two-wheeler out of the nearby bike share rack and pedals to work at Science Park. He parks it there. When his co-worker heads out for her midday meal, she pulls the bike off the rack and wheels into town, where another bike share station is waiting outside her favorite restaurant.

That’s one vision of what a new bike sharing program in the Connecticut city might look like. It may come to pass if a grant application submitted earlier this year by traffic czar Jim Travers finds favor with the South Central Regional Council of Governments.

Travers has applied for $400,000 to pay for a starter course of 10 bike-share stations to be installed around New Haven. Each station would have a number of bikes available for short-term borrowing for a fee.

Popular in Europe, bike share programs are beginning to take root in the U.S. Boston,Chicago and Washington D.C. each have one. New York City plans to roll one out this year.

Travers called bike-sharing a way to help reduce car congestion in town by encouraging more people to use bikes for short trips around town. It gives people more ways to move around town, he said. “It’s all about options.”

The $400,000 grant application is one of four that Travers submitted earlier this year. The others are for updating traffic signals and looking into converting one-way streets to two-way.

If the city receives the $400,000 grant, Travers said, he would like to partner with local hospitals and universities that might install still more bike share stations on their campuses. For instance, Yale might install a few racks among its dorms and facilities. Southern Connecticut State University might have a rack for students to get into town.

The system would work a lot like ZipCar, the car sharing service, Travers said. In D.C., people join Capital Bikeshare for a day, three days, a month or a year. Use of any of the city’s over 1,200 bikes is free for rides of under 30 minutes, with increasing fees for longer rides.

Travers said the details of how the system would work here have not been worked out. The city would put out a Request For Proposals to find a company to install and run the system. One option could be Portland-based Alta Bicycle Share, which operates the D.C. program and will run New York’s. Alta has partnered with Bixi, the largest bike share operator in the world.

Travers said bike-share systems avoid the threat of bike theft by using custom parts that can’t be used on other bikes. There’s no incentive to strip the bikes. “The bikes tend not to get stolen,” Travers said.

Another theft deterrent: The bikes are not exactly hip-looking. “It’s like a sensible shoe.”

The city would have no operating costs year to year, Travers said. “The system ultimately would pay for itself.”

Riders would have to supply their own helmets. They aren’t required by law if you’re over 12, but Travers said he hopes people would use them anyway. “We’d have to look into that,” Travers said. “I’m a huge proponent of people wearing a bike helmet.”

Travers said he’s confident that the system could work here. The city of Providence — which is comparable to New Haven in size, Travers said — has studied bike sharing and determined it to be feasible. It’s working in D.C. and elsewhere. “Enough people have proven this model to be effective. We are confident the cycling community in New Haven supports it.”

Travers said he should know by late summer if the city will get the $400,000 grant.