Bed-Stuy Is Going From Low Ridership to Bike-Share Boom 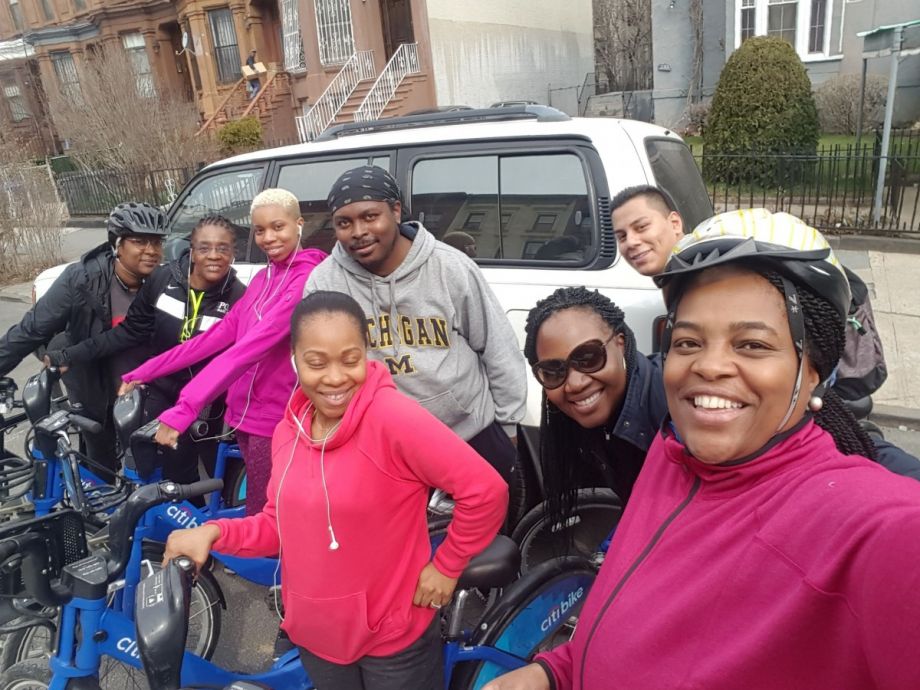 When Citi Bike rolled out across New York City in 2013, its eastern edge was Brooklyn’s Bedford-Stuyvesant, one of the city’s poorest neighborhoods and one where home values are increasing at some of the fastest rates in the United States. On the western side of the neighborhood, where the first wave of the system’s bike-share stations appeared, home values have nearly tripled since 2005.

But the stations didn’t reach the neighborhood’s east and north areas, where five large and several smaller public housing complexes are located. They didn’t extend south to Crown Heights, a predominantly black neighborhood experiencing rising rents and rapid displacement, or southeast to Brownsville or East New York, neighborhoods with high concentrations of poverty and public housing. So while New York City Housing Authority (NYCHA) public housing residents were entitled to discounted memberships from bike-share’s launch in NYC, and while the neighborhood has high rates of diet- and activity-related diseases, and while the city’s DOT had worked with community development organization Bedford Stuyvesant Restoration on choosing sites for the first stations, ridership in Bed-Stuy remained well below the citywide average.

To many in the neighborhood, the bikes, and all the health and transportation benefits they represented, were harbingers of gentrification, and not intended for the long-standing communities of color where they were placed.

Four years later, bike-share is seeing growth in Bed-Stuy. In 2016, the number of Citi Bike rides and memberships increased faster there than in the city as a whole. The number of NYCHA residents with memberships increased faster in Brooklyn than citywide, and faster still in Bed-Stuy. According to a new report by Restoration, a Brooklyn-based community development organization, and the National Association of City Transportation Officials, Bed-Stuy saw 225 percent more Citi Bike trips in June 2016 than in June 2015.

What changed? Expansions in 2015 and 2016 increased the number of stations and bikes in Bed-Stuy (though not in Crown Heights, or East New York, or Brownsville), especially near the public housing on the northern end. But more than that, Restoration dedicated itself to a three-year mission of changing the culture and conversation about bike-share.

“We knew that [Citi Bike] wasn’t necessarily received widely,” says Tracey Capers, Restoration’s executive vice president for programs. “We knew that it was pretty misunderstood, but what we thought was, wouldn’t it be powerful if we could use bike-share to change the neighborhood conversation and show how it could be a useful tool in supporting residents in achieving their goals.”

Goals like getting to work and school, increasing physical activity and, especially, bridging gaps in a transportation desert. The public housing on Bed-Stuy’s north side has spotty public transportation access, and all of Brooklyn suffers from poor north-to-south connections. A bike can shrink a 45-minute ride on a tangle of subway and bus lines from Sumner Houses in Bed-Stuy to the Prospect Park farmers market into a single, 22-minute ride.

But before Restoration could increase ridership, the organization had to find out why residents hadn’t signed up already. Restoration partnered with Citi Bike operator Motivate and the NYC Departments of Transportation and Health and Mental Hygiene to conduct a series of surveys, focus groups, and one-on-one stakeholder conversations.

Capers, herself a Citi Bike convert, says the latter was a barrier for her too. “I realized I personally had this perception that there weren’t a lot of people of color biking in Bed-Stuy and in Brooklyn,” she says. “People are more likely to be swayed or moved when they see themselves reflected in the issue or the project.”

So Restoration launched a series of events and marketing campaigns intended to broadcast the stories of riders of color and connect them with curious community members. These ambassadors led community rides from Bed-Stuy to other Brooklyn neighborhoods, wrote blog posts for Citi Bike’s website and were featured in Restoration’s #FreshMovesBKNY campaign. The ads touted the health benefits of biking, but also the material ones: an unlimited MetroCard costs $121 a month, compared to a Citi Bike membership of $163 a year. But for those eligible for discounted fares, an unlimited subway card is $60 a month — and Citi Bike membership is $60 a year.

Shaquana Boykin signed up for Citi Bike in the summer of 2015, when she learned that the Myrtle Avenue Revitalization Project (MARP), where she works, was eligible to purchase discounted memberships for employees. Until a Restoration meeting where she heard that, she hadn’t known about the NYCHA discount either. But she says cost was only a secondary concern.

“I just literally didn’t know what those bikes were in front of my building,” she says, referring to the public housing complex where she lives. “I never went up to the station or anything.”

When she worked at the Brooklyn Botanic Garden, all of her coworkers biked. But Boykin, a Bed-Stuy native, assumed that was the kind of thing people did if they’d grown up elsewhere. “Maybe people who don’t come from the city come to the city and they bike. I didn’t think about biking, I guess. You just do that when you’re young.”

Now, she says, “Oh my gosh, my whole life revolves around the bike-share system.” As the healthy communities program manager at MARP, the busy 26-year-old bikes between seven different sites in Fort Greene, including the Boys and Girls Club and Navy Yard, and uses Citi Bike to get to school and her internship as well. Since 2015, she’s gone down two pant sizes.

Boykin was featured in Restoration’s Citi Bike ads and says she’s stopped constantly by folks who see her riding and want to learn more. She’s happy to advocate; she really loves the service and that she doesn’t need to deal with the hassle of owning a bike of her own. But she wishes there were stations in more of the places she needs to go: Bay Ridge, Crown Heights, Coney Island, the vast expanse of southern Brooklyn currently blank on the Citi Bike map.

When people stop her, their biggest concern is usually safety. “Which is kind of a hard thing to grapple with, because how do you make everyone feel safe?” she asks. “And the only conclusion I’ve got is more bike lanes.” Boykin, who feels safest in a bike lane, admits to sometimes riding in the wrong direction if there’s only a bike lane on one side of the street.

“I think people are very much intimidated because of the amount of cars on the road but when they see that you can kind of share the road, then they become a little bit more comfortable,” says Kweli Campbell, a Bed-Stuy resident who led half a dozen community rides last year. A Citi Bike member since 2014, she joined after moving back to New York from New Jersey and realizing that in Brooklyn, a car was more of a hassle than an asset. She had already signed up before the Restoration efforts, and was contacted to serve as an ambassador.

Besides safety concerns, the people on her rides have expressed confusion about the pricing, and reflected the earlier distrust that Restoration is trying to overcome. “I think a lot of people feel like they weren’t involved [in the planning process],” says Campbell.

With her rides, Campbell is trying to show biking can be for everyone. She leads trips to Brooklyn destinations like Williamsburg, and draws an intergenerational crowd. “I’m seeing kids to older people wanting to ride. Even my mother!” she says. “I didn’t even know she knew how to ride a bike.”

The rides also allow Campbell to promote another, underappreciated benefit to biking: the ability to connect Brooklynites with burgeoning opportunities in their borough.

“When I was growing up in Brooklyn, I knew a lot of kids who never left their neighborhoods,” she says. “I think that’s one thing that the Citi bikes allow.” On one of her rides, she takes Bed-Stuy residents to the Prospect Park farmers market, for example. By bus, “It would be a whole day trip. It would take forever,” she says. “But on a bike it’s doable.”

Capers says, “For this really to take hold, to really break through for people of color and low-income neighborhoods, it really needs to be normalized. And it will be normalized when it’s in more neighborhoods.” Locations haven’t yet been finalized for the next post-2017 expansion; Restoration is working to advocate for sites now. They’re also expanding their approach to other neighborhoods, like Harlem and the Two Bridges area in lower Manhattan.

Capers thinks the model Restoration is following could bear fruit everywhere. By partnering with many different agencies and organizations, Restoration has been able to vastly expand its impact through mini-grants and joint programs. Some job training programs have signed up to offer a bike-share membership instead of a MetroCard. Woodhull and Interfaith Medical Centers, two major employers in the area, will offer discounted memberships to employees, and are also working with the health department on a program that would prescribe bike memberships to patients in need of more physical activity. Working to improve street conditions is also a priority; Capers hopes that as more community members start to ride, they’ll take up the mantle of bike advocacy as well.

“I’d never desired to be on a bike on New York City streets. Of all the things in my life I wanted to do, that’s not one of them,” she says. But in the last 10 months as a member, she’s made over 125 trips. “I realize my courage is growing every day.”