Have You Heard About That Awesome New Bike-Share Diet? – Next City

Have You Heard About That Awesome New Bike-Share Diet? 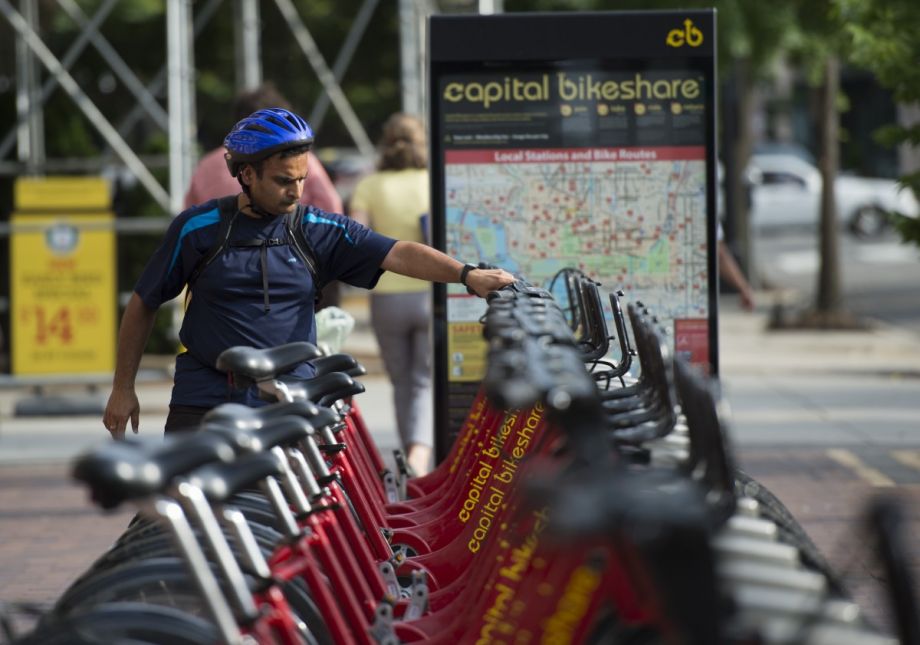 In a survey of 3,100 Capital Bikeshare users in Washington, D.C., 30 percent of riders indicated they lost weight thanks to the program. (AP Photo/Molly Riley)

For the last several years, bike-share has been the darling of U.S. bike advocates and city officials. It has been promoted as a boon to urban transportation that will help reduce congestion, normalize public perceptions of bicycling, improve health, bolster economies, reduce CO2 emissions, improve safety and more.

Though there is likely some truth in those claims, they are often backed up by anecdotal evidence rather than hard data. It’s a problem that has the potential to undermine bike-share’s explosive expansion if the purported benefits turn out to be less than promised.

“Bike-share attracts money … and it’s very popular so every city wants to have one to be cool,” says Miriam Ricci, a researcher at the University of the West of England’s Centre for Transport and Society. “I started to read lots of articles, academic papers and blogs about bike-sharing … and I was perplexed that there was a lot of hype and enthusiasm and lots of claims about CO2 savings and so on but very little or robust evidence to back it up.”

Ricci delved deeper into bike-share claims and evidence in the June issue of Research in Transportation Business and Management. For “Bike sharing: A review of evidence on impacts and processes of implementation and operation,” Ricci analyzed existing studies and surveys for evidence that supported claims that bike-share shifts people’s mode-share choices, creates new cyclists and diversifies cycling, has economic and health impacts, reduces congestion and single-occupancy vehicle use, and reduces carbon emissions. She also looked at the processes by which cities set up and operate bike-share systems.

It turns out that bike-share supporters aren’t grounded in hyperbole. Ricci found evidence that supported many of the claimed benefits including economic and health impact, new cyclist creation, and more. But there’s also a serious lack of proof that bike-sharing programs reduce congestion (in some cases, they may even increase congestion), get people out of their cars or help the environment.

One of the most common reasons cited for launching bike-share is to increase the number of bicyclists in a city. According to Ricci’s paper, a recent survey of London bike-share’s active users found that 78 percent started to ride or ride more as a result of the system. Similarly, 68.4 percent of sampled bike-share users in Dublin claimed, “not to have cycled for their current trip prior to the launch of Dublinbikes” and 63.4 say they purchased a private bicycle after using bike-share.

Ricci also found encouraging evidence that shows bike-share is good for user health, unsurprisingly. A study of Valencia University students commuting with the Valenbisi system found that they got half their recommended weekly exercise on the bikes and saw a small reduction of body mass index. In a survey of 3,100 Capital Bikeshare users in Washington, D.C., 31.5 percent reported stress reduction and about 30 percent indicated they lost weight as a result of bike-share.

Though evidence is limited, there are two studies showing that bike-share can benefit local economies to some extent. Academic research on Capital Bikeshare’s potential economic benefits found 23 percent of surveyed users spent more money because they used CaBi. Another study of Nice Ride Minnesota found that bike-share stations generated “an average of $1.29 per week, which would equate to U.S. $29,000 over the season April to November” for nearby businesses.

Part of the claim that bike-share will increase the number of cyclists is that it will help diversify ridership beyond the white, middle- to upper-class men who often dominate cycling’s demographics. Ricci did not find much supporting evidence. She writes that bike-share systems, “seem to attract a particular profile of user: male, white, employed and … younger, more affluent, more educated and more likely to be already engaged in cycling independently of bike-sharing.”

Congestion reduction is perhaps bike-share’s biggest selling point. If bike-share increases the number of cyclists and frequency with which they ride, it makes sense that it would reduce traffic congestion. But, Ricci found that bike-share users don’t bike instead of driving so much as they bike instead of taking transit or walking. She writes that, “although Dublinbikes users reported considerable behavioral change, the prevailing trend showed a large modal shift (80.2 percent) from sustainable modes of travel to the bicycle, particularly from walking (45.6 percent) and including transfer from bus (25.8 percent) and rail (8.8 percent).” Still, nearly 20 percent of Dublinbikes users say they now drive less. Other European and American cities saw far lower rates of mode shift. In London only 2 percent of users shifted away from cars. In Lyon, France, and Washington, D.C., it’s 7 percent.

Perhaps most surprising, Ricci says bike-share can actually contribute to congestion with the vans and trucks they use to redistribute bikes in the system. Those motorized fleets also harm bike-share’s environmental benefit. Ricci found zero evidence that bike-share leads to any significant reduction of carbon emissions.

Ricci says, “If you put bike-sharing together with policies that strongly discourage car ownership and promote active travel and quality transit then it can be part of that picture and can contribute to the solution. [But] in isolation it won’t solve the pressing problems of air pollution, congestion, climate change … .”

Despite some of the questionable claims, Ricci says, “Bike-sharing can indeed be a good thing for those who use it.”

But, she thinks her study is proof that bike-share is due for more robust research that will provide good data for bike-share supporters to use. It is perhaps unsurprising, given that a lack of good data on ridership and demographics is a problem that continues to plague bike advocacy in general.

Ricci writes, “A commitment to better, consistent and transparent monitoring and evaluation is necessary if bike-sharing is to be considered an effective element of sustainable urban mobility strategies.”

Until then, she thinks that bike-share supporters would be better off sticking to claims for which they have real evidence.

“Bike-sharing can be really good for some aspects, like improved accessibility, better journey experience, faster and cheaper travel. These should be the claims that promoters should focus on.”