Notes from a Grassroots Bike-Share Operator 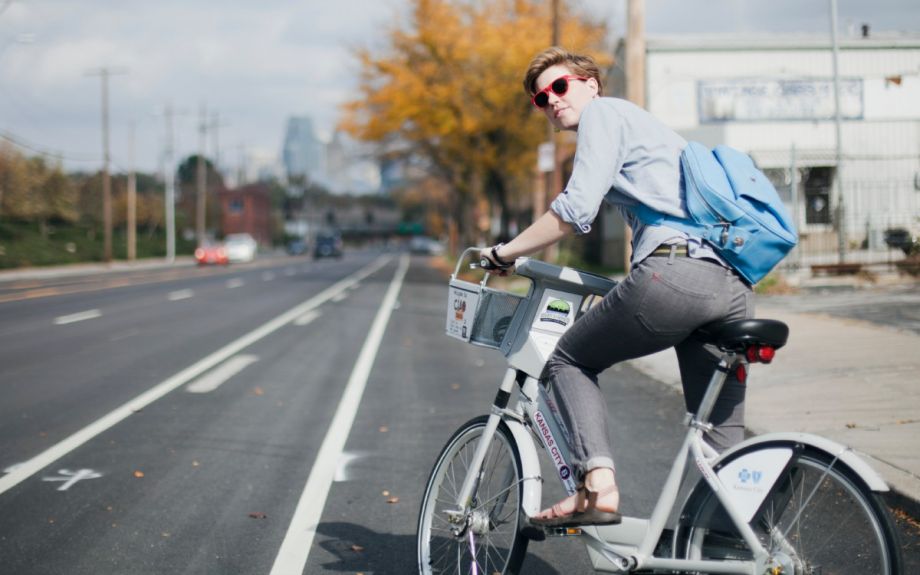 From the Wall Street Journal to our friends at Next City, reporters around the nation are paying close attention to the every movement of Citi Bike, New York City’s massive bike-share system. It’s an interesting unfolding story for sure, but for those of us who live in smaller cities far from the coasts, it is not the most instructive. Bike-sharing is happening everywhere and nowhere else does it look like it looks in Manhattan.

I am the co-founder of a small bike-sharing system in Kansas City called Kansas City B-Cycle. Service launched in 2012 with 12 stations and 90 bicycles.

It began as a project of BikeWalkKC, a nonprofit bicycle and pedestrian advocacy organization I co-founded with Eric Rogers and Eric Bunch. We take our mission very seriously and built the system to put more bikes on the road to solve that old chicken-and-egg problem when it comes to bike infrastructure. We built the bikes with help from our supporting sponsor Blue Cross and Blue Shield of Kansas City, hundreds of volunteers, and a number of supporting sponsorships.

We learned on a small scale what worked and saw quickly what did not. We were able to instantly pivot when something went wrong and implement necessary changes. Our program today is proof that, in fact, thousands of residents will travel by bike if they are given the opportunity. GPS allows us to know where and how they ride. We proved our concept and will be adding another 12 stations this summer.

Kansas City B-Cycle is growing slowly and steadily with our community partners, and we have done it with elbow grease, community fundraising and a grassroots effort that has helped us survive when the going got tough. We have had our own slate of problems: blazingly hot summers, a polar vortex, battery issues on the bike stations, rust on the bikes, a car-centric community and the ever-present hills of KC.

In our early planning stages, my colleagues and I were quite surprised about how little information was available about the systems, and how predatory some of the consultants were in the client interview process. Operators were secretive about their data. No one would talk about their funders. And everyone wanted to be brought in (on our dime) to help Kansas City figure out what would be best for us. With some of the vendors, their prices and elitist attitude were astonishing. That’s why we did it ourselves.

I realize that the entire nation was new to the bike-sharing concept, but bike-sharing is not rocket science. It’s not even bike science.

Bike-sharing is potentially a huge business. Large companies look at it and see large contracts, federal investment, and a goldmine of advertising and corporate marketing opportunities. The business model is wrong: Bike-share should be built from the bottom up; essentially, the bikes belong to the people, and that is the way it works in KC.

We chose to work with B-Cycle as a partner rather than simply a client. Rather than letting the company take the reins on planning, we hired a local consultant to help guide us through the analysis, in which we measured aspects like intensity and density of the area. The study also measured topography, barriers and the population of service jobs in an area. After reaching out to the public to ask where they wanted stations, we saw that the study’s findings and the public’s input lined up almost perfectly. Some people wanted a station in front of their house, of course, but mostly people put requested places that would work for everyone.

The entire team learned the minutiae of bike-share, and we saved tens of thousands of dollars doing it ourselves.

We have a joke that our bikes look like NASCARs: They have six places where someone can buy advertising and show their support for the system.

It might seem easy to have a few large sponsors who pay big bucks and take care of the lion’s share of funding in one swoop. But we’ve found that making sponsorship accessible through smaller buys and more affordable pricing is a way to build community support for the bikes. While Kansas City B-Cycle has one major sponsor, Blue Cross and Blue Shield Kansas City, smaller businesses also use our bikes to get their name out on the street.

One problem our system has not had is overnight success. I’m often asked, “Aren’t you jealous of Citi Bike?” and “Don’t you wish you could’ve had one large funder?” Truthfully, it would have been nice to have started big and sexy — with celebrities riding the bikes and immediate brand recognition. But, after reading the news about Citi Bike’s funding dilemma, I’m glad we took a gradual approach. I’d advise anyone starting a bike-share program to take a more Midwestern approach: Go slow, build community and “barnraise.”

We “barnraise” for everything in the Midwest. We work together on community projects and help our neighbors with everything from mowing lawns to painting houses.

We need to nationally “barnraise” bike-sharing by providing open forums, making funding transparent, and opening the books on the value and economic impact on bike-sharing in all markets.

Bikes are not likes buses or trains. Bikes break down barriers to communication. Bikes are somewhat personal. Think about the last time you rode a bike — people say “hi,” people wave, people are generally human to cyclists. This does not happen on the red line in DC. Community involvement and transparency must be a part of bike-sharing systems or they will falter.

In the words of Mark Twain, a hometown hero, “A man that carries a cat by the tail learns something he can learn in no other way.” Bike-share in Kansas City could’ve been easier, faster, sexier — but we would have had to sacrifice many of our Midwestern values and rely on outside consultants to tell us what was best.

I’m excited for our slow and steady growth. I’ll take that any day over big, blue and broke.