Big Dreams for a Wasteland Twice the Size of Central Park 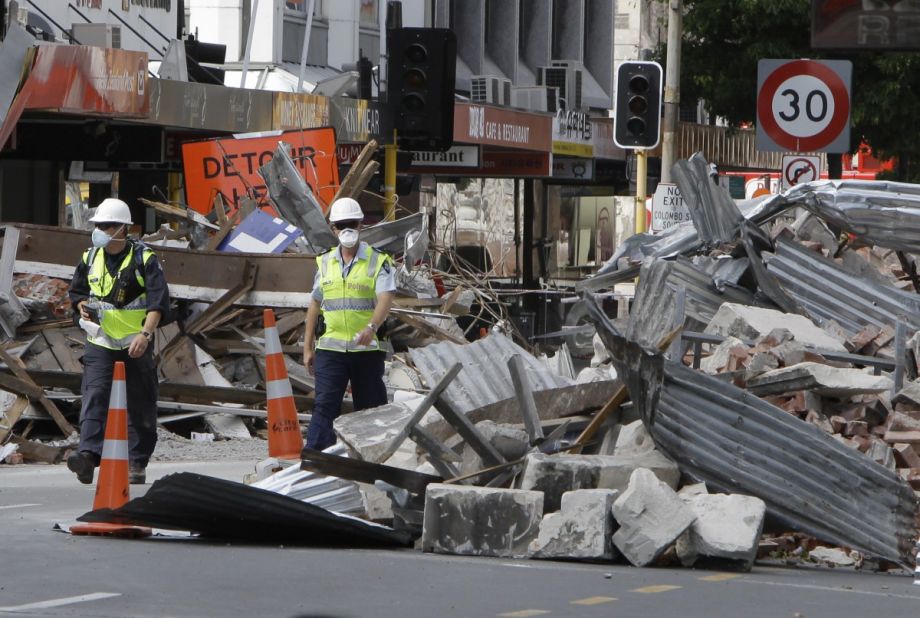 Liquefaction caused by the 2011 earthquake left a swathe of Christchurch uninhabitable. (Photo by AP / Mark Baker)

All around were memories of what once was there. Smith used to live in a suburb much like it. But on February 22, 2011, the 6.3-magnitude earthquake that hit Christchurch, New Zealand, and the region around it devastated homes and brought liquid soil gushing to the surface of the earth. The land was ruined and deemed too damaged for “practical and timely repair.”

Following the quake, the government effectively declared an area almost twice the size of New York’s Central Park uninhabitable. This land was renamed the “red zone” and abandoned. Snaking along Christchurch’s Avon River, the zone’s nearly 8,000 homes were methodically razed and cleared, or simply left to rot where they stood.

Since his own home was destroyed, Smith has pursued a singular question: What do you do with a wasteland?

“It’s been a wound that’s gone through the east for about three years now,” he says. “It’s important for the wellbeing of all communities around here that this area transforms.”

How exactly it should transform is an ongoing debate in Christchurch, with various groups coming up with ideas ranging from creating a three-kilometer flat-water sports lake for rowing and kayaking, to a 350-meter surfers’ wave garden that would provide a perfect point break every 30 seconds. There’s even a proposal to create something that replicates the Eden Project, the covered biodome in England that’s attracted millions of visitors since opening in 2001.

But the plan that has gained the most traction calls for something different altogether. It proposes to return the red zone to what it once was before being cleared for farming and habitation in the 19th century: a wetland and native forest. While other ideas are in their early stages, a petition for this reserve and river park concept proposed by Smith and others has generated almost 20,000 signatures and undergone feasibility studies.

Smith and his organization’s concept is to take what has been a blight on the landscape and turn it into an ecologically responsible site the community can be proud of. The end goal is a large eco-park straddling the river. As a first step, Smith and his partner organizations have created a small community garden that teachers use to educate their pupils about the area and its native flora.

An array of potential amenities that could in included in the eco-park include an amphitheater set into a bend of the river where outdoor concerts and performances could take place and a cycleway that could follow the river all the way into the city. This cycleway could be lined with boutique retail shops, floating restaurants and cafes that replicate the paddle steamers that used to ply these waters in the 19th century. Throughout the park there would be sanctuary areas fenced off from predators, heritage trails, and community gardens that residents could plant and take food from. There could be dog parks, sports fields and nature corridors.

A report commissioned by the Avon/Otakaro Network and undertaken by Lincoln University estimated the potential economic benefit of such a project to be $94 million per annum, mostly gained through public health-costs savings and the value of the ecosystem itself. In addition to providing space for walking, jogging and cycling, the report said, the eco-park could connect suburbs to the economy of the central city and improve the water quality of the river and surrounding wetlands. Those lakes and wetlands could also help storm-water management and flood control – a big problem since the land in Christchurch sunk up to half a meter after the earthquake.

The key word in all of this is “could.” The end concept would take decades to come to fruition and tens of millions of dollars to create. It will also require buy-in from the government. Until that happens there are still thousands of people living along the red zone’s border. Smith said the river park idea might give them hope that one day they’ll live next to something more life-affirming than a former neighborhood full of broken houses.

And still, there is some chance that part of the red zone could be made safe again to rebuild on. Many residents have been vocal about their wish to return. Smith has another hope, however. “I’d rather it be a park and be able to take the grandkids there at some point in the future and say, ‘This is the tree your dad played in.‘”