Sensors Listen, Count, Monitor and Invite the Public to Watch – Next City

Sensors Listen, Count, Monitor and Invite the Public to Watch 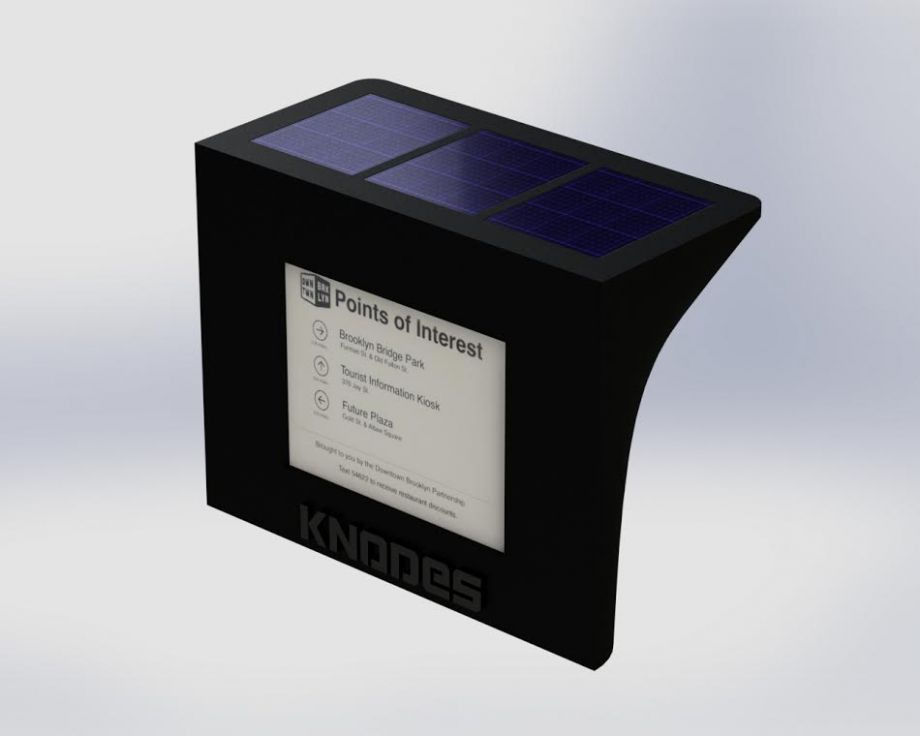 Rendering of e-paper signage for the Knodes system

In a technerd-enviro-urbanist love story, Tommy Mitchell, a hardware designer, and Andy Glass, a software engineer, met six months ago at a fellowship in Long Island City, Queens. Their shared obsession with the crux of the environment, smart cities, data and the Internet of Things led them to New York City’s civic tech challenge Big Apps 2015.

They started, Glass says, with thinking about “a way to capture data and serve it to constituents.” Knodes is their answer. (They didn’t win Big Apps this year for Knodes, but Mitchell won for his other project, CityCharge, to create solar-powered charging stations in the city, and Glass won last year for his project Explore NYC Parks, which lets you, well, explore NYC parks.)

“We see Knodes as the eyes and ears of this city,” says Glass, but it’s also, in effect, a mouthpiece. Knodes is three interconnected components. The first is a network of solar-powered modules (knodes), which contain air quality, sound and pedestrian-counting sensors that can be installed in public spots around cities. Currently, the pair has only developed the technology for the sound sensor, but the other two are in the works. The second component, the mouthpiece, is solar-powered e-paper monitors on the knodes with the ability to display this data, other data or anything else. The third component is KnodesPortal, a back-end web-interface system that allows users to track data collected by the sensors in real time, map the knodes in the system, manage knodes remotely, integrate other open data sources, set alerts and schedule projects.

The design considerations in crafting Knodes focused intensely on making the product into a viable tool specifically for cities. “We wanted to make it very easy to use,” Glass half jokes, “because cities are not the best with implementing technology.” They tried to think “like a city administrator” to create a system easy to configure. The hardware considerations were similarly practical. For example, solar panels must carefully angle up to maximize sun exposure; and the devices must be waterproof, tamper-proof and easily attachable to many types of infrastructure.

They could also provide alerts for service changes or delays. They could display points of interest in a neighborhood or announce community events. What if the times and locations of community board meetings were displayed at every bus stop? Would civic engagement improve? They could also show Amber Alerts, or become emergency alert systems, especially since they don’t rely on the electric grid. And what if they display air quality information? On an obvious but important level, “hyperlocal emissions data could affect where people want to live,” Glass points out.

Glass and Mitchell have also given much thought to how Knodes can financially benefit cities. They’re looking into full-color e-paper technology so the monitors could display revenue-generating ads. Chambers of commerce could use the pedestrian trackers to study how and when people shop. And the modules themselves will be cost effective since they’re solar-powered and because e-paper runs on minimal energy.

They’re currently using their prototype to track the noise of a construction site outside of Mitchell’s apartment to design a way that cities can use the sound sensors to levy fines on construction sites for noise ordinances and operating hours. “We know the city has a lot of problems with tracking noise and ordinances that are consistently violated,” explains Glass, “and there’s still not a good end-to-end product with a software back end to solve this.” The admin software Glass designed would allow cities to track revenue streams coming in from levying these types of fines.

But the Knodes project has implications beyond the simply pragmatic. “So much data is out there and not publicly displayed,” says Glass. And it’s true. There’s endless publicly available data that’s only “publicly available” for the select few who know where and how to access it and the even fewer who both have the knowledge and technology to interpret it.

Mitchell and Glass are trying to change this. “We’re interested in what can we tell people about their local environments,” says Glass. Their back-end system allows for the combination of real-time data with any external data sources to produce useful insights. Combined with the e-paper signage, this creates a capacity to really make data “public” in the most literal sense of the word: displayed on street corners in what Glass called “actionable” data — in other words, data that people can use to make decisions.