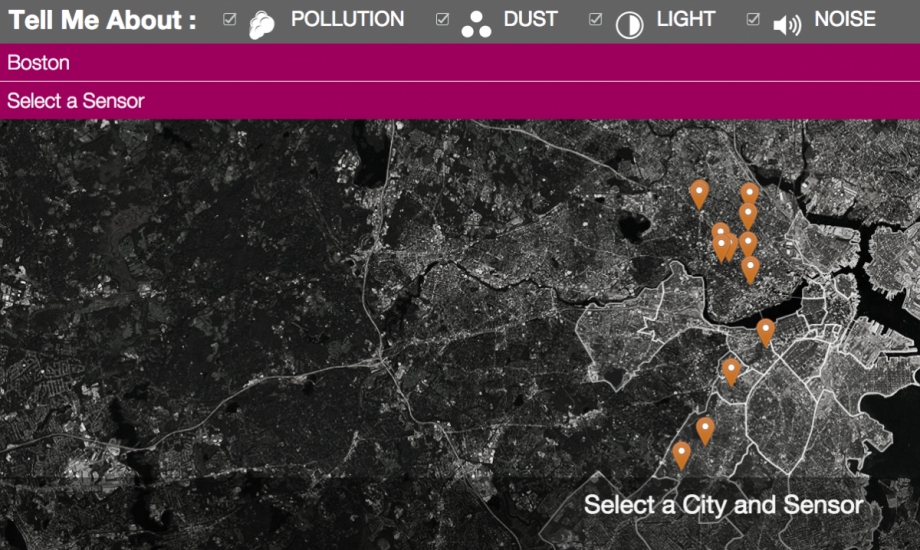 Urban Heartbeat, which turns data into sound, was one of three winners in Data Canvas’ recent Sense Your City competition.

In just a few decades, we’ve turned into a data-producing species. According to some estimates, there is now more data produced every two days than in all of history prior to 2003. The promise is this: If we could just unlock and understand this data, our cities would be more efficient, our economy more vibrant, our lives better.

But data is not an easy thing to grab onto. It can be misinterpreted, skewed or plain wrong. It can contain noise that obscures the signal.

Enter citizen-science-cum-art collaboration Data Canvas, a partnership of San Francisco-based nonprofit Gray Area, Lift Conference and Swissnex, a public-private organization that encourages innovation exchange between the Bay Area and Switzerland. The idea: Give artists access to massive data feeds and see what they do with it, then project the finished visualizations on giant screens on the sidewalk.

“As we were studying what the content might be … we thought we needed to create datasets that are real time,” says Josette Melchor, executive director and founder of Gray Area. Real-time open data isn’t commonly at hand, so the project authors decided to generate their own for their most recent challenge. “That’s how [this] turned into the Sense Your City project. The goal was to create real-time data so that we could have more engaging projects that were basically alive.”

First, Data Canvas deployed 100 DIY sensors over seven cities in four continents, which are collecting data on temperature, light, noise, dust, pollution and more. A challenge to artists — do something interesting with this — followed.

The three grand-prize winners were Sonic Particles 2.0 and Urban Heartbeat, both apps that turn data into sound but in different ways, and “It Feels Like,” a website that lets users compare the weather in, say, Geneva, with the weather in Bangalore, to find when the weather conditions are similar in those two cities.

Some of the projects might leave you with a vague “Is this it?” feeling. Runner-up “Seeing the Air” uses visualizations to show how air quality differs in each of the seven Sense Your City cities and how it varies over time. The results, while pretty, show that Geneva’s air is typically better than Rio de Janeiro’s, which should not come as a surprise to most people. Or they show that Geneva’s sensors were placed in generally cleaner areas, or that one of the sensors froze and stopped collecting reliable data. It’s hard, really, to know, and even the builders of “Seeing the Air” admit that the data is collected by “off-the-shelf equipment set up by volunteers, and may not be as accurate as industrial equipment.”

Another project renders cities as — seriously — birds during mating season. The user sets her preferences for temperature, noise, humidity and so forth, and gets a matching “ideal city” based on those characteristics.

If it all seems a little silly, perhaps it is. But big data as a field is still in its infancy — and experimentation across all sectors, from mathematics to the arts, could prove worthwhile as we develop the big data rules we want to set as a society. And the more urbanists of all professions who kick around data, the better the chances for its applications not getting siloed.

Data Canvas, besides being a fun art project, was “also an exercise to show people that working with real-time data is actually difficult,” says Emina Reissinger, of Swissnex San Francisco. Case in point: Data Canvas gave one of its sensors to CERN, the particle physics research group. “It turned out … when they installed it, these particle physicists switched two sensors, which caused these numbers to be completely off the charts.” (They had also mounted the sensor outside, which promptly froze.) “We have had scientific advisors who work specifically on environmental sensing … . They have told us it is very difficult to work with this kind of data. [Data Canvas] shows people how sensitive it is, and how difficult it is to work with this data and make sense of it.”

Smart-city big-data projects have thus far run to the practical: New York City uses data — though not real-time sensors — to predict which buildings are most at risk for fire; startup SNIPS mines data to predict how full Parisian commuter trains will be up to three days in advance. Real-time bus arrival apps or signboards have become commonplace in many cities, so much so that their presence is taken for granted.

Real-time data of the sort that Data Canvas is releasing — as in, volunteer-generated, real-time data on noise, light, weather and pollution — does in fact have practical uses. The TenderNoise project (not part of Data Canvas) tracked noise pollution in San Francisco’s Tenderloin district. “What this caused was a series of reports to 311, the Department of Public Health responding and having a dialogue with neighbors about the health implications of noise pollution,” Melchor says.

Next, Gray Area is working with the Urban Heartbeat project creators to expand it, adding new data streams from private partners who have information on real estate, transportation and more. Visualizations from the project will be displayed on giant, street-level touchscreens at Gray Area’s headquarters in the Mission District. Melchor says, “We’re working on … trying to figure out what’s relevant to somebody as they’re rushing by on their commute. How do you make people stop and look at data?”