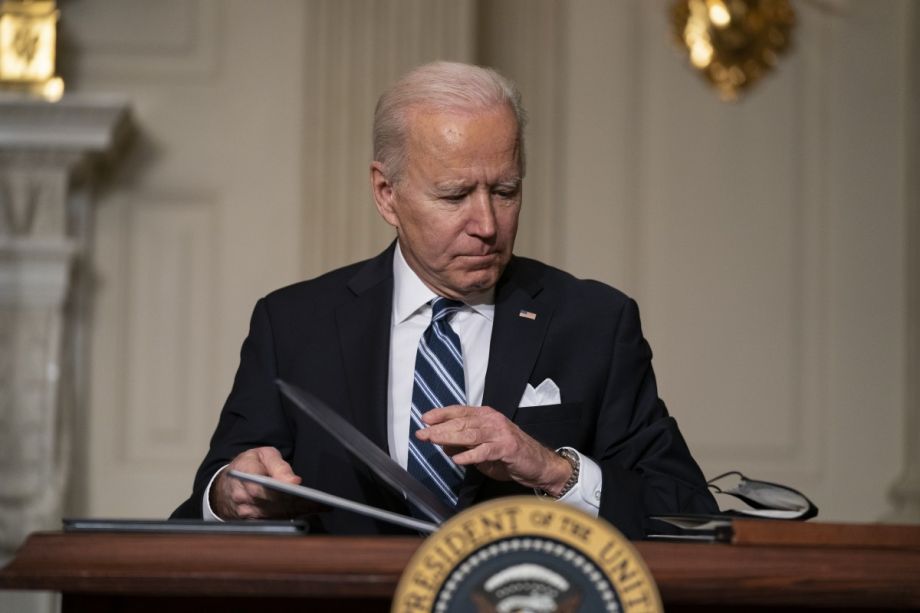 In this Jan. 27, 2021, file photo President Joe Biden signs a series of executive orders on climate change, in the State Dining Room of the White House in Washington. In a flurry of executive actions in his first eight days in office, the president is trying to steer the U.S. economy from one fueled by fossils to one that no longer puts additional heat-trapping gases into the air by 2050. (AP Photo/Evan Vucci, File)

On his first day as President, Joe Biden signed an order declaring that the United States would re-enter the Paris Climate Agreement. The 2015 treaty, signed initially by 196 countries, including the U.S., requires each member to reduce its emission of greenhouse gases enough to collectively prevent the average global temperature from rising more than 2 degrees Celsius. (The agreement went into effect on November 4, 2016, four days before Donald Trump was elected president. Trump then initiated the U.S.’s withdrawal from the agreement, which became official on November 4, 2020, one day after Biden was elected president. On the United Nations web page that lists the signatories to the agreement, the United States has by far the longest footnote. )

A week later, Biden signed a series of “Executive Actions to Tackle the Climate Crisis at Home and Abroad, Create Jobs, and Restore Scientific Integrity Across Federal Government.” The orders are aimed at making good on the country’s commitment to the Paris Agreement, and they are designed to incorporate climate action into every aspect of the government’s work. Specifically, among other things, the orders call for the U.S. to produce all of its electric power without using fossil fuels by 2035, to replace its entire fleet (around 645,000 vehicles) with electric vehicles, and for federal agencies to create plans for resilience and adaptation to climate change. In some respects, cities have a head start.

As president, Trump justified his decision to withdraw from the agreement with some specious comments about being elected to represent the people of Pittsburgh rather than Paris. Those comments were a complete misrepresentation of what the Paris Agreement is, and they also prompted a backlash. Soon after Trump announced that the U.S. would withdraw, hundreds of cities signed on to a campaign called “We Are Still In,” pledging to continue reducing their own emissions to advance the goals of the agreement. Other groups, like the national Climate Mayors consortium and the international C40 Cities network, have helped cities set standards for carbon reduction at the local level.

On electrification of vehicle fleets, for example, many cities are participating in the Climate Mayors Electric Vehicle Purchasing Collaborative, designed to “leverage their collective buying power and accelerate the conversion of municipal fleets to electric.” One of the initial challenges of switching to electric vehicles is that they tend to cost more upfront than the gas-powered vehicles that fleet managers are used to buying, says Ben Prochazka, director of strategic initiatives for the Electrification Coalition, a nonprofit group focused on reducing oil dependence that helped organize the collaborative. But electric vehicles can be cheaper to operate long-term, he says. And group purchasing can lower upfront costs.

“It can save taxpayers money at the same time that they’re meeting other critical needs, like reducing greenhouse gas emissions,” Prochazka says.

The collaborative now includes more than 250 cities and other entities committed to buying more than 4,000 electric vehicles. Federal demand for electric vehicles could help speed up production, and potentially lower costs for cities further, Prochazka says. Many cities have included fleet electrification in their climate plans.

Philadelphia has begun replacing city-owned vehicles with electric vehicles, and is close to releasing a “clean fleet strategy,” says Christine Knapp, director of the city’s Office of Sustainability. Currently, around 1 percent of the city’s fleet is made up of electric vehicles, and another 5 percent are hybrids, according to stats shared by Knapp. The city has also begun purchasing some of its electricity from solar sources. But Knapp says that the city doesn’t have the ability to convert the overall electrical grid to wind and solar sources. The federal government could speed up that process through policymaking and investments, which would allow cities to reduce their carbon emissions more quickly, she says.

Los Angeles, on the other hand, does control its own power: the Department of Water and Power, the biggest municipal utility in the U.S. Powering the utility with renewable sources is a key part of the city’s goal of decarbonizing its entire economy, says Lauren Faber O’Connor, L.A.’s chief sustainability officer. L.A. Mayor Eric Garcetti is chair of C40 Cities, and O’Connor says the city is continually trying to push its own decarbonization goals farther. The Department of Water and Power has a goal of switching to 100% renewable sources by 2045, and last year alone, it was able to purchase 13% more power from renewable sources, including new wind agreements.

Los Angeles has billed its climate plan as a “Green New Deal,” an approach that’s meant to tie decarbonization to economic justice, by creating jobs for people in communities that are harmed by pollution and threatened by climate change. Biden’s executive order also emphasizes creating “well-paying union jobs” in climate-focused projects.

“I’m excited and confident that [the Biden administration] will approach their policy initiatives in ways that further empower cities to continue to do what they’ve committed to, and to supercharge our efforts and to raise the bar for everyone,” O’Connor says.

Specifically, O’Connor says, the federal government should “see every building in America as a shovel-ready project.” In most cities, the energy used by buildings accounts for the majority of carbon emissions. New York City adopted a group of laws in 2019 requiring the owners of the city’s largest buildings to sharply reduce their energy use by 2030. Through investments, the federal government could decarbonize privately owned buildings in other cities, O’Connor says.

“They have the power of the purse and they can provide … significant funding opportunities that can be flexible and that can go straight to cities,” O’Connor says.

The City of Boston, built alongside a harbor and especially threatened by sea-level rise, has released a series of plans aimed at both adapting to and mitigating climate change. As part of its Climate Action Plan, the city has a goal of requiring zero-net carbon construction for all new buildings by 2030. The city’s Planning & Development Agency is working on an update of zoning and green-building standards to implement that goal. Last year, the city announced an investment of $30 million for affordable-housing projects that are carbon-neutral. And the city has worked to focus the benefits of its climate programs in low-income communities and environmental justice areas, says Katherine Eshel, the city’s carbon neutrality program manager. Further investments from the federal government could help cities develop the workforce and build new public infrastructure in many of those same communities.

“Given Covid-19 and the focus on air pollution and racial justice, there’s a sense of urgency in doing this work in a way that’s equitable,” Eshel says.