Pinpointing the Most Powerful Design Elements in City Parks – Next City

Pinpointing the Most Powerful Design Elements in City Parks 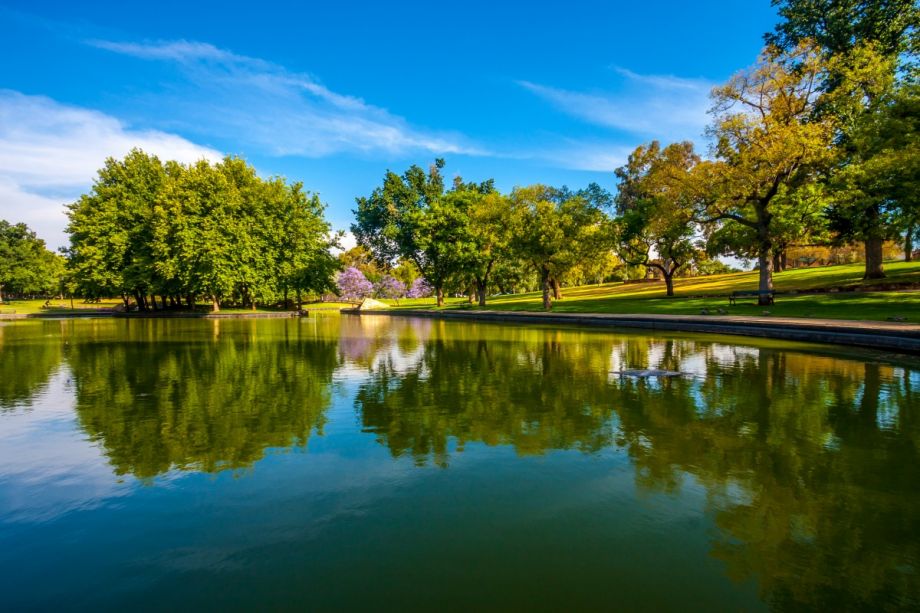 Nature’s soothing power has been a foundational tenet of design for centuries — one confirmed by various researchers in the last 100 years. But the functions of causation have rarely been precisely defined. Even the simplest natural pockets are packed with overlapping triggers. So how do you determine which features of a city park, in isolation or in concert, are giving visitors a feeling of respite?

That question is one that the TKF Foundation, an organization that supports the construction of urban parks for their spiritual benefits, is now trying to answer. The foundation hopes to build a body of peer-reviewed science that will not only validate its mantra — that nature, even in small doses, can be a powerful restorative tonic — but also provide lessons in how that effect can be achieved.

“There’s been tons of research on this subject, a massive body of research, but a lot of it is not applied research,” says Mary Wyatt, the foundation’s executive director. “We wanted to do something that could get out into the public arena.”

Since 1996, TKF has distributed grants to over 130 urban parks in the Baltimore-Washington area, as well as farther afield, and this is its final project. The hope is that TKF’s six place-based design and research grants, awarded in 2012, will substantiate the testimonials that appear in open journals the foundation places in its parks. The new goal is empirical evidence for the transformational power of nature.

MaryCarol Hunter, a professor of environmental psychology at the University of Michigan, has received grant support from TKF to help bridge the gap between research and practice. There are few prescriptions for evidence-based design beyond “green is good,” notes Hunter, who is also a landscape architect.

To winnow down the list, Hunter began corralling theories for why humans like certain appearances of nature, some from design aesthetics, others from evolutionary history, and looking for properties common to those ideas, like a landscape’s “coherence” or ease of access. Hunter then found physical park features that could be associated with those properties.

“There are things that humans respond uniformly positively to,” Hunter believes. Her list of 62 park features, published in Frontiers in Psychology in August, is a kind of catalog for human preference. They include “direct access to paths,” “skyline position,” “animals,” “shade,” “water expanse” and so on.

The result is that hard-to-measure concepts thought to be attractive to humans, like the ability to perceive depth, can be broken down into measurable parts: the position of the horizon line, the presence of nearby tree trunks, the proximity of fellow humans and so on. The next step, Hunter says, is trying to isolate the influence of each of those aspects — thereby breaking the broad, ineffable appeal of a park into quantified components.

Marc Berman, a psychology professor at the University of Chicago who is also working with TKF, is taking a different approach. In a study published in December 2014, Berman used a fine-grain visual analysis of park photographs to determine which low-level patterns of space and color contributed to a sense of “naturalness.” Using abstract images, he hopes to isolate the roots of our positive feelings for nature: Would the shape of a tree still make you happy if you didn’t know it was a tree?

Of course, parks aren’t just about visual stimulation. “We’re going to do the same thing with sound,” says Berman. “We play people natural sounds versus urban sounds, break down sound profiles and different wave formations. What are those features that people like?”

Is it a park you’re enjoying? Or just a collection of lines, colors and noises that you tend to find in nature?

You would think Hunter and Berman’s research would stand as a kind of challenge to park designers, a step in reducing Frederick Law Olmsted’s romantic art to a data-driven science. But both researchers, who presented their work to the American Society of Landscape Architects, say that architects were excited to learn about their findings.

The foundation’s roots, like its aims, lie in real-life gardens. In 1996, founders Tom and Kitty Stoner stumbled upon a London park called Mount Street Gardens. During the horrors of the Blitz in World War II, the secluded Mayfair site served as a balm for Londoners’ frayed nerves. Returning to Annapolis, Maryland, the Stoners decided they would try to nurture such spaces in American cities.

The weight of published science, they feel, will help that cause. And, perhaps, it could benefit the design community at large. “Frankly,” Berman told me, “I think the research applies to any built space.”