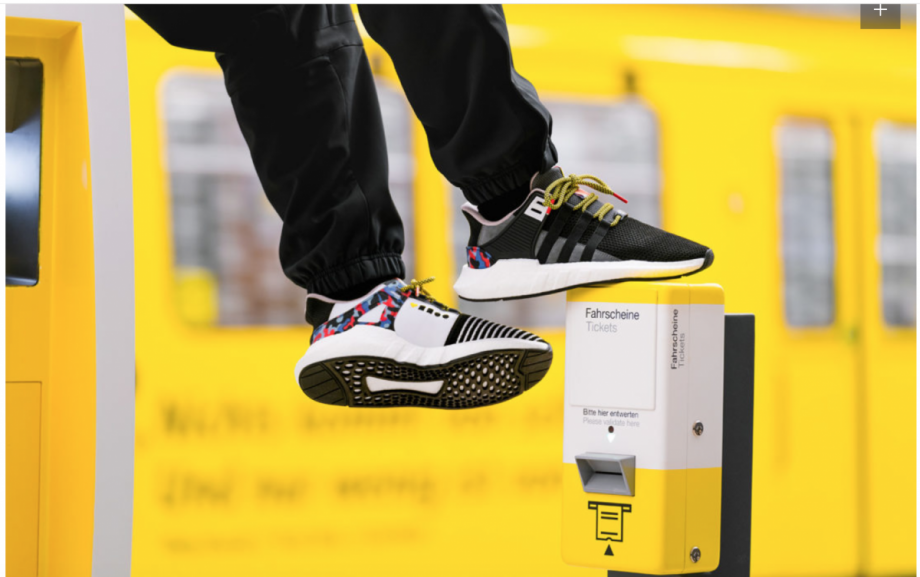 In the U.S., we carry CharlieCards and Metro Cards and ConnectCards — slim pieces of plastic that we swipe to board our trains and buses cash-free. As of last month, Berlin, too, has an innovative new cashless system. But it’s a not a card. It’s a pair of shoes.

The colorful sneakers, which feature a ticket sewn into the tongue, are the product of a partnership between Berlin’s mass transit system BVG and Adidas, Footwear News reports. From the paper:

The sneaker-slash-subway-pass borrows design elements from Berlin’s subway: Neon yellow laces mimic the train’s sunny exterior, the shoe’s camo-like accents are taken from the train seats, and sharp stripes that line the toe resemble the connected cars. And days before its … release, consumers reportedly camped out for several days to get their hands on one of the 500 limited edition pairs.

From a U.S. vantage point, there’s something cringe-worthy about the idea of riders gaining access to their local transit system by way of brand-name shoes. Here, all-cashless systems raise tough questions about equity — like how they’ll limit access for seniors and the unbanked — and are increasingly criticized for enforcement methods that deter immigrant communities from riding. Transportation Justice, they name is not Manolo Blahnik.

But the Berlin shoes aren’t just for the wealthy, according to the Guardian. The cheapest annual ticket available from BVG goes for €728. The shoes cost only €180, and they’ll allow passengers to ride for free all year. Petra Reetz, a spokesperson for BVG, told the Guardian that the agency’s motivation is getting more young people on transit.

“I said, ‘We are a public transport system, not Michael Jordan,’” she said, expressing her initial skepticism. “But in a big city like Berlin, the quality of life and quality of the air are important. We wanted to tell young people public transport is cool — you don’t need to buy a car.”

The camouflage accents from the shoes will also appear in a line of merchandise from the transit agency that will include swimming shorts, baby bibs and teapots. Overall, the collaboration with Adidas is “about repositioning the BVG as central to the brand of the city itself,” according to the Guardian.

For now, it seems unlikely that the shoe-as-transit-ticket will translate widely to the U.S. market — at least not as anything more than a venture-funded novelty. As Next City has covered, transit riders want reliable service above all else from our sadly underfunded systems. If juice bars and WiFi won’t make us ride, neither will colorful shoes.