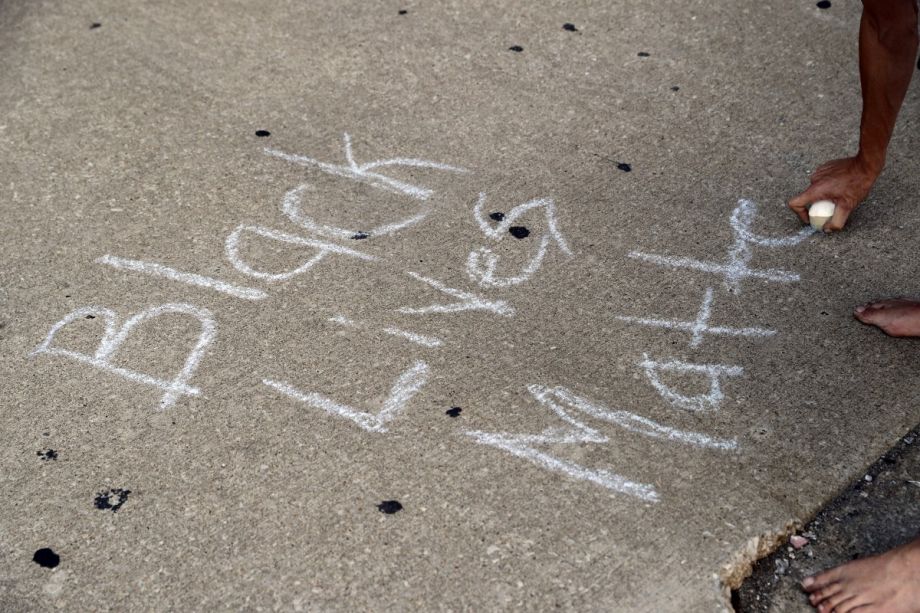 A protester writes, “Black Lives Matter,” on the ground with a chalk as protesters gather, Friday, Sept. 15, 2017, in downtown St. Louis, after a judge found a white former St. Louis police officer, Jason Stockley, not guilty of first-degree murder in the death of a black man, Anthony Lamar Smith, who was fatally shot following a high-speed chase in 2011. (AP Photo/Jeff Roberson)

In St. Louis, like too many places across the country, racial inequity is in the air. Black children in St. Louis are more than ten times as likely as white children to visit an emergency room for an asthma-related issue. Asthma, while genetic, is exacerbated by environmental factors such as air quality. The consequences of such disparate outcomes go beyond health and the cost of emergency room visits — St. Louis Public Radio reports that asthma is one of the leading reasons children miss school in the city.

It’s a reality that some know all too well from experience, while others may have no idea what their neighbors in other parts of the city have to overcome. Issued by the Office of Mayor Lyda Krewson, St. Louis’ new Equity Indicators Baseline Report hopes to plug such information gaps when it comes to child asthma as well as 71 other indicators of racial equity.

The report boils down a series of metrics into ratings of 1 to 100 for each indicator, with 100 representing no disparity between white and black residents of St. Louis. On child asthma, St. Louis scored a 1.

“I think it’s had similar shock value for a lot of the readers so far, even for the Mayor,” says Cristina Garmendia, who just wrapped up her first year managing the city’s Equity Indicators Project.

Identifying the indicators took more time than Garmendia initially expected. Data had to be available at the city level, updated annually at a minimum, and disaggregated by race. St. Louis is a predominantly black and white city, with 48 percent of residents identifying as African-American and 43 percent as Caucasian. As a result, the report hones in on these two groups — partly because data on other groups weren’t as reliable. In some cases, when race wasn’t identified, Garmendia used proxies for such as census tracts and zip code.

“As a Hispanic woman, I was disappointed many times to hear that the data for Hispanics and other minorities wasn’t reliable,” Garmendia says. “It’s a frustrating issue for many other minorities in our community to be erased from the conversation. But, if we can address how the systems aren’t not working for our most vulnerable, they’ll work better for us all.”

More significantly, it took time to hash out with community groups and city agencies what was important to measure and why. Garmendia says that she met with more than a hundred community groups over the course of the past year to discuss the indicators and get input to shape them. Just before she came onboard to the job, workshops took place with roughly a hundred people in five different groups in the St. Louis area.

Former Missouri Governor Jay Nixon created the Ferguson Commission to delve into the root causes of the unrest in the wake of the police killing of Michael Brown in the St. Louis suburb of Ferguson. The Commission produced a report, “Forward Through Ferguson: A Path Toward Racial Equity,” which among other things called for a racial equity benchmarking process. The Equity Indicators Baseline Report represents the initial result of that process.

In shaping the equity indicators, Garmendia worked closely with Forward Through Ferguson, a nonprofit created to monitor and implement the eponymous report’s recommendations.

“We were essentially given a blank chalkboard and told ‘okay, what do you want to measure?’ You get to make this meaningful, which is a great opportunity,” says Karishma Furtado, a staff member at Forward Through Ferguson. “It’s also very daunting.”

From there, they had some outside help. The St. Louis Equity Indicators Project based its methodology on the equality indicators methodology developed by the City University of New York’s Institute for State and Local Governance. The Institute conducted its baseline report for New York City in 2015, and continues to produce updated annual versions of its NYC report (see Next City’s previous coverage of that). The Rockefeller Foundation and ​100 Resilient Cities initiative joined with the Institute to expand its indicators methodology to five cities: St. Louis, Dallas, Oakland, Pittsburgh and Tulsa. As with the NYC “equality indicators,” the idea in St. Louis is to set a baseline year and track progress (or the opposite) from there.

Garmendia says she was surprised at how open people were to having conversations about equity — especially in government, which is often at or near the roots of racial inequity. “It could easily have been hard to have these conversations and people feeling defensive about their work,” she says. “But, I had a really positive experience working with people in power.”

Even the court system was surprisingly receptive, Garmendia says. Court system staff members were interested to understand why so many people end up in jail as a result of missed court dates. The court had never analyzed its own data to see what impact it is having.

For example, the municipal court issues warrants for the arrest of people who miss two court dates, often related to traffic violations. The report found that residents of majority-black zip codes receive warrants at four times the rate of residents of majority-white zip codes. It also found that black residents are more likely to be charged with minor driving status violations — i.e. “driving while black” — such as driving with an expired license plate or registration.

Identifying these disparities means being able to ask questions about why they occur. Garmendia says there is a research gap about why people don’t show up for court dates, but having unstable housing and not receiving mail could be a reason, being ill, not having transportation or simply being afraid of the consequences of going to court are all potential reasons people end up with a warrant for their arrest.

“For us to reduce the impact municipal warrants have on people, we need to reduce the number of warrants that are needed,” she says. “If there are so many people missing their court dates, it suggests there’s something wrong with our system that we should be trying to make improvements to that and improve the ‘customer experience.’”

One of the central takeaways for Garmendia was the notion that agencies can’t simply mind their own business and move forward as they had in the past.

“The definition of good governance is changing, and people don’t know what that means all the time,” Garmendia says. “We’re in a new era of governance where it’s no longer enough to be effective. You also have to be equitable, and defining what that means so that people can make progress on that issue is really important.”