Beloved Los Angeles Arts Space Buys a Place of Its Own 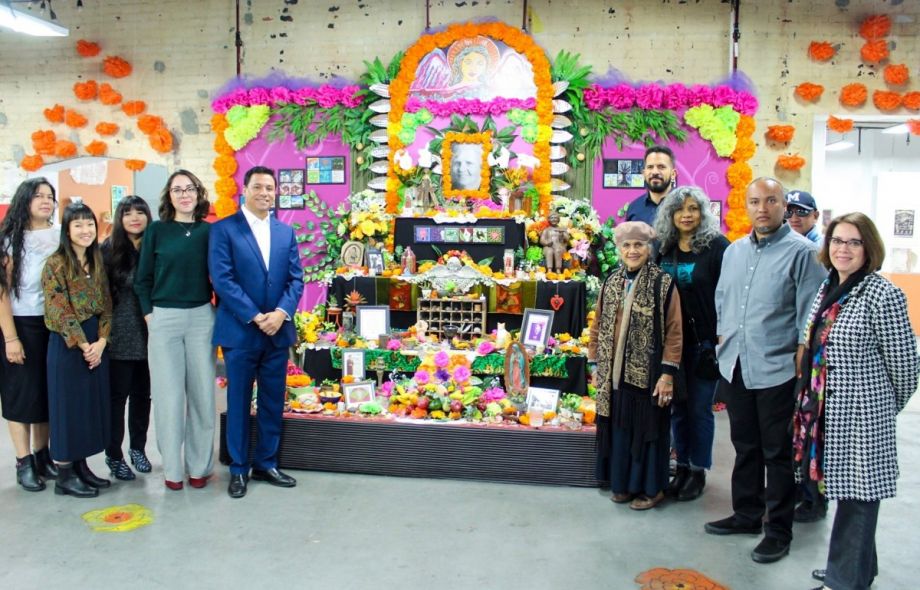 SHG Board Members, staff, legacy artists, co-directors and City of LA Councilmember Huizar take a moment in front of artist Ofelia Esparza's Dia de los Muertos altar (built for the organization's DOD celebration and PST LA/LA exhibition), to celebrate the news that the organization is closer to having a permanent home in Boyle Heights. (Credit: Self-Help Graphics)

When Franciscan nun Sister Karen Boccalero founded Self Help Graphics nearly half a century ago, her aim was to provide a space in Boyle Heights, then a mostly working-class Mexican-American neighborhood on the east side of Los Angeles, where artists could showcase their work and learn new skills.

First situated in a garage, the institution began by providing job training in silk screening, public education programming and a platform for some of the city’s most prominent Chicano artists.

In the decades since, the center has proven its staying power.

In the wake of Trump’s inauguration last winter, when millions of women across the country marched in protest, volunteers at the Boyle Heights space were on hand to print materials for the Los Angeles demonstrators.

It was the same scene after the Trump administration announced in September it would end the Deferred Action for Childhood Arrivals program. Self Help organizers set up a mini printing station in its parking lot, making posters in English and Spanish that provided tips on what to do if an Immigration and Customs Enforcement agent stops someone. (Federal district court judges have since issued injunctions against ending the program.)

But as concerns over gentrification in the neighborhood continue to grow, Self Help has had to find a way to secure its future.

“We already have some pretty clear roots in this location,” says Betty Avila, co-director of Self Help Graphics. “Do we want to up and move the organization? What does that move mean for a community that’s had so many instances of displacement already?”

No, to stay within its mission of serving Boyle Heights, Self Help would need to remain where it was. But that would require help.

Help came late last year when both the Los Angeles City Council, led by Councilman José Huizar, and Los Angeles County Board of Supervisors (under Supervisor Hilda Solis) voted to approve a combined $1.28 million funding commitment to help Self Help buy its building.

“Self Help Graphics & Art is an arts organization that grew out of a real need in the 1970s to nurture Chicano expression in the arts at a time Chicano Art wasn’t recognized as legitimate,” Huizar said in a December statement. “Yet in spite of challenges, this organization has grown in capacity, influence and recognition, benefiting eastside artists and our youth with their programming and assistance. These funds will allow them to continue being the great community asset that they are and to remain in Boyle Heights — the neighborhood they were founded in — for years to come.”

The $825,000 from the city comes from excess bond proceeds and brings funds raised to the full appraisal price of $3.625 million. The county’s contribution will go toward renovating the building and buying new equipment.

“We felt it was an important win for the community,” says Avila of the city and county support.

Beginnings
Boccalero, along with printmakers Carlos Bueno, Antonio Ibañez, Frank Hernández and others founded what would eventually be known as Self Help Graphics in 1970 with a used printing press in a garage behind where the nuns lived in East Los Angeles.

The organization incorporated as a nonprofit in 1973 and relocated to Boyle Heights thanks to space gifted by the Order of Sisters of St. Francis, where the institution remained unfettered by Los Angeles real estate increases for decades.

After the archdiocese-owned property was sold in 2011, Self Help Graphics relocated to the Ocean Queen building — this time as a renter.

It became clear that in order for Self Help to continue its work, the organization would need to get out of the business of being a tenant and either purchase the building or relocate yet again.

But with property values skyrocketing throughout Boyle Heights and increasing concerns over gentrification, purchasing the property on a nonprofit’s budget would not have been possible. So, Self Help turned to City Council and the Board of Supervisors in 2014 for financial support.

“We had conversations with [Huizar] about our shared vision for Boyle Heights, and about how … Self Help [would] amplify its impact, which would not possible unless we owned the property,” Avila says.

Ownership would allow Self Help to stay away from the pressures of rent increases or possible displacement and focus on providing the same type of programming in the community it’s served for nearly 50 years.

Creating impact
The impact Self Help has on the Boyle Heights community can be illustrated by the experiences of the thousands of youth who’ve entered its doors, such as Boyle Heights native Arleny Vargas.

The first in her family to attend college, Vargas is now a senior at Wellesley College. She first came across Self Help Graphics the summer before her junior year in college when she learned about a self-defense class offered there.

From there, she participated in the Soy Artista (Spanish for “I’m an Artist”) youth program, a five-week intensive workshop, where four days a week, participants learned about stencil art, photography and silkscreen printing. At the end of the program, participants showcased their work in an exhibition.

After the workshop, Self Help became kind of a second home for Vargas. She got to know the artists and youth and last spring was brought on as an intern in the communications department. She also helped organize around the “know your rights” efforts, including passing out posters to local businesses.

Up until that first program, Vargas was studying to be a translator, having grown up translating for her Spanish-speaking parents. The Spanish major and studio art major has since shifted her focus toward a career in photography.

While her formal studies have helped Vargas meet deadlines, it was her time at Self Help that helped her develop an authentic voice.

“Making my voice very apparent and very unapologetic is very important, especially during this political climate,” she says.

EDITOR’S NOTE: The original version of this article misstated the Weingart Foundation’s role in providing a grant to Self-Help Graphics and Art. We’ve corrected the error.