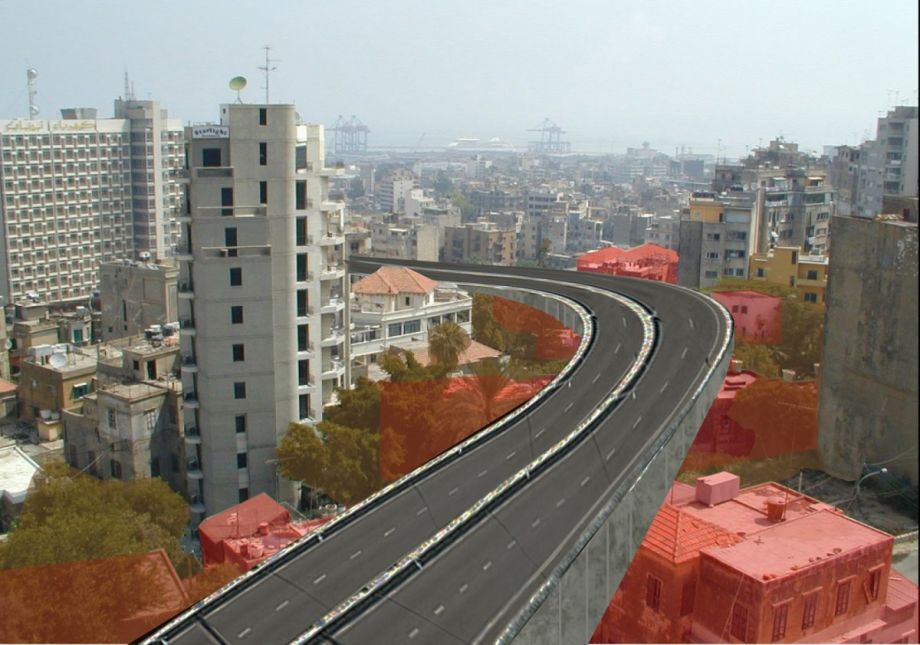 A rendering of the highway, expected to be completed in 2.5 years.

Getting from one side of Beirut to the other normally takes about 15 minutes. Rush hour, on the other hand, is an entirely different story. With around 2 million people working in this 20-square-kilometer city, with its joke of a public transportation system, a trip across town during the morning rush can take over an hour.

Earlier this year, in an effort to alleviate the congestion, Beirut’s Council for Development and Reconstruction (CDR) proposed an initiative. It wasn’t a plan to resurrect the tram system that used to efficiently connect the city’s neighborhoods, or to revive the railway network that once ran trains east to Riyaq and north to Tripoli. Instead, the proposal called for an intercity highway — a plan for traffic easement straight out of a 1960s urban renewal playbook.

The neighborhood as it currently stands, as compared to how it would look in the photo above with the highway running through it.

In this case, quite literally. The plan for the Fouad Boutros Highway was hatched half a century ago, calling not only for an elevated high-speed roadway, but also 700 new adjacent parking spaces. Save Beirut Heritage, an NGO focused on historic preservation, has argued that the highway would run right through some of the few traditional neighborhoods still intact after years of Lebanon’s civil war. It will “puncture the continuous street facade,” and “the perspective of the street will be blocked and disfigured by the huge concrete mass of the overpass,” the advocacy group concludes. All in all, the group estimates 28 heritage landmarks will be destroyed, and the traditional Ashrafieh, Hekmeh and Mar Mikhail neighborhoods of Beirut will be forever changed.

“What is now a slow paced neighborhood, free from fast, congested and heavy traffic, will be invaded by fast cars and strangled by traffic congestion,” Giorgio Guy Tarraf, cofounder of Save Beirut Heritage, told Iloubnan.info.

The highway would cut through some of the last traditional neighborhoods left in Beirut.

Moreover, the highway will cut through some of Beirut’s best public green spaces in an overdeveloped city already starving for more parkland. The kicker, according to a report written by Wajdi Ghoussoub, a member of the Democratic Renewal Movement’s youth branch, is that building a highway in the middle of Beirut would do little to ease the burden of traffic. “There is ample evidence that intercity highways do not alleviate traffic,” Ghoussoub wrote in a policy brief.

Nevertheless, work on the highway is moving forward. It’s expected to last 2.5 years and cost $60 million — money that could be spent upgrading the city’s rickety mass transit infrastructure. Today the only public transportation options are private buses, vans and an armada of taxis that clog the roads. Most Lebanese who commute in and out of the city still drive their own cars rather than carpool or use transit.

The CDR, the party responsible for updating and reconstructing Beirut’s transportation infrastructure, reports directly to the Lebanese council of ministers, and its task is enormous and multi-layered. Which is why Ghoussoub believes that Beirut needs a separate council that would be responsible for “funding a mass public transit system” for the city. Other priorities for the council would be to reactivate the railway system in and around Beirut, and upgrade or establish ports in other coastal cities to decrease truck traffic in and around the city.

An alternate plan put forth for a string of parks was rejected.

These days, in the absence of meaningful public transportation, many Lebanese use a shared taxi system for which they use the French word service, in which privately owned taxis stop to ask customers where they are going. If the customer’s destination is on the taxi’s regular route, the driver will pick them up and charge them a fee of 2,000 LL (about $1.33). If not, the charge is 10,000 LL (around $7.50). Other Lebanese have tried to take up riding bicycles, though Beirut doesn’t have dedicated bike lanes. Cars often park on sidewalks, making it hard enough for pedestrians to get by, let alone bikes.

Despite the obvious need for more people-oriented transportation infrastructure, the activist pushback against the highway remains a rigged fight. In a city like Beirut, developer interests often trump the public good.

“Rethinking of intercity highways is a multi-decade process that needs to start immediately,” Ghoussoub wrote. Whether it will start with this particular project remains far from certain.

Photos and renderings courtesy of Save Beirut Heritage