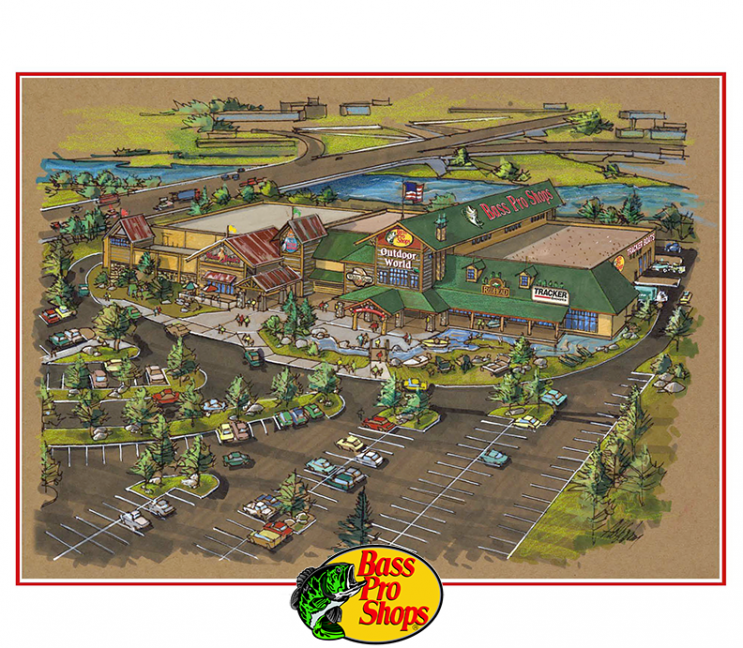 A rendering of the Bass Pro store planned for Steel Point in Bridgeport, Conn.

Bridgeport officials now say the fortunes of Steel Point will turn this summer when building begins on the area’s first anchor, a 150,000-square-foot Bass Pro Shops, which sells boats and outdoor supplies.

The city plans to add other shops, hotels, a public waterfront and up to 2.6 million square feet of housing in a project estimated at $1 billion. To be sure, no deals have been cinched for the other elements, but Mayor Bill Finch said Bass Pro Shops would serve as a catalyst for what he describes as Bridgeport’s biggest initiative since the Industrial Revolution.

Hitching the city’s hopes to a Bass Pro shop (boats are sold in a showroom, not in the water) is just the start. There’s also corruption and decades of delays, along with the destruction of hundreds of homes and businesses. And the story of Steel Point is just an exaggerated version of Development Project Gone Bad that’s played out in cities across the U.S. Homes and businesses are still being forced out with eminent domain so that cities and their private partners can stumble around for decades while they figure out what to do with the land. Bridgeport says it will build more than 1,000 new housing units and more commercial space, yet it started condemning businesses and 270 houses a generation ago, in the 1990s. All it has to show for it so far is a Bass Pro.

Sometimes, the process lasts a lot longer than a generation. On Manhattan’s Lower East Side, eight city blocks, known collectively as the SPURA site, have sat vacant for nearly half a century after they were taken by eminent domain and demolished for an urban renewal scheme. The reason, as the New York Times detailed a few weeks ago, was that Sheldon Silver — now leader of the New York State Senate — and his allies couldn’t come to terms with the fact that the Lower East Side was becoming more black and Puerto Rican and less Jewish. For decades, they shot down any proposal for the neighborhood that included housing not targeted to Jews.

Even the project at the heart of 2005’s landmark Kelo v. City of New London case, in which the Supreme Court found that using eminent domain to transfer land to private parties in economic development projects was legal, has never been developed. Pfizer walked away from its promise to build facilities for 3,169 employees after the city and state spent $78 million acquiring and bulldozing the property. The land has sat empty ever since, except for when it was turned into a dump after Hurricane Irene.

All of these projects raise the question of whether economic development projects are really preferable to just upzoning the land and letting its private owners develop on their own. If nothing gets built, at least they can continue to live in their homes and run their businesses, and it doesn’t cost the government anything.