BART Strikes Suck, But Banning Them Is Even Worse (Just Ask New York) – Next City

BART Strikes Suck, But Banning Them Is Even Worse (Just Ask New York) 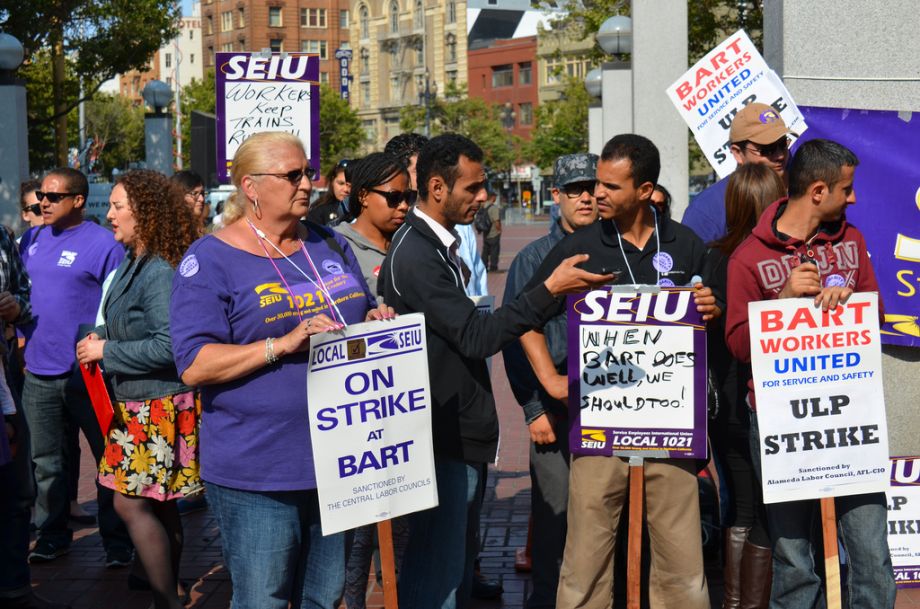 Hundreds of thousands of Bay Area commuters are getting used to going to bed at night without knowing how they’ll get to work in the morning. California Gov. Jerry Brown’s 60-day “cooling off” period after the last Bay Area Rapid Transit strike has ended, and the BART workers’ union is still holding out the threat of another strike.

Beyond disagreements over benefits and how much employees should have to pay for them, BART management wants to give workers a 10 percent wage increase over the next four years, which will just about keep pace with the rate of inflation, while union officials want a 21 percent bump over the next three. Meanwhile, the union representing workers at AC Transit, serving bus riders in Oakland, Berkeley and cities across the East Bay, has issued a strike threat of its own for Thursday.

The public, meanwhile, is overwhelmingly of the opinion that BART’s union has overplayed its hand. In a poll conducted last week by the local CBS affiliate, 54 percent of respondents said that the union should accept management’s offer, while only 16 percent said management should accept union’s offer. The remainder either said that the two sides should continue to negotiate, even if it means a strike, or were unsure.

In one brutal statistic, union members across industries in the Bay Area were actually slightly more likely than non-members to say that BART’s union should accede to management’s demands, with 56 percent saying so.

The union’s strike in August and continued threats this week have in fact turned the public against the idea of strikes altogether, with 53 percent of respondents saying that they would favor a change to California law to forbid strikes by public transit workers, compared with 38 percent who support their right to strike.

While this is an understandable urge given the widespread opposition to the strike, New York’s experience with banning strikes suggests that it may backfire.

But in exchange for the ban on strikes, the state required that employers show good faith by maintaining the terms of expired contracts while new ones are hammered out. This eventually came to cover everything in the old contract, from basic things like wages and benefits down to the price that workers pay for parking.

The Triborough Amendment, as the never-ending contract provision is called, has led to stalled negotiations across the state between employers and unions, including city transit workers. They’ve been “without” a contract — that is, laboring under their old one — for coming up on two years in January. The amendment means they have no reason to settle for anything less than the status quo, no matter how dire the fiscal situation.

This has played out, among other places, in the size of each subway train’s crew. For more than a decade the MTA has wanted to phase out conductors, leaving just the operator to drive and control the doors — a practice common in other U.S. cities and abroad. But an arbiter has ruled that the contract does not allow the MTA to impose one-person train operation on its unions. Because of the Triborough Amendment, the authority has no leverage to push changes there or with any other work rule (its commuter railroads have even more conductors on each train).

The threat of strikes, though, pushes parties toward negotiation. New York’s subway workers could easily remain on their expired contract a year from now, whereas BART and AC Transit will surely have reached agreements with their unions by then.

Strikes also have a way of shining light on the issue and involving the public in negotiations. Polls signal to management and unions whose position would have support if it came to a strike. Had polls gone the other way in the Bay Area, for example, and showed the union with more support, it’s likely that BART would have acceded to its demands, or workers would be on strike right now. As it is, the polls show very little support for the union, which keeps returning to the bargaining table.

Europe also provides an interesting counterpoint to the idea that banning strikes is necessary for efficient labor relations. Unlike New York, France and Finland have plenty of transit strikes. But also unlike New York, their transit unions have acceded to work rule changes that improve efficiency when the public demands.

While New York struggles to get subway workers to agree to drop from two employees per train to one, Paris and Helsinki are working toward removing all staff from trains. Paris has gone driverless on two of its Métro lines and is working on a third, while Helsinki is dropping operators in favor of machines on its metro in two years.